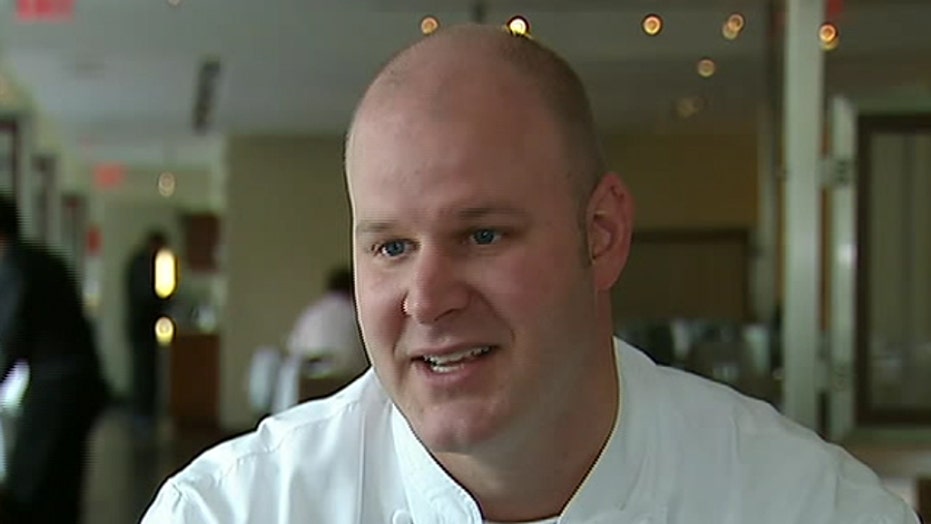 For a guy who grew up on a diet of meat and potatoes in Upstate New York, Scott Drewno's journey to becoming one of the country's most acclaimed chefs of Asian food started, not with a trip abroad, but when he began working for a man he calls a visionary.

Scott Drewno, executive chef at The Source in Washington, D.C., fell in love with Asian food when he landed a job for Wolfgang Puck’s famed Chinois restaurant in Las Vegas. Drewno told Kitchen Superstars that when he walked into the kitchen at Chinois, he became mesmerized by the sights and smells of an Asian kitchen.

“Woks, whole roasted ducks, ginger and all these things that I’ve never been exposed to, I just fell in love with it,” said Drewno.

But this giant of the kitchen (he stands over 6 ft. tall) credits his mother and grandmother for first exposing him to the kitchen. Drewno said growing up, he could always be found in the kitchen for Sunday night family dinners and big holiday feasts.

Drewno first pursued a career in criminal justice, adding that 20 years ago a career as a chef didn't hold the same importance as it does today. But the kitchen kept calling him and in 1996, after two years of college, he quit and moved to Las Vegas.

He first worked at Chinois, then was promoted to executive sous chef at Spago, another one of Wolfgang Puck’s restaurants in Las Vegas known for seasonal American cuisine. Drewno left Las Vegas for New York in 2001 to expand his Asian culinary skills. In the Big Apple, Drewno cooked at Vong and later at Ruby Foo’s.

Today, he's part of an executive team that Wolfgang Puck handpicked himself. Drewno has earned many accolades for his culinary excellence, including The Restaurant Association of Metropolitan Washington (RAMW) “Chef of the Year” in 2010.

Eating at The Source has that feel of excellence. Fine diners enter the restaurant and are presented with a sleek, modern design. There are white lounge chairs at the bar on the first floor. The glass wine wall leads guests to the second floor dining room.

But The Source's menu makes this place a stand out among other D.C. restaurants, which includes favorites such as suckling pig and mouth-watering Bao Buns.

“What we do is try to take a Chinese dish that's a traditional Chinese dish and modernize it and make it applicable for the fine dining setting, while staying true to the flavor profile and the integrity of what the dish stands for,” said Drewno.