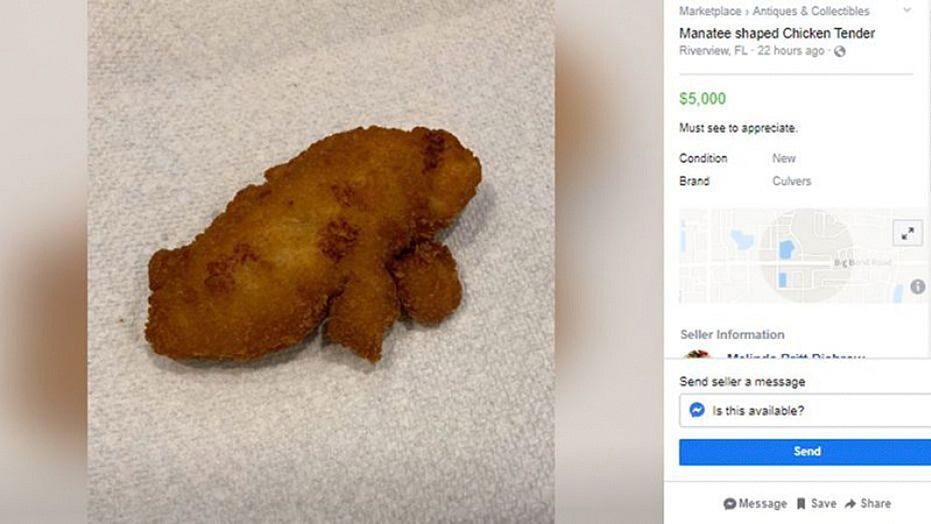 You don’t see a chicken tender like this every day!

It’s always a good idea to examine your food before you eat it because you never know what you’re going to find. For example, one woman apparently found a chicken tender she believes is worth five grand.

The listing was posted to the Facebook Marketplace by Melinda Britt Disbrow, who bought the tender from a Culvers near the Manatee Viewing Center at Apollo Beach, Fla.

On the listing, which is filed under the “Antiques and Collectibles” category, Disbrow wrote, “Must see to appreciate.” She also listed the tender as being in “new” condition.

While some outlets are reporting that the listing is no longer active, Disbrow confirmed that it’s still live. She says that it’s been viewed over 5,800 times and she’s received over 500 messages.

While five grand might seem like a lot for a chicken tender, Disbrow is planning on putting the money to good use. According to her, if the tender sells, she’s going to donate the proceeds to an organization that supports manatee preservation, “most likely Savethemanatee.org.”

Disbrow told Fox News that the response was, "Beyond surprising! Something that was done out of fun and good humor turned into this. Grateful that I can use this strange and quirky platform for something amazing."

This might be the priciest chicken story of the new year, but 2019 saw some expensive chicken as well.

In early December, Popeyes submitted one of their chicken sandwiches duct-taped to a wall to the Art Basel Miami Festival.

A spokesperson for Popeyes confirmed to Fox News that the Chicken Sandwich was included as a piece in the famous art festival. Like the infamous banana, the popular sandwich was duct-taped to a canvas.

The piece, officially named “The Sandwich,” is listed at $120,003.99 and is being described as “a mixed media work of art consisting of a toasted brioche bun, two pickles, fried chicken, mayo and duct tape over a canvas.”