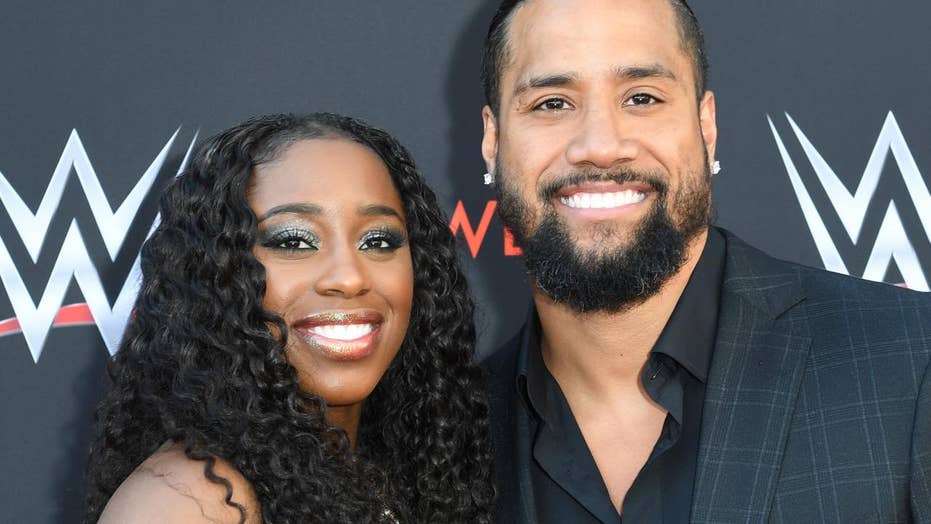 The 33-year-old son of WWE Hall of Famer Rikishi and his wife, WWE superstar Naomi, were pulled over near downtown Detroit after cops say Naomi was driving the wrong direction on a one-way street.

According to the gossip site, Uso, 33, whose real name is Jonathan Solofa Fatu, and his wife, fellow WWE star Naomi, 31, were pulled over near downtown Detroit after police claim Naomi (real name Trinity Fatu) was driving in the wrong direction on a one-way street.

The outlet reports that after pulling over the couple, law enforcement alleged the Usos' vehicle smelled of alcohol – and Naomi was ordered out of the SUV. However, while she was speaking with police, Jimmy is said to have exited the vehicle despite being ordered by authorities to stand down.

WWE STAR PAIGE TALKS SEX TAPS, SAYS, 'I DON'T WISH THAT FOR ANYONE'

Per the outlet, authorities claim Jimmy removed his shirt and jacket, and “squared up like he wanted to fight,” prompting the officer to pull his stun gun because he feared for his safety.

Jimmy eventually calmed down and complied with the officer’s commands, and was handcuffed and taken into custody, reports said.

Uso was arrested on charges of disorderly conduct and obstruction. He later posted bond.

This isn’t the first time Uso has been involved with the law. He was booked on DUI charges in 2011, and again in 2013 after he violated his probation by driving on a suspended license. Last year, Uso’s brother, Jey – his real name is Joshua Samuel Fetu – was arrested on charges of driving while intoxicated following a live WWE event in Hidalgo, Texas.

A source closely connected to the WWE told Fox News on Thursday, "Uso and his wife want to get fired by the WWE, so this arrest just might be the shoe that drops."

According to the source, a new wrestling entity called All Elite Wrestling has drawn much interest from a number of wrestlers currently under contract with the WWE.

The Uso Brothers are multiple-time WWE SmackDown tag team champions and are slated to take on The Miz and Shane McMahon for the coveted belt at Elimination Chamber, at the Toyota Center in Houston on Sunday.