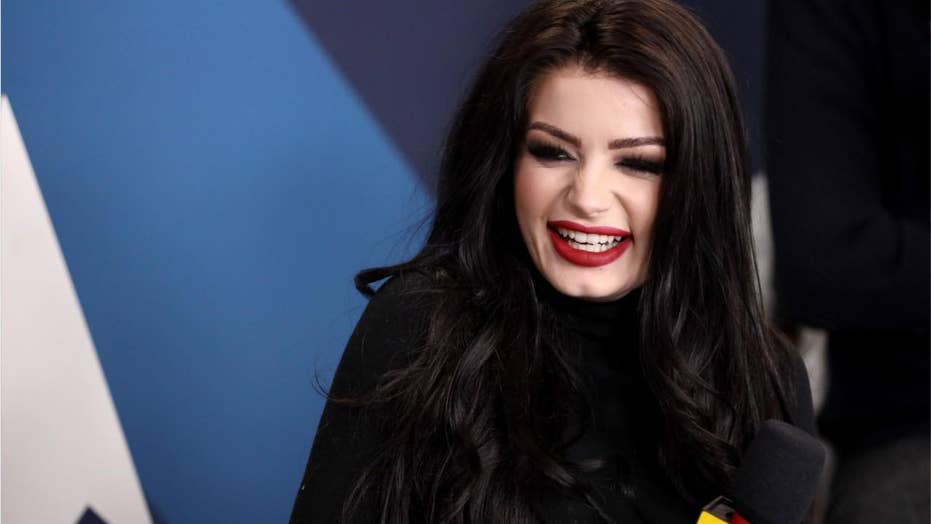 WWE star Paige talks sex tape, says, 'I don’t wish that for anyone'

WWE star Paige, 26, was one of the biggest stars in pro wrestling, but after a sex tape, depression, and anorexia, a new film, 'Fighting with my Family,' recounts her ups and downs in and out of the ring.

She was once one of the biggest stars in the pro wrestling business, but by 2017, she had become depressed and nearly suicidal.

She locked herself away from the public and her family. She became sickly and was treated for anorexia. Her hair started falling out.

But a chance encounter with a young fan at a grocery store turned it all around for Paige. Now the former wrestler is back on top in a big way with a biopic chronicling her improbable story.

Friday’s “Fighting With My Family” reveals how Saraya-Jade Bevis, a young outcast from Norwich, England, was plucked from a D-list wrestling company run by her ex-con father to become a superstar in World Wrestling Entertainment.

“You forget what you’ve been through in your life, so watching it back was very surreal,” Paige, 26, tells The Post.

It’s one of those stories that’s so outlandish, it could only be true. (Produced by Dwayne “The Rock” Johnson, who also has a small role, the film is written and directed with dry British wit by Stephen Merchant, co-creator of the original British “The Office.”)

Paige (played by Florence Pugh in the film) knew her childhood was a little bit different.

Her father (played by Nick Frost) and her mother (Lena Headey) ran England’s World Association of Wrestling that staged matches in modest venues.

When Paige was 13, one of her father’s wrestlers failed to show up for a match, so she was tapped to fill in.

“Before that, I didn’t really want to wrestle. I was terrified,” Paige says.

Getting in the ring, though, sparked the “biggest euphoric adrenaline feeling.”

“Even though there was, what, like 10 people in the crowd, it made me feel good,” she says. “You could be anyone you wanted to.”

She was eventually offered a chance to try out for the WWE. Paige thought it best to completely overhaul her look for the audition.

She was pale with piercings and jet-black hair. She dressed in all black. But for the WWE, she got tan, dyed her hair blond and wore a colorful outfit.

The coaches saw through her fakery and declined to offer her a contract.

A few months later, she was given another audition, and this time — mostly on the advice of her brother, also a wrestler — she decided to be herself.

The change paid off and she was offered a spot.

“It took me a while to realize that being me was my superpower,” Paige says.

For her ring name, she chose Paige as an homage to Rose McGowan’s character from the 2000-era series “Charmed.” She made her debut in 2014 on an episode of “WWE Raw,” and won a championship belt her first time out.

But her success caused some friction with her brother (played by Jack Lowden), who had failed to make it to the WWE.

He now runs a wrestling academy in England — where he even trained a blind wrestler — and is content.

“Success isn’t measured by how many cameras you’re in front of,” Paige says. “It’s a success story to be at home with a family and to have a job where you’re helping people. They shouldn’t measure success on how famous you are.”

Of course, fame also has its downsides. In 2016, the wrestling diva was twice suspended for violating WWE’s wellness policy, including for testing “positive for an illegal substance” according to WWE. Then, in 2017, sex tapes of her were illegally posted online by hackers.

“To be publicly humiliated like that was terrible, and I don’t wish that for anyone,” she says.

The leak coupled with a wrestling injury sent her spiraling into depression.

“I didn’t go to work; I didn’t do anything. I felt so rock bottom,” she says.

Then, one day, she was at a local grocery store in Texas, where she was living at the time, and was approached by a young female fan who was about 7 years old.

“Of course, she didn’t have the internet and thought I was the most beautiful and most successful woman in the world,” Paige says. “It opened my eyes to so many things. I was like, ‘I’m gonna let videos get in the way of things?’ ”

“I thought, what am I doing? I need to be successful for her. My whole journey was supposed to be about inspiring people,” she says.