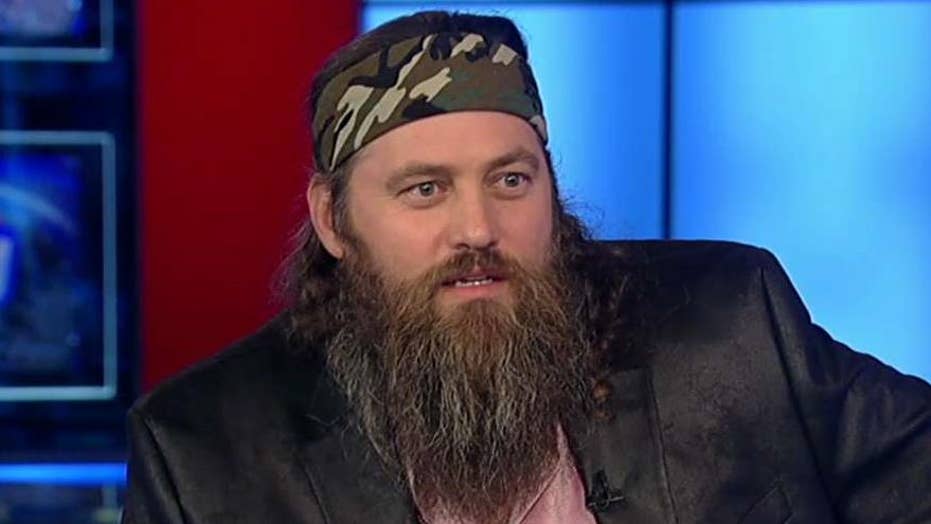 On 'Hannity,' the 'Duck Dynasty' star opens up about his book, election outcome

Willie Robertson is a busy man. As the final season of "Duck Dynasty" airs, Robertson has a new TV show in the works with the irrepressible Uncle Si and a new book out titled "The American Fisherman: How Our Nation's Anglers Founded, Fed, Financed and Forever Shaped the U.S.A." The 44-year-old reality star spoke to FOX411 about his projects and about President-elect Donald Trump, who he campaigned for.

FOX411: You must be very happy with the election. Did you call Donald Trump to congratulate him?
Willie Robertson: No, I didn't. I'm sure I will at some point. We'll try to get together and meet up at some point.

FOX411: Planning on more trips to Washington DC?
Robertson: I don't know, we'll see! I get there some and I'm sure if something comes up I'll try to make myself open.

FOX411: Does it upset you seeing the country so divided?
Robertson: Yeah, it does. I think hopefully we can work together and give the new President a chance and see what can happen.

FOX411: Do you think now that Trump is going to be President there will be more talk of God and faith in the White House?
Robertson: We'll see. I know a lot of people voted for President-elect Donald Trump, and he knows that. Obviously there's separation of church and state for a reason. I think many Christians just want their rights protected as believers and hopefully that can continue to happen.

FOX411: What are you most looking forward in his Presidency?
Robertson: Hopefully they'll be some change in really how we do politics -- that's one of the things that attracted me to him. Hopefully he'll cross the aisle and work with some Democrats, and we can get some things done. I'm excited about that and maybe less of the special interest and less big money. He doesn't owe anyone any favors so hopefully we'll see.

FOX411: What are the issues you care about the most?
Robertson: Probably the most is the Supreme Court -- the balance of the Supreme Court. Another big concern I have is the economy, the debt, our jobs. I was lobbying hard for a businessman to get in there. He knows business. He's had success. So I'm hoping he can in there and apply the right people, smart people, and get some good deals going... a lot of people need jobs.

FOX411: You have a new show?
Robertson: It's called "Going Si-Ral" with myself and my Uncle Si. It's about the Internet. My Uncle Si's kind of wondering about the Internet so we watch Internet clips, and it's just a fun family show. We recreate some clips. We play games. We shot it, and put it out there and see what the people think. I think it will go great with "Duck Dynasty" because of the wholesome nature of the show, and it's a funny show.

FOX411: He knows nothing about the Internet?
Robertson: He doesn't have a computer or a phone so he's really never been on the Internet. He really has no knowledge of it.

FOX441: How did your new book come about?
Robertson: We had written this book last year, "American Hunter,” and it did well, and we wanted to follow it up and we thought “what about fishing?” We did some research and found a wealth of information about fishing and how it really impacted America.

FOX411: Are you a fisherman?
Robertson: I am. Way before duck calls, my father was a commercial fisherman so we grew up fishing. It was our livelihood. It was kind of easy to think about fishing in that manner.