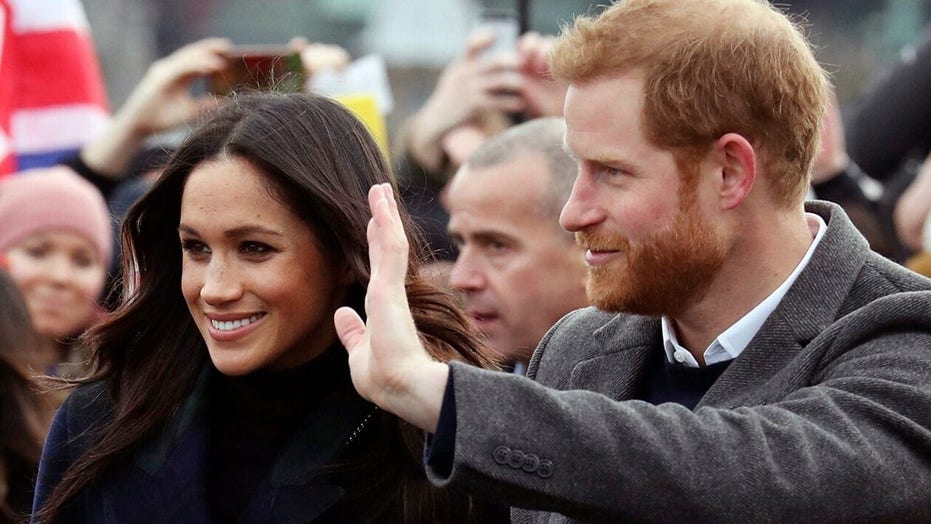 Prince Harry, Meghan Markle back in Britain for final round of royal engagements

Harry and Meghan return to London for a bash celebrating the sporting achievements of wounded servicemen; Benjamin Hall reports.

An MSNBC guest has sparked outrage online after calling Meghan Markle “five clicks up from trailer trash” in an interview that aired Saturday.

The “MSNBC Live” segment, which has gone viral, showed British journalist Victoria Mather being interviewed from NBC’s London bureau about the Duchess of Sussex and her husband Prince Harry returning to the U.K. after their January decision to step back as senior royals, Deadline.com reported.

Mather, who was identified in the video as a “Vanity Fair Royals Watcher,” told anchor Lindsey Reiser that the former “Suits” star has been “disrespectful” to the British royal family, particularly Queen Elizabeth II, Harry's grandmother.

“I think what has really, really upset the British public is that Meghan Markle, who many people consider as only, you know, five clicks up from trailer trash, has actually tried to disrespect the queen,” said Mather. “And the queen is the most respected person, most respected woman, in the world.”

Reiser, who appeared stunned by the statement, quickly ended the interview.

Mather, who currently writes for Air Mail, didn’t correct Reiser when she was introduced as a “royals watcher” for Vanity Fair. A spokesperson for Conde Nast, the publication’s parent company, told BuzzFeed News Mather has not been employed there since 2018. The outlet also shared that her current employer, Air Mail, was founded last year by former Vanity Fair editor-in-chief Graydon Carter.

The outlet also noted that while Mather’s title at Air Mail is “chief travel correspondent,” she wrote about the royal family for the magazine in September 2019. In her story, Mather described Markle, 38, as “the Duchess of Excess,” while referring to Harry, 35, as “the naughty boy we loved, the soldier who served bravely in Afghanistan” who is now “the Prince of Wokeness.”

“Catherine [Duchess of Cambridge] comes from a stable, close-knit family,” wrote Mather at the time. “Meghan comes from a sadly dysfunctional family, leading her to being unpleasantly trolled as trailer trash. Her soi-distant acting career most recently included a part in a cable-TV series — filmed mostly in Canada, no less! It’s not exactly Grace Kelly, but the British public willed her to be a similar fairy-tale princess.”

Many viewers criticized the interview and described Mather as both “racist” and “disgusting.”

“@MSNBC Thank you for having on Victoria Mather MSNBC London office this morning,” tweeted one viewer. “Interview was COMPLETE validation Meghan and Harry made the right choice to leave Royal Family. Ms. Mather needs to retire because she is terminally sick with vitriol. Her comments were evil.”

“@MSNBC should apologize to Meghan Markle," added another. “And to their viewers.”

“I am just curious: do u have kids????” tweeted one user to Mather. “Is that the example you've given them all those years while they were growing up? Because if the answer to this question is yes, believe me, Vicky, I am gonna start praying for them.”

The royal couple’s announcement in January came just months after they opened up to host Tom Bradby in ITV’s documentary “Harry & Meghan: An African Journey,” which aired in October 2019 in both the U.K. and U.S.

While the special aimed to give audiences a behind-the-scenes glimpse into the couple’s royal tour of southern African, the pair also spoke out about enduring ruthless tabloid rumors as new parents.

They welcomed a son named Archie Harrison Mountbatten-Windsor in May 2019. The baby’s arrival came a year after the couple tied the knot in a televised royal ceremony in May 2018.

MEGHAN MARKLE, PRINCE HARRY RETURN TO THE UK FOR THE FIRST TIME TOGETHER SINCE MEGXIT ANNOUNCEMENT

Piers Morgan previously slammed Meghan Markle and Prince Harry for announcing they would take “a step back” as senior members of the royal family. (Getty)

“I think the grass is always greener,” explained the former Hollywood actress. “You have no idea. It’s really hard to understand what it’s like. I know what it seems like it should be, but it’s a very different thing.”

Markle also pointed out it’s been frustrating to see her name — along with her family’s — in headlines concerning stories that she stressed just aren’t true.

DAVID BECKHAM ON PAL PRINCE HARRY: 'I'M PROUD TO SEE HIM GROWING UP'

“Look, part of this job and part of any job, like everybody, means putting on a brave face and turning a cheek to a lot of the stuff,” he explained. “But again, for me and my wife, of course, there’s a lot of stuff that hurts — especially when the majority of it is untrue.”