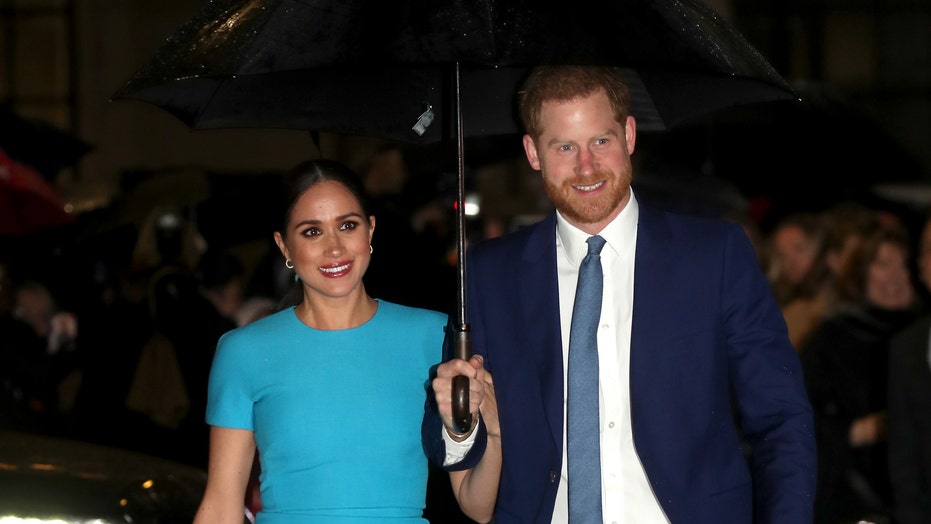 Meghan Markle and Prince Harry made an appearance in the United Kingdom together on Thursday for the first time since announcing they were stepping back as senior members of the royal family.

The Duke and Duchess of Sussex were spotted beaming from ear to ear Thursday afternoon as they stepped out of The Goring, a five-star hotel not far from Buckingham Palace. An official at The Goring declined to comment on whether or not the royal pair are, in fact, hotel guests when reached by Fox News.

The photos showed Prince Harry donning a navy suit while Meghan was wrapped in a nude coat and wore black pumps. The two were assisted by men holding umbrellas over their heads and The Sun reported Prince Harry left the hotel shortly after Meghan.

Fox News confirmed that Meghan and Harry were only at the hotel for lunch.

Later on Thursday night, the couple was spotted looking happier than ever at one of their last royal engagements -- the 2020 Endeavour Fund Awards. Meghan stunned in a light blue Victoria Beckham dress.

INSIDE MEGHAN MARKLE'S NEW LIFE IN CANADA AMID MEGXIT

It marks the first engagement of several before March 31 which is the official date they will no longer need to fulfill their royal duties.

The royal couple is fulfilling the last of their royal duties before stepping back into a more private life.  (Karwai Tang/WireImage)

Their next event will be Commonwealth Day in London on Monday where they will join Queen Elizabeth, Prince Charles and Prince William and Kate Middleton in services in London.

While in the U.K., Frogmore Cottage is Meghan and Harry's U.K. home and it is owned by the queen. The official Sussex Royal website confirmed the couple would continue to use it when they return there.

Prince Harry, Duke of Sussex and Meghan, Duchess of Sussex will celebrate the achievements of wounded, injured and sick servicemen and women who have taken part in remarkable sporting and adventure challenges over the last year.  (Paul Edwards - WPA Pool/Getty Images)

Meghan, Harry, and their son Archie plan on splitting their time between Canada and England in the future.

In February, a spokesperson for the Duke and Duchess of Sussex told People: “The Duke and Duchess will be spending their time in both the United Kingdom and North America. In addition to continuing to work closely with their existing patronages as they build a plan for engagements in the U.K. and the Commonwealth throughout the year, The Duke and Duchess have also been undertaking meetings as part of their ongoing work to establish a new non-profit organization. The details of this new organization will be shared later in the year.

“In general, the themes of their cause-related work will remain unchanged, which includes the Commonwealth, community, youth empowerment and mental health, collectively," the spokesperson added.