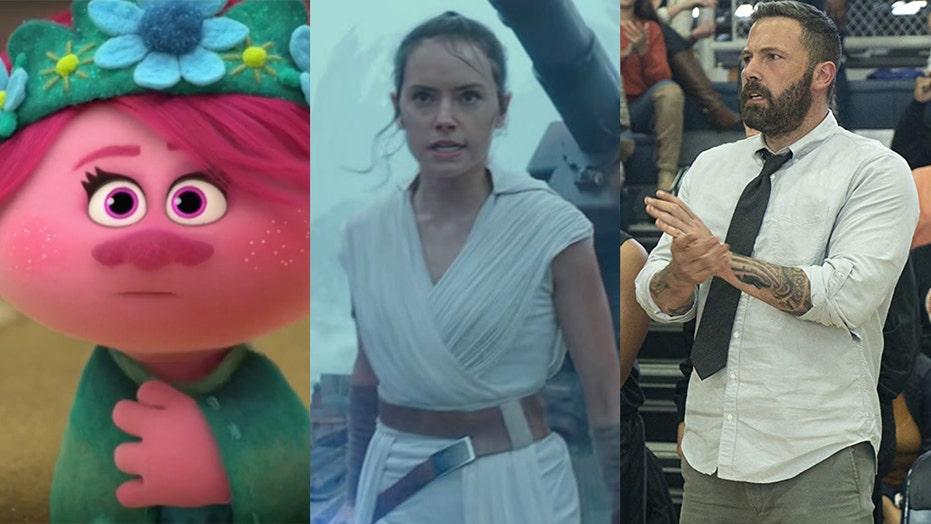 Hollywood studios are being forced to get creative as coronavirus wreaks havoc on the entertainment industry.

Major motion pictures such as "Black Widow" and "Mulan" have been delayed for a few months, which will certainly backlog the second half of the year as blockbusters compete for a slot on the calendar.

Another solution that's making the rounds in Hollywood is releasing the movies early on home entertainment — meaning they'll be available sooner rather than later for either rental or purchase on services such as iTunes and Amazon. Most rentals and purchases are expected to run around $20.

Here's a look at the films that are releasing early on demand:

"Frozen II" was released in the U.S. on Nov. 22, 2019, which means it was due for a digital release relatively soon anyway, but Disney chose to release the film online a bit earlier than expected.

The film is now available to stream on Disney+ and can be rented or purchased via iTunes, Amazon, YouTube and other popular video-on-demand (VOD) services.

"Star Wars: The Rise of Skywalker"

Another Disney property determined to entertain those in self-isolation, "Star Wars: The Rise of Skywalker," was released digitally on March 13, according to Variety.

The science-fiction epic is not available on Disney+ but can be purchased for $19.99 on VOD platforms.

Set to debut digitally the same day it hits theaters (the ones that are open, at least), "Trolls World Tour" became available on April 10.

The film is the first to debut theatrically and digitally on the same day but could set a precedent for future films as self-isolation suggestions remain in effect.

Margot Robbie in a scene from "Birds of Prey." (Warner Bros. Pictures via AP)

"Birds of Prey" was released to low box office numbers in February, but perhaps viewers will tune in from home.

The Vin Diesel film has been available to stream since March 24.

CANNES FILM FESTIVAL POSTPONED DUE TO THE CORONAVIRUS PANDEMIC

Betty Gilpin in 'The Hunt.' (Patti Perret/Universal Pictures via AP)

"The Hunt" has had a storied journey to its release.

Since the film finally hit theaters, it was also available on VOD platforms as early as March 20.

Also already in theaters, "The Invisible Man" stars Elizabeth Moss as a woman convinced she's being hunted by a man no one can see.

The film started streaming on March 20.

The film was ready to stream on March 20.

A faith-based story about a musician, "I Still Believe" followed suit with its fellow March releases.

The film has been available on VOD services since March 27, according to Variety.

The flick has been available since March 24.

Ben Affleck in 'The Way Back.' (Warner Bros.)

It was announced that "The Way Back," starring Ben Affleck as an alcoholic tapped to coach a basketball team will be released early for purchase.

The film has been available since March 24 for $19.99, according to Deadline.

Characters Laurel, voiced by Julia Louis-Dreyfus, from left, Ian, voiced by Tom Holland, and Barley, voiced by Chris Pratt, appear in a scene from "Onward."  (Disney/Pixar via AP)

On April 3, it became available to stream on Disney+. The animated film is about two elf brothers on a magical quest to bring their father back.

"While we're looking forward to audiences enjoying our films on the big screen again soon, given the current circumstances, we are pleased to release this fun, adventurous film to digital platforms early for audiences to enjoy from the comfort of their homes," director Dan Scanlon and producer Kori Rae said in a statement.

Sonic the Hedgehog is voiced by actor Ben Schwartz.  (Paramount)

Paramount Pictures announced that "Sonic" would be available early for digital release on March 31.

It made over $300 million dollars at the global box office and has become the highest-grossing video game film in U.S. box office history.

Martin Lawrence and Will Smith in 'Bad Boys for Life.' (Sony Pictures Entertainment)

Sony Pictures' "Bad Boys for Life" -- the highest-grossing film of the year so far according to Box Office Mojo -- will also be available on demand early.

The film, a follow up to "Bad Boys" and "Bad Boys II" starring Will Smith and Martin Lawrence, was available to stream starting on March 31, according to Variety.

"Call of the Wild"

Disney has chosen to release another movie early for on-demand streaming: "Call of the Wild."

The Harrison Ford vehicle about a dog that's uprooted from his home and taken to Alaska became available to stream on March 27 for $14.99, per Variety.

Will Ferrell and Julia Louis-Dreyfus in 'Downhill.' (Searchlight Pictures)

The comedy starring Will Ferrell and Julia Louis-Dreyfus is now also among the films that will make their way to streaming early.

The flick hit on-demand streamers on March 27 for $9.99, according to Variety.

“The King of Staten Island,” starring Pete Davidson and directed by Judd Apatow, is releasing straight to home on-demand video after having its theatrical release canceled.

Universal Pictures said that the film will debut as a $20 rental on digital platforms on June 12.

Davidson, 26, co-wrote the semi-autobiographical “The King of Staten Island,” a comedy about a young man living at home with his mother (Marisa Tomei) on New York’s Staten Island.