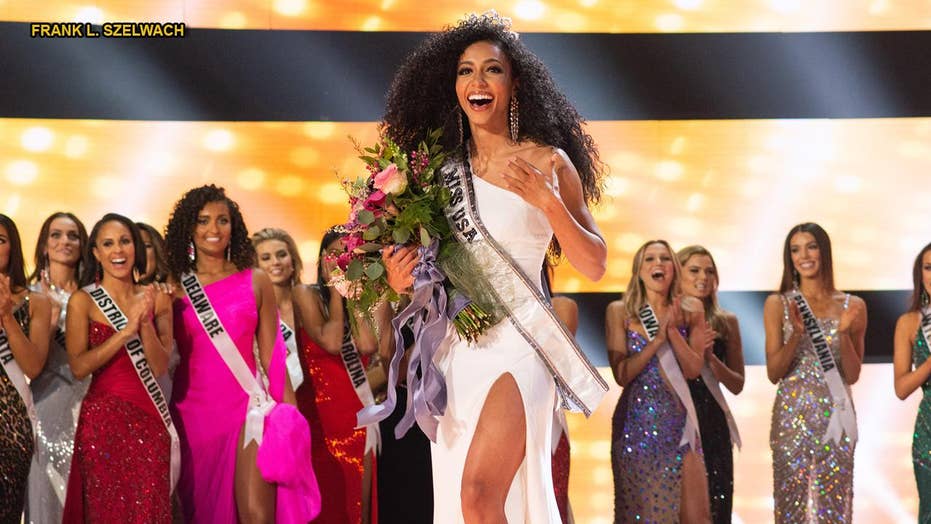 Miss USA 2019 Cheslie Kryst talks making history, how she overcame a wardrobe malfunction during the swimsuit competition and how she feels about Kim Kardashian's dreams of becoming an attorney.

Cheslie Kryst and Kaliegh Garris couldn’t be prouder to be Americans.

When Kryst, a North Carolina lawyer, won the Miss USA crown, it marked more than just a personal triumph in the 28-year-old’s career. It meant that for the first time, three black women are the reigning Miss USA, Miss Teen USA and Miss America.

Kryst and Garris told Fox News they hope to inspire others to proudly embrace the country they call home.

“Seeing people unite to win justice for others makes me proud to be an American,” said Kryst. “My stepdad, an attorney, recently worked to get a pro bono client released from prison after being behind bars for 18 years, with some help from Brittany Barnett of the Buried Alive Project. My stepdad is a busy father who coaches my brother’s football team and has an incredibly heavy workload at his firm.”

“Despite the hectic life he lives, he made time to fight for others who needed his expertise, time, and energy,” she continued. “His and Brittany’s work and their decision to fight for others make me beam with pride that Americans are willing to help our brothers and sisters who are in need.”

MISS UNIVERSE CATRIONA GRAY EXPLAINS WHY SHE DISAPPEARED AFTER WINNING

“I am proud to be an American because I live a country where I have freedoms!” shared Garris. “I have the freedom to love who I love, I have the ability to express myself through movement and have the right to speak my opinion.”

Garris, from New Haven, Conn., won her crown in April and hopes to become a trauma nurse. Kryst, a former Division I athlete and attorney at Poyner Spruill LLP in Charlotte, N.C., won her crown in Reno, Nev. She holds an MBA from Wake Forest University.

“Mine is the first generation to have that forward-looking mindset that has inclusivity, diversity, strength and empowered women,” said Kryst earlier this year after accepting her crown. “I’m looking forward to continued progress in my generation.”

Kryst previously told Fox News that as Miss USA, she’s eager to raise awareness on Dress for Success, a nonprofit organization that helps women by providing clothing for interviews, as well as supporting their economic advancement. She also remains just as passionate about the criminal justice system.

Before winning, Kryst served as a civil litigation attorney who also volunteered her services for people who were unjustly sentenced. She originally began her career in September 2017.

These days, Kryst is not only eager to be the new face of Miss USA, but also show Americans holding the title means much than wearing a crown or sash.

“I’m an attorney,” she said. “I have three degrees. I have a law degree, MBA and undergrad degree. And throughout the entire pageant, rather than focusing on what I looked like, what my body looked like, and whether or not I was cool to look at, the Miss Universe organization celebrated all of my accomplishments…. We all got a chance to… talk about issues that were important to us. And so, I don’t think that the Miss Universe organization is the same organization that people think it is. It really is about celebrating women, and giving us an opportunity to advocate for issues important to us.”