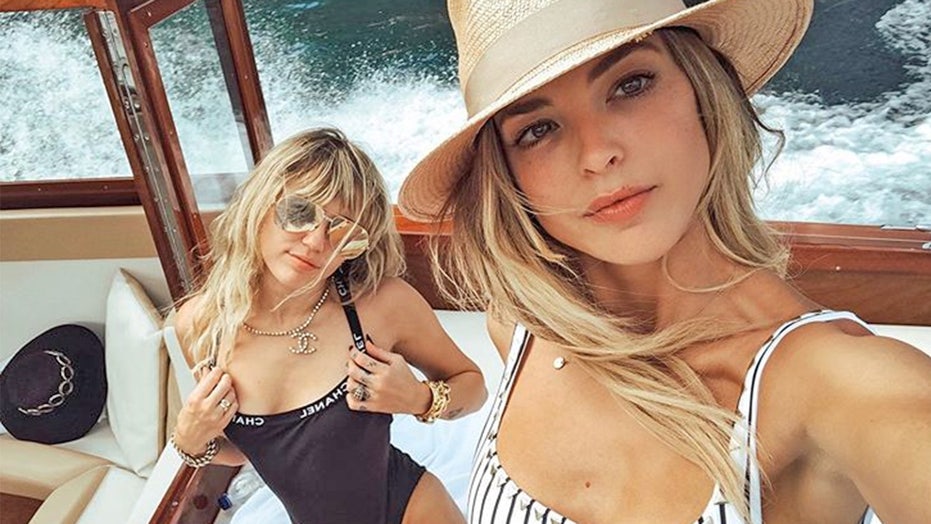 Miley Cyrus has commemorated her recent getaway with Kaitlynn Jenner by getting a tattoo.

While most people may buy a souvenir, the singer, 26, took their romantic trip one step further by inking her arm with the biscoine- the emblem of the House of Visconti and the symbol of the city of Milan.

Sharing a snap of Miley's new tatt on Instagram, her tattoo artist Dr. Woo gave showed off his latest work.

The tattoo shows a snake consuming a child, but followers went on to confirm its true meaning.

One wrote: "This is the Visconti (simbol the city of Milan) coat of arms! Beautiful, dream of a tattoo made by you."

The pair were spotted getting close on a yacht in Lake Como during a girls' getaway, just days before Miley revealed she had split from her husband of seven months.

And while sources close to the singer claim that she "wants to start a relationship" with the blonde, Kaitlynn's ex, Brody Jenner, seemingly confirmed the stars are already together.

Sharing a snap of a weed bouquet from Lowell Farms on Instagram Stories, Brody showed off the couple's joint present as he celebrated his 36th birthday.

The personally-written card from the pair wrote: "Brody, weed like to wish you a happy birthday. Love you."

Kaitlynn and Brody split a year after they were married in an unofficial ceremony in Indonesia last August.

TMZ reported that the blonde beauty wanted to start a family and make their nuptials legally binding but Brody decided against both.

Last week, it was reported Miley and her new squeeze "basically had sex" all over a Hollywood club.

Speaking to Page Six, a source revealed: "They were kissing and making out everywhere. In the bathroom, at the bar, in the middle of the floor. They were basically having sex. There’s no question they’re together."

The news of Miley's quick moving relationship will no doubt come as a blow to actor Liam, 29, who filed for divorce this week.

TMZ later reported that Miley battled "valiantly" to save her and Liam's seven-month marriage, but struggled to accept his heavy drinking and "use of certain drugs" - which he has strongly denied.

The website claimed her own past substance abuse battle made drug use a "deal breaker".

While it initially appeared Miley and Liam’s split was amicable, things seem to have turned nasty as their respective camps pumped out their versions over caused the break-up.

Meanwhile, his pals responded "bulls***' to claims that his alleged hard partying was to blame, insisting her 'infidelity" with Carter was the last nail in the coffin.