Meghan McCain and Joy Behar get so heated over Trump, Whoopi Goldberg has to step in

"View" hosts Meghan McCain and Joy Behar got so entangled in an argument on Wednesday that co-host Whoopi Goldberg had to step in to break up the fight.

McCain, 34, defended her use of the misogynist term, cracking, “Oh, Joy and I call each other b—h all the time.”

Whoopi Goldberg told the audience, “You know, sometimes we get spirited on this show. We used to say 'b—h' all the time and then one of the people that was here used to get upset, and now 'b—h' has creeped in. They’re good with 'b—h!'”

MEGHAN MCCAIN HAS TENSE MOMENT WITH WHOOPI GOLDBERG ON 'THE VIEW'

McCain added, “I just want everyone to stop being so precious about our relationship because it’s almost 2020 and women can debate on TV in a spirited way without it being personal. And I know this is a big shock, but we get along backstage.” 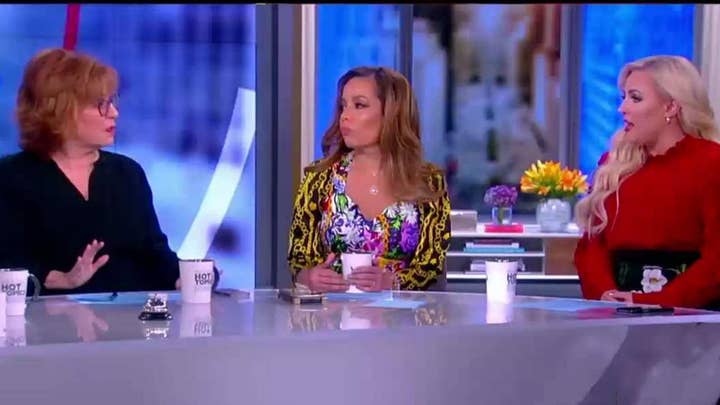 Behar chimed in, “We’re both pugilistic, and so we’re fine ... I’m very straight in what I believe, and so is she, so we’re going to fight.” She added to McCain, “I don’t care if you call me a b—h.”

“You guys can call me 'b—h' all day long,” McCain then told the crowd.

When co-host Sunny Hostin pointed out that the audience might be offended by the term, which has a long sexist history, McCain sniped, “Well, this probably isn’t the show for you if you’re offended easily."