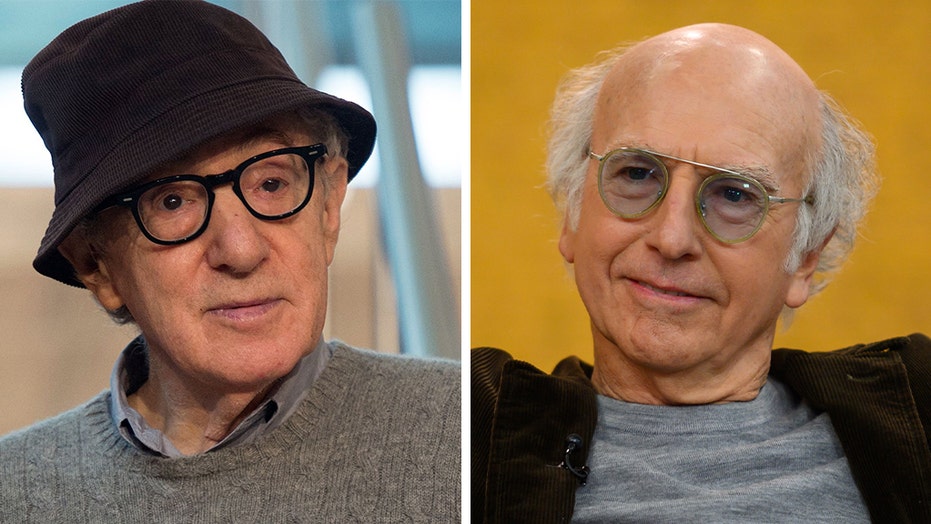 The “Seinfeld” and “Curb Your Enthusiasm” mastermind said in an interview with the New York Times that after reading Allen’s book, “Apropos of Nothing,” which was released by Arcade Publishing on March 23 after it was dropped by Hachette Book Company, that he enjoyed the read and had some pretty stout praise for Allen’s effort.

“Yeah, it’s pretty great, it’s a fantastic book, so funny,” David said. “You feel like you’re in the room with him and, yeah, it’s just a great book and it’s hard to walk away after reading that book thinking that this guy did anything wrong.”

Ronan Farrow blasted his own book publisher, accusing Hachette Book Group of 'wildly unprofessional' behavior and severed ties to the company over working with Woody Allen. The book was ultimately released by Arcade Publishing on March 23 after it was dropped by the Hachette Book Company.  (Getty)

In the memoir, which was disparaged ahead of its release by Allen’s estranged children Ronan Farrow and Dylan Farrow, the “Hannah and Her Sister” director discusses the affair he carried on with Mia Farrow’s adopted daughter Soon-Yi Previn as well as the molestation allegations levied against him by Dylan, who was adopted by Allen.

"I knew Mia was fond of telling people I had molested her underage daughter when in fact Soon-Yi was twenty-two, and of course our love, which has resulted in a marriage of over twenty years, was hardly molestation," Allen, 84, wrote, according to Vulture.

WOODY ALLEN SAYS HE HAS NO REGRETS PURSUING SOON-YI PREVIN: ‘I’D DO IT AGAIN IN A HEARTBEAT’

Per the outlet, he continued: "There are still loonies who think I married my daughter, who think Soon-Yi was my child, who think Mia was my wife, who think I adopted Soon-Yi, who think that Obama wasn't American. But there was never any trial. I was never charged with anything, as it was clear to the investigators nothing had ever occurred."

Furthermore, Allen maintains he never interacted with Dylan inappropriately but notes an instance in August 1992 at Farrow’s home in Connecticut when he placed his head on Dylan’s lap.

Dylan Farrow claimed her adoptive father molested her when she was 7 years old. (AP, File)

“I never laid a finger on Dylan, never did anything to her that could be even misconstrued as abusing her; it was a total fabrication from start to finish,” he said of the allegation before adding, “I certainly didn’t do anything improper to her. I was in a room full of people watching TV mid-afternoon," according to IndieWire.

Arcade describes “Apropos of Nothing” as “a candid and comprehensive personal account by Woody Allen of his life, ranging from his childhood in Brooklyn through his acclaimed career in film, theater, television, print and standup comedy, as well as exploring his relationships with family and friends.”

According to People magazine, Allen also wrote in the memoir that he would again absolutely jump at the chance to pursue Previn, 49, “in a heartbeat.”

“I adore Soon-Yi, and despite the huge amount of flack I got for pursuing her, it was worth every second of it,” the director wrote in his book, as reported by the outlet.

Woody Allen kisses his now-wife Soon-Yi Previn, the adopted daughter of his former lover Mia Farrow, in a gondola in Venice's Grand Canal on December 24, 1997. (Reuters)

“Sometimes, when the going got rough and I was maligned everywhere, I was asked if I had known the outcome, do I ever wish I never took up with Soon-Yi? I always answered I’d do it again in a heartbeat.”

“Soon-Yi and I had no interest in knowing about each other,” Allen reflected. “I thought she was a quiet, boring kid, and she thought I was her mom’s patsy. All that was missing was a ring through my nose.”

According to Allen, a friendship formed after they attended a basketball game together.

“[It took] a long, long time to move from square one to this mutual caring, but it would happen and surprise us both,” wrote Allen.