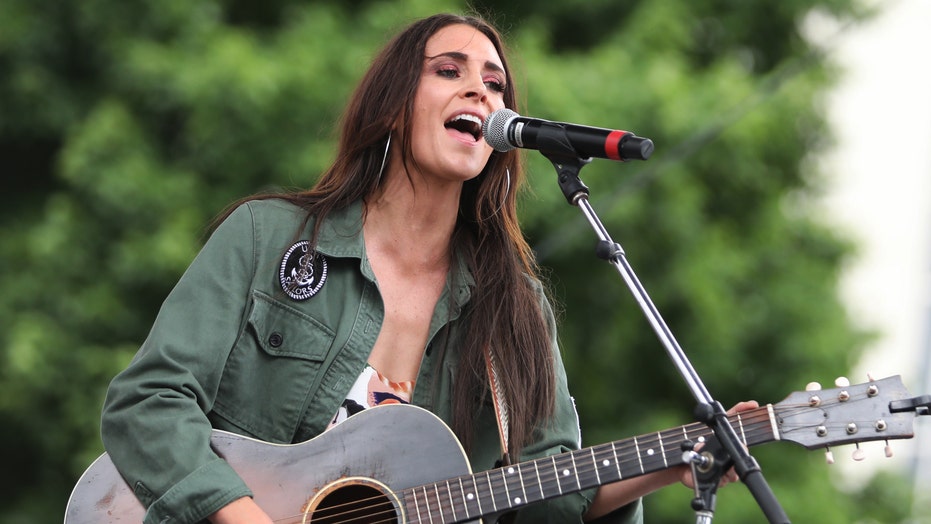 On one hand, Kelleigh Bannen has had a traditional experience with the music industry: dreaming of stardom from a young age and adoring Garth Brooks.

One the other hand, Bannen's rise to fame has been completely unconventional: not writing music until after college and finding inspiration and influence in R&B stars and movie musicals like "Gentlemen Prefer Blondes."

Bannen, 38, released her debut full-length album "Favorite Colors" on Oct. 11 and hasn't looked back since.

"It's been years in the making," Bannen said of the album. "The songs are from the last 3 years or so, and we started recording a year ago [in] May, April."

"Those songs were really what started us down this process of this album," Bannen explained. "We just felt like it was kind of sad to move on without them on the album because they kind of opened the doors to the album."

Bannen has reason to feel attached to her music. She co-wrote all 14 songs on the album, a feat not conquered by many of today's biggest artists.

"(Nashville is) such a songwriting town," said Bannen of her home. "I grew up there, so I love storytelling and I think that's what country music does at its finest. Telling real, relatable stories in great detail that makes you feel like you're there. That's what I try to do when I sit down in the writing room."

But before the singles, the EPs and the record, Bannen found herself in the midst of an unusual career jumpstart.

"I love storytelling and I think that's what country music does at its finest."

"Some of the first records I owned were Dixie Chicks albums, Martina McBride and Sara Evans," she revealed. "What's interesting about those three is that all the records I was listening to at that time were produced by Paul Worley who is a legendary producer in country music."

Bannen credits Worley, who produced her single "Sorry on the Rocks," with discovering her in Nashville.

Of course, she has always had an appreciation for artists like Garth Brooks and Vince Gill for their storytelling abilities.

However, there are other artists who have influenced Bannen's career, but not the kind you might not expect for a traditional singer-songwriter hailing from Nashville.

"The 'Miseducation of Lauryn Hill' was a huge album for me," Bannen said. "I think she's one of the truly finest songwriters and one of the fines singers that maybe we'll ever see."

Her cadre of influencers only gets wider, too, with her song "Diamonds" being heavily influenced by Marilyn Monroe's iconic performance of "Diamonds Are a Girl's Best Friend" in "Gentlemen Prefer Blondes."

"It goes back to storytelling," said Bannen in reference to how a 1953 Marilyn Monroe movie could possibly influence one of today's up-and-coming country singers. "She was such a storyteller and that was such an opulent time of movie making, so it's that visual storytelling that was so incredible in those musical numbers."

However, Bannen wanted to put her own twist on the message behind the song. She felt that "Diamonds Are a Girl's Best Friend" isn't entirely relatable to the more "grounded" country music world.

Her M.O. for the song was to “play with something sparkly like that, but in a way that is a more country presentation.” She injected the song with flirty, playful lyrics about marriage (I.e. diamond rings) and the love behind it.

"Those influences are huge because I think ultimately those are great storytellers. Frank is one of the ultimate storytellers, just the way he interprets a lyric is just so special."

Of course, Bannen's album was influenced by some of her closest friends, not just A-list celebs.

Jaren Johnson of Cadillac Three, who Bannen calls "a truly fine songwriter," served as the album's main producer. Funny enough, Bannen and Johnson grew up in the same area at the same time, even attending high school together, though Bannen admits they didn't know each other then.

Although his songwriting isn't featured on the album, they have written together since then, such as Bannen's country radio single, "You Are What You Love."

"We've been at it for a long time together and we've come up in this town together," Bannen said. "So I've always loved Jaren and I love that he understands country, but he also isn't afraid of some really gritty, real sounds."

Bannen says that some songs sound "too pretty" and can come across as "not very relatable," but that's a problem that Johnson avoids as Bannen sees it.

"He brings a real textured edge to things, which I love."

"I think I knew I wanted to be a musician from a very young age inside, but I didn't know how to say it."

She also worked "a ton" with Grammy-nominee Will Bowen, whom Bannen calls "a close, close friend." Also a contributor to "Colors" Claire Douglas.

"She's making a major splash on the scene in Nashville," Bannen said. "She's the daughter of songwriting royalty Tom Douglas, but every bit just the truest form of a songwriter in her own right."

"I think I knew I wanted to be a musician from a very young age inside, but I didn't know how to say it," Bannen admitted. "Growing up in Nashville, you know, my babysitter, the guy mowing the lawn, the plumber, everybody is chasing a music dream and you see people go home."

"My mom would say I made up my first song at 18 months old based on the word of the day that was on 'Sesame Street,'" Bannen joked.

What's unique about her story, however, is that she didn't begin making music right away -- it wasn't until after college that she took her songwriting seriously.

"I'm kind of a late bloomer in that sense," she said. "(Some people) know what they want to do from a young age and they go for it at 18 and I think they're really brave for doing that.

Bannen was studying for the LSAT when she realized that "nothing made me feel the way music made me feel." She called her hidden desire to perform "uncomfortable," so, at 22, she dove into her music.

"When you start out, you emulate the people you love and then you have to become yourself," said Bannen of transitioning from the 20-year-old girl writing songs in her bedroom to the woman making her national television debut performing her song "Time Machine" on "TODAY."

"I think that would be the biggest difference for me now is knowing who you are, knowing what you do is different and hopefully special and really doubling down on that instead of trying to chase down something else," Bannen noted.

"I don't know if I'd say I'm successful, but I'm still alive and I'm still doing it."

"I was very tempted to chase what people told me success would be or what I thought people wanted, but I think the more I say 'no' to that and try and say 'yes' to what's true for me, I think that's connective. That's what people are looking for."

Of her status today, Bannen modestly said: "I don't know if I'd say I'm successful, but I'm still alive and I'm still doing it."