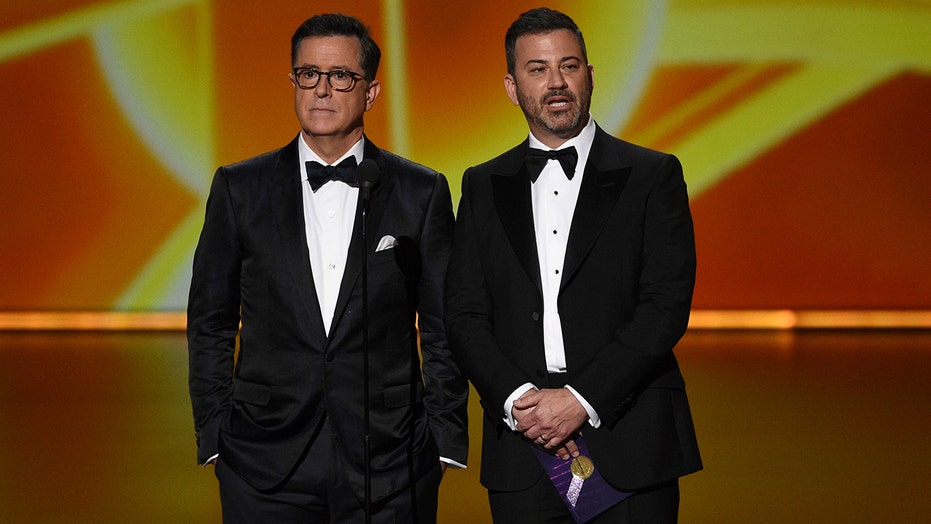 Former Emmy hosts Jimmy Kimmel and Stephen Colbert took the stage at the 71st Annual Emmy Awards to mock the Television Academy for its choice to go without a host in 2019.

The late-night duo took the stage together to present the award for outstanding lead actress in a comedy series to Phoebe Waller-Bridge of “Fleabag.” However, before they announced the winner, they took a moment to scold the organization for its choice to present the broadcast without a host.

“What a dumb idea” Kimmel added. “You know what has a host? Applebees has a host!”

Kimmel hosted the ceremony in 2012 and 2016 while Colbert hosted in 2017. However, after hosts Michael Che and Colin Jost headlined the Emmys in 2018, the Television Academy decided to push forward with the 2019 broadcast without a host.

“You know who the real victims are here?" Colbert asked. "It’s us. Hosting is the only thing we know how to do.”

Stephen Colbert, left, and Jimmy Kimmel present the award for outstanding lead actress in a comedy series at the 71st Primetime Emmy Awards on Sunday, Sept. 22, 2019, at the Microsoft Theater in Los Angeles. (Photo by Chris Pizzello/Invision/AP)

“You would have made a great host,” Colbert said.

“You would have been even better Stephen.”

The two late-night comics joked that without a host, no one would be around to feign interest in “Jason Bateman’s vacation stories.” The camera then cut to the "Ozark" star who pretended to be visibly upset by the jab.

The bit ended with Colbert suggesting that if they let the no-host thing slide, Amazon’s Alexa would soon be reading the nominations. With that, the familiar voice of Alexa read both the nominees and winners.

Waller-Bridge took home her second trophy of the night, which was the third overall for “Fleabag" at that point.