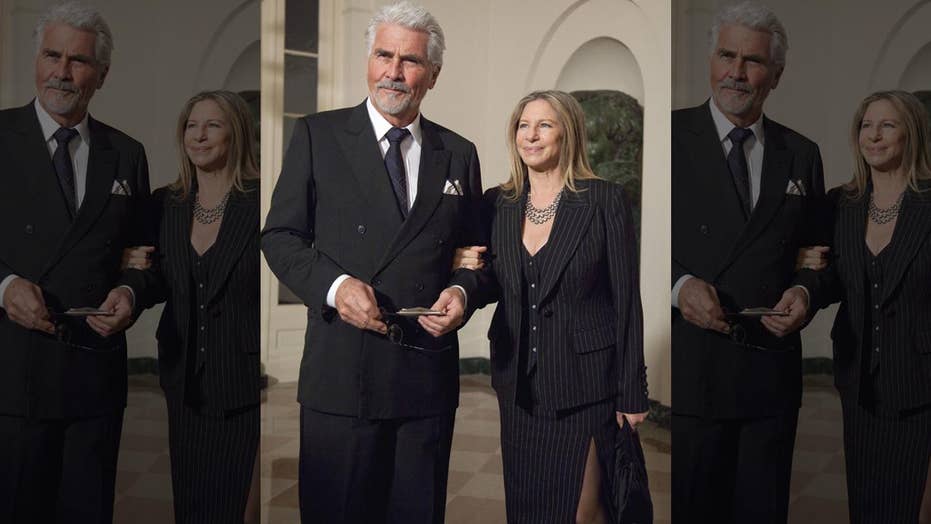 James Brolin thanks his lucky stars for his lasting relationship with Barbra Streisand. The stars tied the knot in 1998 and have successfully kept the spark alive, despite their hectic Hollywood careers.

James Brolin thanks his lucky stars for his lasting relationship with Barbra Streisand.

Brolin and Streisand tied the knot in 1998 and have successfully kept the spark alive, despite their hectic Hollywood careers.

“If you look at Cancer and Taurus – not that I’m into astrology, but I’ll click on that if I’m on the computer – almost every time, it says, ‘You guys are magic together,’” Brolin, 78, told Fox News. “‘You’re so opposite that you’re able to work it out.' And that’s what a makes a great team.”

“I think we’re both very opposite and very good negotiators,” chuckled Brolin. “She sees a color that’s one shade and I say, ‘No, it’s another color.’ And then we are able to negotiate around it.”

James Brolin and his singer-actress wife Barbra Streisand, 74, share a tender moment during the Hollywood Walk of Fame ceremony for Brolin. (Getty)

Brolin revealed that despite their busy schedules, which at times can keep them apart, they always find a way to come home to each other.

“We both long to come home to see each other and yet we both love to be in the mix of things at our age,” he explained. “We should be retired and on rocking chairs. But she is so intent on what she’s doing. As for me, I’m busy all the time. But we come home to each other. The evenings we’re always together. The days are just us running and holding our pants up.”

And Brolin has plenty of reasons to be thankful these days. He’s currently filming Season 4 of CBS’ hit sitcom “Life in Pieces.” He revealed it’s a relief to finally return to his comedic roots for television.

“I grew up in a real comedic family,” he shared. “It was constant joking. … I’m surprised no one has ever hired me for comedy because that’s what my private life has always been about… It’s a blessing to do this… Sharing this with a bunch of people who are kind of like family? It’s really just wonderful.”

However, the real surprise is that Brolin, who’s had a passion for filmmaking since he was 10, has gone on to lead a thriving career in front of cameras.

Despite his hesitations, fate was persistent.

“I was in a play in junior high school,” he recalled. “And I got so scared, I didn’t show up. I couldn’t even give book reports… People kept pushing me in front of the camera. And when I was 18, somebody stopped me and said, ‘Would you be interested in driving a Dodge pickup in a commercial?’ I did and suddenly, I’m in the actor’s union. Then an agent came to me… I was pretty shy about it all. Especially when I had to talk.

“Then I got an appointment at Fox Studio when I was 19 years old. And I was put under contract to do various jobs a week. I would dub other actors’ voices in movies. I would do walk-on parts. And they thought I may have a future. At that point, I was getting this money, way more money that I had been making parking cars on Restaurant Row.”

Brolin said he used his earnings to attend acting classes every night in hopes of improving his craft and boosting his self-esteem.

And there was also that major flub in front of James Stewart. Brolin made his motion picture debut in 1963’s “Take Her, She’s Mine” alongside the star and teen idol Sandra Dee. It was during his time on that set that Brolin realized he needed to hit the books if he wanted to survive.

“What excited me was just being in the same room with the man,” said Brolin on working alongside Stewart. “It was a real confidence booster. But there I was, with all this confidence and opportunity, and I couldn’t remember my lines in front of 100 people… I couldn’t remember anything… It really scared the heck out of me.

“That’s when I really buckled down and I started going to school, to workshop every night. I spent every single nickel on trying to educate myself and humiliate myself until it became status quo…. I just thought to myself, ‘I’m going to sit in this awful feeling and enjoy it.’ That went on for quite a few years.”

And while his son, fellow actor Josh Brolin, was wary of pursuing the family business, the famous patriarch gave him some no-nonsense advice.

“He had a chance of taking an acting class, metal shop or woodshop,” said Brolin about his son’s high school days. “He had to take one of these classes in his senior year. He asked me and I said, ‘What are you asking me for? I thought you hated the whole idea.’ You know what it was? It was the backlash from kids and gangs around the school that would say, ‘Oh, so your dad is like a bigshot?’ And they’d want to fight. It’s as if Stallone walks into a bar and somebody wants to pick a fight with him.”

“I said, ‘If you take an acting class, it’s better than a psychology class. It will apply immediately what you learn. You will put yourself in the other guy’s shoes, look back at yourself, and really see where the conflict lies.’ He didn’t say anything. And the next thing I knew, he was in the school play. … He soon started doing workshops every night. … Then he was in ‘Goonies’ with Spielberg.’ Now he’s booked for the next three years. Otherwise, he’d be making metal bowls.”

American actor James Brolin astride a motorcycle, as Dr. Steven Kiley in the US television drama "Marcus Welby, MD" 1969. (Getty)

Still, fans have wondered if Brolin would take on one other challenge. During the early days of his career, Brolin starred in the TV series “Marcus Welby, M.D.” from 1969 until 1976. With so many classic shows recently getting the reboot treatment in Hollywood, some have wondered if “Marcus” would join the bandwagon.

The series, which starred Robert Young as the leading role, explored how Doctor Marcus Welby and his young assistant (Brolin) try to treat patients as individuals in an age of specialized medicine and uncaring physicians.

Brolin isn’t opposed to the idea.

“My manager keeps mentioning it,” he explained. “There’s so much nostalgic stuff being reshot now, I don’t know why we couldn’t do something. But to have a sweet doctor that everybody loves? I don’t know if that will work today. But to have an old guy like me riding motorcycles and maybe even having some Hell’s Angels buddies that he rides with on the weekends? You can go in several directions with this… It’s a possibility. I need a walker. Then I’ll do it!”