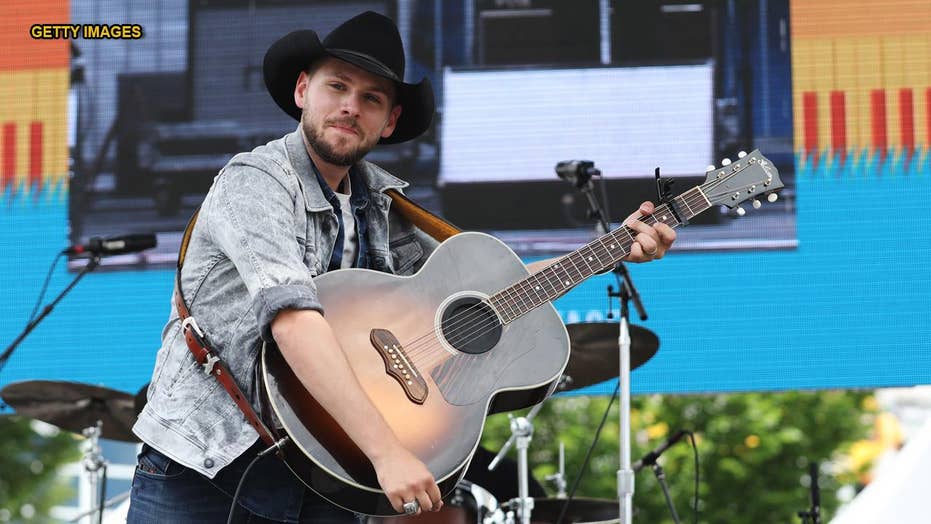 Canadian country star Brett Kissel and 'Bachelor' pals Kaitlyn Bristowe and Jason Tartick dish on coming together in the Bahamas for Kissel's music video, 'Drink About Me.'

LOS ANGELES – Brett Kissel has maintained a deep connection to country music since he was a young crooner living in Canada, barely learning to play the guitar at the behest of his parents, who urged him to formally learn the instrument and its nuances.

As a 6-year-old, Kissel wasn’t into learning about music theory and only wanted to learn the guitar by replaying what he had heard on the radio, though he admits it was an “unconventional way to be brought up in country music.”

Fast-forward to today. Kissel, now 29, has released a handful of albums and is gearing up to debut his newest record "Now or Never" in January. Not to mention, his music has earned him several accolades, including Canadian Country Music Association awards and JUNO awards.

Brett Kissel performs at the Chevy Breakout Stage on Day 3 of the CMA Music Festival on June 8, 2019, in Nashville, Tenn. (Photo by Leah Puttkammer/Getty Images)

However, one project he is super excited about is the music video for his latest single, “Drink About Me."

The Canadian cattle farmer, along with his close pals and one of Bachelor Nation’s favorite couples -- former "Bachelorette" Kaitlyn Bristowe and alum Jason Tartick -- recently sat down with Fox News to discuss the music video, which stars Bristowe and Tartick.

“I loved getting an opportunity to hang out with these guys in this incredible location and really take the friendship to the next level because we all had dinner together shortly before we went with my wife, Cecilia, and obviously Kaitlyn and Jason,” Kissel boasted about the cheeky couple.

"And talking about the video and how it was gonna be, we knew it was going to be fun. But I think once we left the Caribbean, we realized that was one of the most fun weekends I've ever had.”

Bristowe, 34, and Tartick, 31, likened the experience of filming in the Bahamas to being on “Bachelor in Paradise,” though it was only the two of them getting cozy together.

“Being in a music video was always on my bucket list. So I was like, 'Yes, I get to star in a music video with my friends and with my boyfriend,' so I don't even think you finished your sentence. I already had said yes. I was very excited,” Bristowe recalled of learning she had been tapped to star in the shoot.

She jokingly added: “It was a lot of bugs, a lot of sweating, a lot of making out and a lot of drinking."

Kissel also opened up about the keepsake he received from the legendary Johnny Cash when he was just a child before Cash died, which, Kissel said, cemented his devotion to the Man in Black forever.

“I always loved Johnny Cash," Kissel shared. "And when I was a kid, it's not that I had an upbringing that was sheltered in any way, but I didn't know as a 4-year-old, 5-year-old, 6-year-old, that music wasn't new and it was just music that we played. So Johnny Cash music was always in the house and especially something that my grandparents played.”

"Johnny Cash music was always in the house and especially something that my grandparents played."

Kissel said his grandparents had developed “an incredible record collection,” adding that when he first began playing the guitar, “I would actually sing in the same key as Johnny Cash, just one octave higher.”

“I sounded like a little girl, more like Dolly Parton, and he was Johnny Cash,” Kissel quipped as Bristowe and Tartick struggled to contain their laughter. “And his instrumentation was very easy to play – boom chicka boom, chicka boom, chicka boom – so that was easy for me also to play as a kid. So I loved his music.”

The “Cecilia” performer went on to describe how, when he was 12, he wrote Cash a letter of condolences when the legend’s second wife, June Carter, died in May 2003.

“I was so sad for him and I felt like I knew him, so I wrote him a letter from an address that I had in the back of my grandparents’ records,” Kissel recalled, adding that in the meantime, over the next months that followed, he created his first recording on cassette tape called “Keeping It Country."

The project was a collection of his favorite Cash records that spoke to the feelings Cash might have been experiencing in his bereavement.

“I wrote him the letter, put it in the mail and then I forgot about it and made this recording, a bunch of Johnny Cash songs, 'Tennessee Flat Top Box,' 'Big River,' 'I Guess Things Happen That Way,' I Still Miss Someone' – it was almost like a tribute record to him,” said Kissel.

Then, Kissel said on the day he received the priceless artifact from the famed Cash, he had been preparing for the largest show he had to date for his album’s debut.

“And then, it's Friday, Sept. 12, 2003, and I don't have to go to school this day because I've got this big release party that I have to prepare for,” he explained. “I'm already gonna dress up all in black because Johnny's my hero and play all of his songs. My mom woke me up in the morning and she said, 'I've got great news, but I've got sad news. The great news is your concert sold out.'”

Kissel put the significance of the feat into perspective.

"There was a big yellow envelope that I opened up with shaky handwriting and it said, 'To Brett, Jesus, first. Johnny Cash.'"

Then, Kissel’s mother fed him the shattering news that Johnny Cash had died that morning.

“I was devastated,” Kissel recollected. “But I went, you know – the show must go on – I got ready for my concert. My dad came home from work that day and [had] a stack of mail, and in that were letters and cards from grandparents or cousins who couldn't make the show, but wishing me well on my release-party day.

"And there was a big yellow envelope that I opened up with shaky handwriting and it said, 'To Brett, Jesus, first. Johnny Cash.' It was a picture he gave me, and I got that on the day that he died.”

Sept. 2, 1995. Johnny Cash performs during his segment of the Concert for the Rock and Roll Hall of Fame in Cleveland. (The Associated Press)

“But I feel that in everything that I've ever done in my life, that he has kind of had his hands on my shoulders. I've never met him, but I know I'll meet him one day.”

The heartwarming tale permeated the room, eliciting reactions of disbelief from Bristowe and Tartick. And in discussing his idol in Cash, Kissel couldn’t help but issue high praise to a current living legend, Garth Brooks, whom the “Love Them A Little” singer opened up for 16 shows while Brooks made his way through the Canadian leg of his tour.

In recounting the “euphoric” experience of blazing a stage with Garth Brooks, Kissel said he was as close to heaven as one could get in this lifetime.

“I'm trying to kind of relate it to like a Cloud 9 experience that I think we've all had,” Kissel began, drawing a parallel to Tartick’s infatuation with the Buffalo Bills. “I think about you, Jason – like if you got a chance to be at the center of the stadium and watch the Bills win the Super Bowl – like how euphoric that would be.”

“I believe that I know where Cloud 9 is. I know it exists and I've been there,” Kissel raved, unable to contain his excitement. “It's in the center of a stadium on a giant steel stage, standing shoulder-to-shoulder with Garth Brooks singing 'Friends in Low Places.' I've done it. I've been there. That's Cloud 9. People are like, 'I wonder when I'm going to experience it,' and it's like, 'Well, I know exactly where it is.' That's what it's like.”

Kissel said he has to place Brooks atop of the best, noting that he gives respect where it’s due largely in part of the staggering number of shows Brooks has sold out during his illustrious career.

“We had 55,000 people in, you know, in Regina, Saskatchewan, and the dates that we did across Canada,” explained Kissel. “I mean, he sold out nine shows in Edmonton at 20,000 tickets. So that's 180,000 tickets sold to come and watch the greatest entertainer that ever walked the face of the planet – and Garth Brooks."