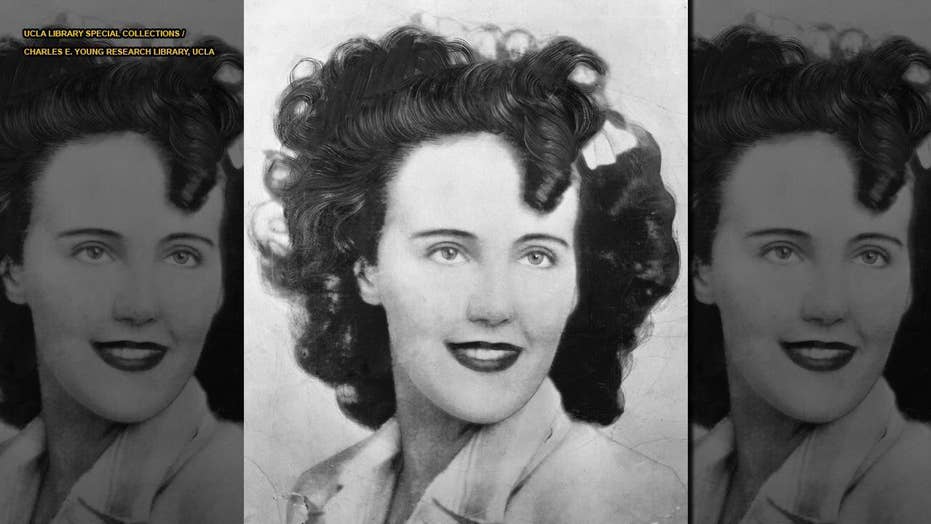 When Piu Eatwell suggested a theory for who killed the Black Dahlia decades after her horrific death, there was one person who agreed with her: the son of a police officer who worked the case.

Elizabeth Short showed up in Los Angeles in the 1940s with big dreams of becoming a movie star. However, the small-town girl would only achieve fame in death as the Black Dahlia. On Jan. 15, 1947, the 22-year-old’s naked corpse was found in a vacant lot. Short was scrubbed, cut in half and drained of blood.

The hopeful New Englander was viciously mutilated and a joker’s smile was carved on her face. Short’s rose tattoo was also carved out of her thigh, People magazine reported. The coroner determined Short died of hemorrhage and shock from a concussion and facial lacerations, Rolling Stone shared.

Studio headshot portrait of aspiring American actress and murder victim Elizabeth Short (1924 - 1947), circa 1940s. Short became known as the Black Dahlia after her body was discovered in a vacant lot in Hollywood, Calif., her corpse naked and severed in two. The murder still remains unsolved. (INTERNATIONAL NEWS PHOTO/Getty Images)

Short was nicknamed the "Black Dahlia” by the press after a 1946 film noir. Her killing continues to impact Hollywood years later.

In February of this year, Patty Jenkins, of “Wonder Woman” fame, co-created “I Am the Night,” a miniseries starring Chris Pine and India Eisley, the daughter of fellow actress Olivia Hussey, which takes a different look at Short’s demise.

In 2017, Eatwell released a book titled “Black Dahlia, Red Rose,” which attempted to shed light on Short’s brutal case based on legal documents, rare letters and grand jury testimony. The British attorney even tracked down some of the last living people with direct knowledge of the events at the time.

Eatwell’s theory? Leslie Duane Dillon, a one-time bellhop and former mortician’s assistant, was the monster behind the gruesome overkill.

“Her research was astonishing,” Buz Williams, a retired member of the Long Beach Police Department, told Fox News. “If I were a police chief, I’d hire her as a forensic researcher on cold cases because she really dug a lot of information that surprised even me. I thought her book was fantastic.”

Williams has a personal connection to the Black Dahlia. His father, Richard F. Williams, served on the LAPD’s "Gangster Squad," the team originally tasked to investigating Short’s murder. The patriarch was also a close friend of Con Keller, a fellow Gangster Squad officer who originally tailed Dillon as a suspect, Rolling Stone reported.

“My father and I would go fishing with a bunch of his friends from the LAPD when I was about 14,” Williams explained. “Every time they would have a drink or two, that case would always come up in conversation. But I had never heard of the Black Dahlia murder. It happened before I was born. But the case was very vivid in their minds and I heard about it a lot."

The former cops couldn’t get Dillion out of their minds either.

“Leslie Dillon had been writing letters to the police psychiatrist Dr. [Paul] De River with information that only the killer or someone who was present at the murder would know,” said Williams.

In the letters, Dillion described how Short was possibly murdered in a motel room.

In Eatwell’s research, she suggested Short was killed at the Aster Motel where Dillion reportedly stayed. The motel owners admitted to finding one of their cabins “covered in blood and fecal matter.” Witnessed also claimed they spotted a dark-haired woman whose features matched Short’s shortly before her disappearance.

Leslie Dillon ascends an ominously worded bus on his release, threatening to sue the city authorities for false imprisonment in 'at least six figures.' (Photo courtesy of the University of Southern California, on behalf of the USC Libraries Special Collections)

Dr. De River thought he could get Dillon, who left town after the murder, to confess.

“They finally talked [Dillon] into coming out to California,” Williams claimed. “And when he got to California, they had two adjoining rooms in a hotel. My dad told me he put a bug in one of the rooms because Dr. De River thought he could get Leslie Dillon to confess if he got him in the emotional state he was in when he murdered Elizabeth Short."

“So supposedly they got everything recording in the next room," Williams continued. "And when Leslie started getting more and more excited, it scared Dr. De River, who thought he was going to kill him. So he ran out. I guess Leslie was a scary guy.”

According to Rolling Stone, Short was possibly involved with members of a gang, one Dillion was associated with, that robbed hotels. One of the members would score a job as a night bellboy, find out where the safe was and then suddenly quit. A few days later, the group would return and rob the hotel safes of jewelry and cash.

“[The gang] wanted her dead because she knew about all these robberies,” Williams claimed. “[Elizabeth and Leslie] weren’t really in a relationship. Acquaintances? Probably.”

Williams said it was believed Dillion was possibly “hired or ordered by the other gang members” to commit the killing. Eatwell previously told Fox News she strongly felt Dillon was connected to Short’s grisly demise.

"There are very serious questions about Leslie Dillon that can’t be answered," she explained. "Her shoes and purse were found dumped in the trash can shortly after the murder by a local cafe owner. And that’s actually two blocks from where Leslie Dillon lived … The park where she was found is one he knew very well and in fact, used as a shortcut to get to where he lived.”

This photograph of Elizabeth Short and an unidentified man was most likely taken in a photo booth, circa 1940s. (Photo by Getty )

She went on to insist Dillon, an aspiring writer, allegedly preserved newspaper clippings about violence against women. Short’s friend Ann Toth and model Ardis Green reportedly identified Dillon as one of her boyfriends.

Newspaper clippings obtained by the FBI revealed Dillon was held as “suspect number one” after he contacted De River, offering “to help with a book on sadism” due to his interest in “psychopathic cases, such as the unsolved ‘Black Dahlia’ murder.”

Police said at the time the then-27-year-old knew "minute details of the slaying of Elizabeth Short, but denies killing or even knowing her.” In another clipping, police said Dillon “was familiar with details of the unsolved slaying that never were made public.”

“He was upset,” Williams explained. “The homicide detectives released Dillon from custody and said they didn’t have enough evidence. He felt that happened because those detectives were upset the Gangster Squad was supposedly disrespecting their investigation. So they let Dillion go. And he was very upset about that.”

In January of this year, Steve Hodel, a retired LAPD detective, told Fox News he believed his father, Dr. George Hodel, was the real killer. He once told People magazine his father dated Short at one point and was allegedly motivated by jealousy. Hodel has written several books about his findings.

“I read his book years ago,” said Williams. “I remember thinking he didn’t like his father very much and after finishing the book, I didn’t like his father very much either. But I just don’t believe the evidence is as compelling. Dillon’s letters, what the witnesses said during the investigation when they came forward — they all speak for themselves.”

Dr. George Hill Hodel was one of many suspects in the Black Dahlia murder case. (NY Daily News via Getty Images)

“I don’t think the Gangster Squad knew about him at all,” he added.

The Los Angeles Times reported in 1949 that Dillon was released by police due to a lack of evidence. Dillon later sued the LAPD for its treatment of him, Smithsonian reported.

He would go on to live a relatively quiet life until his death in 1988 at age 67. Smithsonian noted that in his lifetime, Dillon never confessed to the murder and was one of at least 20 suspects investigated by the LAPD.

In Eatwell’s book, she claimed Dillon had a child — a girl named Elizabeth.

“My father always felt he was a nutty guy,” said Williams. “He was definitely not the boy next door.”