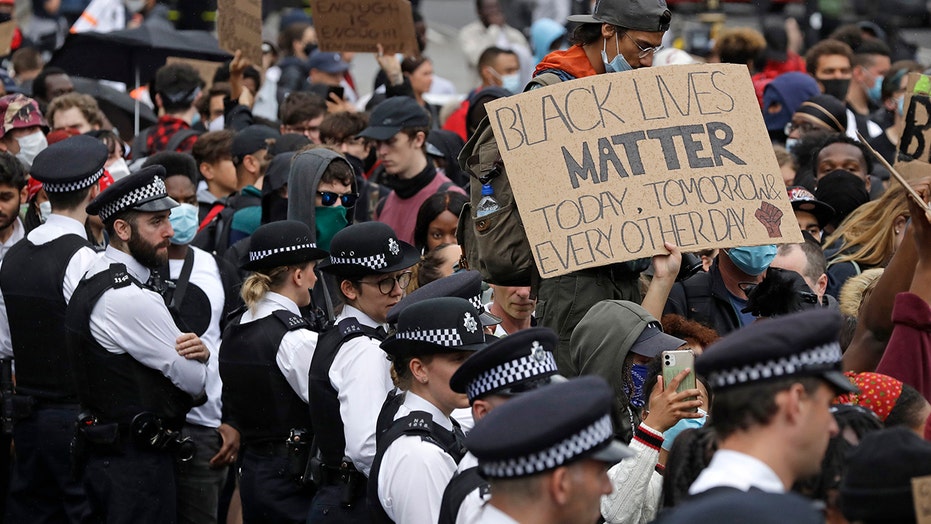 Greg Palkot reports from alongside the Black Lives Matter march in London with how world leaders are responding.

Banksy posted the new piece on Instagram, in which he highlights the portrait of a faceless black man and a candle. The full painting shows that the candle has set the American flag on fire, likely a reference to how Floyd’s death has sparked nationwide outrage.

Floyd was a black man who was unarmed when he died while in police custody in Minneapolis May 25 after an officer kneeled on his neck for almost nine minutes as Floyd complained that he couldn’t breathe. The incident has sparked peaceful protests against police brutality as well as rioting and looting in cities across the country.

The protests have spread across the globe, with tens of thousands gathering in the UK as well to voice anger at the treatment of police action and racism in Britain.

Nearly 2 million people had liked the photo as of  Saturday evening.

The comments were largely supportive, otherwise.

The original publication of this article included a note that flag burning is a federal crime: while Congress did pass a measure to ban flag burning in the '60s, the right to burn a flag is currently protected under the First Amendment.