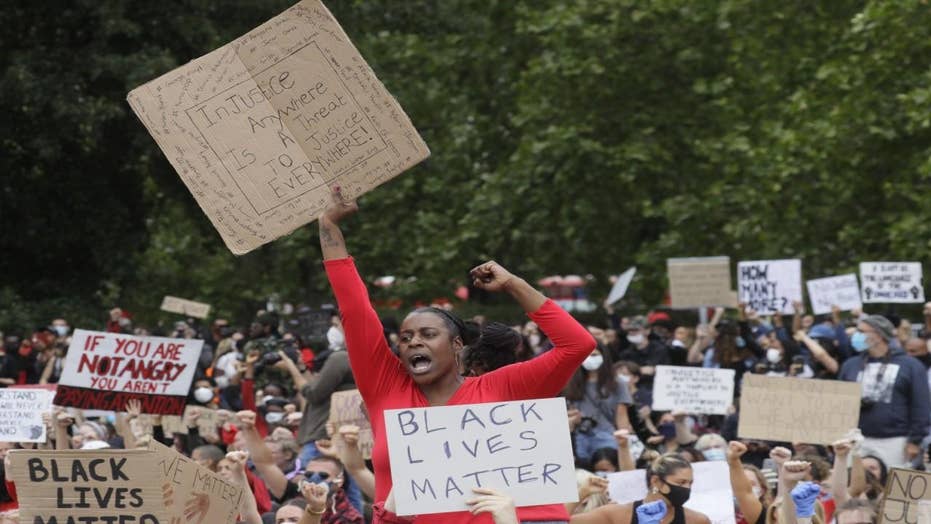 A statue of Britain's most renowned leader Winston Churchill has been vandalized in London as protesters turned out to speak against racism.

The vandalism came on the anniversary of D-Day when allied forces -- partially led by Churchill -- stormed the beaches of Normandy during World War II.

Footage online showed the bottom of the statue bearing neon green graffiti that read "ACAB," which stands for "all cops are b-------."

While it's unclear who the perpetrator was, many blamed the protesters and called out the police for not doing more to protect the statue. Police eventually surrounded the statue in an apparent attempt to protect it from further defacement in Parliament Square, where thousands of protesters had gathered, according to The Sun.

London's protests are part of a global uproar that occurred after the death of George Floyd, a Minneapolis man who died after an encounter with police. Officer Derek Chauvin, who has been arrested and charged with murder, could be seen on video kneeling on Floyd's neck for more than 8 minutes. On Saturday, Washington, D.C. is expected to see one of its largest demonstrations yet while long lines have formed outside of Floyd's memorial in North Carolina.

Some like television personality Piers Morgan criticized the vandalism, telling protesters it wasn't a good look.

"Memo to protestors in Westminster today: defacing Sir Winston Churchill's statue on the 76th anniversary of D-Day is not a good way to make your point," he tweeted.

Others criticized the police for not preventing the incident. Conservative commentator Darren Grimes tweeted: "The statue of Sir Winston Churchill, the man who guided our nation through its darkest hour, recognized as one of the greatest ever Britons, has been defaced. Where are the police?"

Some, however, seemed to excuse the vandalism by describing Churchill as a racist.

In the U.S., state and local officials have started removing Confederate monuments amid the anti-racism outrage.

Since his death while being detained by Minneapolis police last week, Floyd’s face has been painted on walls from Nairobi, Kenya to Idlib, Syria. His name has been inked on the shirts of professional soccer players and chanted by crowds from London to Cape Town to Tel Aviv to Sydney.