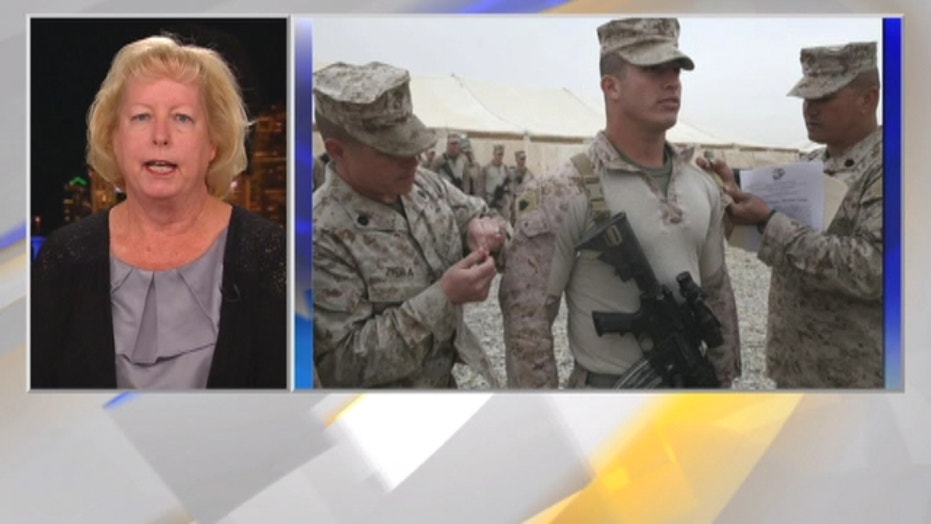 Jill Tahmooressi 'living in a nightmare'

Jill Tahmooressi says her son, Andrew, is being held in a Mexican prison on trumpted up gun charges.

The mother of a decorated U.S. Marine has been living through a self-described “nightmare” for over a month as her son has been chained to a cot in a Mexican prison after being arrested on gun charges at a border crossing.

Jill Tahmooressi’s son, Andrew, called her in the early morning hours of April 1 as Mexican officials surrounded his black Ford F-150 pick-up loaded with everything he owned – including three registered firearms – after the Marine made a wrong turn at the San Ysidro, California border crossing and ended up in Mexico. A day later, Jill received word that her 25-year old son was under arrest on gun charges and was being held indefinitely in La Mesa Prison in Tijuana.

“The nightmare is getting worse and worse,” Jill Tahmooressi told Fox News Latino of her son’s plight.

An active U.S. Marine reservist who served two combat tours in Afghanistan, including a 2010 stint in the violent Marjah district, Andrew Tahmooressi returned to the U.S. highly decorated – including earning a rare combat meritorious promotion to sergeant – but also emotionally and physically scarred from his war experience.

Tahmooressi suffered a severe concussion when an improvised explosive device (IED) upended his combat vehicle while in Afghanistan and he now suffers from what his mother, a nurse, calls directional dysfunctionality – frequently getting lost even in areas that he has driven in for years. The Marine reservist was also diagnosed with post-traumatic stress disorder (PTSD) on March 20, with his mother saying he suffered from bouts of depression and hyper-vigilance among other symptoms, and was moving to the San Diego area with a Marine friend to be close to his treatment center.

His mother, who lives in South Florida, and others close to Tahmooressi’s case say that his history of getting easily lost, paired with a lack of clear signage at the San Ysidro border crossing, led Tahmooressi to unwittingly enter Mexico.

“You’re a football field away from Mexico and you don’t even know it,” Jill Tahmooressi said. “It’s irresponsible that the U.S. government who protects our borders can’t provide good signage.”

During his first few days in La Mesa Prison, Tahmooressi told his mother that he was constantly being threatened by prison gang members while he was being held in the general populace section of the jail.

“He was in the general population, but when he called me it sounded like a riot was going on,” she said. “Gang hitmen told him he was going to be raped, tortured, killed and leave the prison in a body bag.”

These threats ostensibly led Tahmooressi to make an escape attempt by scaling a barb-wired fence. After being caught and having his wounds treated at Tijuana General Hospital following a self-inflicted stabbing, he was placed in the infirmary with his arms and legs restrained. Family and friends now worry that he could be transferred to a more high-security prison.

U.S. Sen. Bill Nelson of Florida has intervened on behalf of Tahmooressi’s family to try and get him released and, at the very least, have him transferred to a single cell. Bill Whitaker, the American Citizens Services chief at Tijuana’s U.S. consulate, said in a letter to Nelson’s office that the prison’s director approved Tahmooressi’s transfer to a single person cell on April 25, but he was still waiting on final approval for the move to go through.

“We’re talking about at least 27 days in restraints,” Olivia Hammer, the mother of another Marine who was jailed on gun charges in Mexico back in 2012, told FNL. “We don’t even do that in Guantanamo Bay.”

Hammar’s son, Jon, was imprisoned for four months in a prison near the Mexican border with Texas after he declared an antique firearm while trying to cross the border.

“In our case, Johnny disclosed that he had the gun and in Andrew’s he just wanted to turn around,” Hammar said. “This is not how gun runners behave. They want to get into a country and they don’t declare the guns.”

While Jill Tahmooressi is angry about the lack of proper signage that allowed her son to enter Mexico, she praised the State Department for helping her family out. Officials from the U.S. consulate in Tijuana have visited Tahmooressi about 10 times and have been in constant contact with his mother about the situation, she said.

One of Jill Tahmooressi’s main worries is the lack of progress that is taking place in Mexico to move her son’s case forward. Mexican officials plan to question the border guards that stopped Tahmooressi, but will carry out the questioning on May 28 – almost two months after the Marine was detained.

“The Consulate is taking all possible steps to assist the Tahmooressi family while working within the guidelines of the Mexican penal system,” Whitaker said in his letter to Sen. Nelson’s staff. “ In addition to visiting Mr. Tahmooressi, the Consulate has made several visits to the judge who will hear the case and is working closely with Mrs. Tahmooressi to gather medical records, affidavits and translations for court submission for Mr. Tahmooressi’ s hearing on May 28, 2014.”

Jill Tahmooressi, who spends most of her days worrying about her son, has also started a White House petition to have him freed. She said that after surviving one of the most violent periods of the war in Afghanistan, it is said that he is languishing in a Mexican jail.

“He was brave and survived,” Jill Tahmooressi said of her son’s time serving in Afghanistan. “But now we have him in a Mexican prison with no help or relief.”