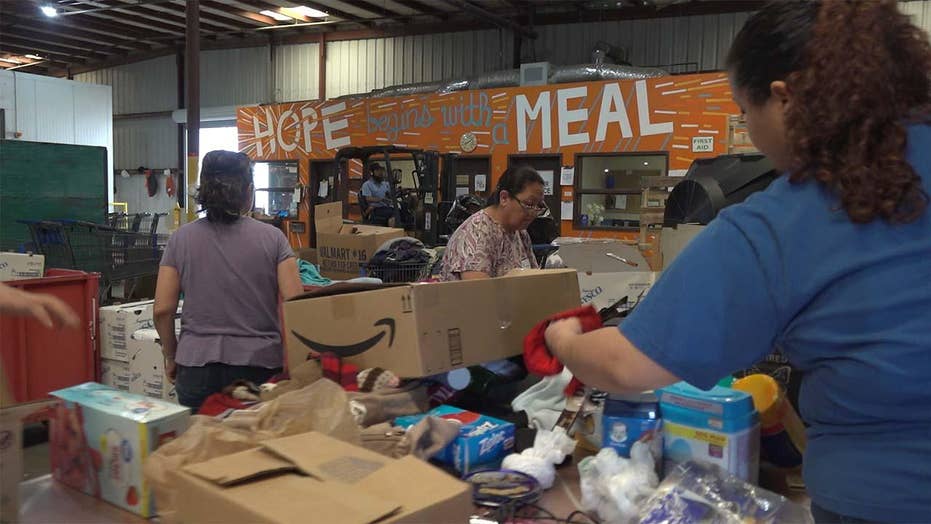 YUMA, Ariz. -- A rural border city in Arizona sees no end in sight to the surge of migrants and families crossing the border into their community.

Yuma mayor Douglas Nicholls issued a proclamation of emergency at the border in April, declaring a “humanitarian crisis” that is still affecting the community.

“This is a federal issue,” Nicholls said. “This is not a local issue. So, it needs a federal level response. We've had 2,500 people come through our shelter system. In a community of 100,000 people, that's a large number that comes through a shelter system in a little over a month (April – May 2019). So, with that number, that volume, it’s a national issue. It’s not just Yuma’s issue.”

It’s put a strain on the Yuma Food Bank, which has turned into a migrant donation center.

There were four volunteers at the Yuma Food Bank on Wednesday to sort through the donations for the migrants. (Fox News)

“Our primary mission is to get food out into the community,” Shara Whitehead, Yuma Food Bank president and CEO, said. “This other part of it is problematic for us…it has definitely added a different level of stress to us. This time of the year, we’re going into summer and that is a time when there is a higher level of unemployment. So, we have natural, reoccurring issues that occur at this time of the year that put more stress on our food bank to have enough food to be able to provide for those needs. Then you couple that with the humanitarian effort with the migrants and it has just become a very big burden.”

They’ve received around 90,000 pounds worth of clothing, food, hygiene and baby product donations the past two months but with few volunteers to help sort through it all.

“As a rural community we're looking to try to make sure that we meet all the needs of our community,” Whitehead said. “But, with this we don't know when this is stopping and it’s almost like it’s another mission statement. We're hoping that our congressmen can work through this so that it does have an end because it's hard for us. We can't keep this up.”

“This is a federal issue,” Nicholls said. “This is not a local issue. So, it needs a federal level response." (Fox News)

Maria Ramirez, her sister, niece and niece’s friend were the only volunteers on Wednesday to sort through the donations for the migrants.

“To me, it doesn’t matter who is getting the benefit," Ramirez said. “As long as it helps someone, that’s all that matters to me. If the community gets some help, too, or the migrants get the help, it doesn’t matter to me, they’re just people.”

“To me, it doesn’t matter who is getting the benefit," Ramirez said. “As long as it helps someone, that’s all that matters to me. If the community gets some help, too, or the migrants get the help, it doesn’t matter to me, they’re just people.” (Fox News)

But Whitehead said this has been “highly emotional” with families in the community they’re already serving, as she said they are a community of veterans that need additional resources that the “government can better provide for them.”

“Yes, it could be going to those in need in our community right now but we’re focusing on those that are passing through our community and we want to facilitate that to get them out of here," Whitehead said.

Terry Wood is an Air Force veteran who has lived in Yuma since 1956. Wood said the situation is getting to be a disaster.

Terry Wood is an Air Force veteran who’s lived in Yuma since 1956. Wood said the situation is getting to be a disaster. (Fox News)

“Naturally, they (the migrants) need some help,” Wood said. “There's no doubt about that. And so do some of the veterans. So, you've got to take one way or the other. I mean, you can't do (an) equal amount for each one. You've just got to figure out which one needs the most…there’s a lot of people that need help in Yuma and the migrants coming through, something has got to be done about it.”

And because the migrants are on-the-go, it adds to a different kind of issue for Whitehead, as the food they donate to them needs to be mobile, where migrants can eat it without having to cook if travelling to their destination.

Yuma Border Patrol agent Jose Gaibay said they need more manpower to deal with the “large influx”. Agent Gaibay said even though they do background checks, they don’t have criminal history in their country of origin so they rely on what the migrants are telling them. They have concerns with some migrants abusing the US immigration system—that they’ve found criminals bringing kids over, hoping to get released into the community.

Agent Gaibay said the problem is getting worse. Their detention centers are over capacity, so for the past month-and-a-half, migrants have been sent to a make-shift shelter at an old Salvation Army thrift store in Yuma. But, at a capacity of 200, they are now over-capacity.

"...The mission of the Salvation Army is to preach the gospel of Jesus Christ and meet human needs in His name without discrimination,” Salvation Army’s territorial commissioner of the USA western territory, Kenneth G. Hodder, said. (Fox News)

Salvation Army’s territorial commissioner of the USA western territory, Kenneth G. Hodder, said it's an honor to help. He also said that “at this point, we don’t know how long this will be" and that monetary donations will help them as they are being strained in paying for the cost of transportation for the migrants, food, and utilities and costs for operating the shelter.

“There are lots of issues associated with this crisis but for us, the most significant issue is the people who are involved,” Hodder said. “The ordinary individuals who are simply looking for help…the mission of the Salvation Army is to preach the gospel of Jesus Christ and meet human needs in His name without discrimination.”

Mayor Nicholls met with President Trump in DC last week and said Trump requested over $4 billion from Congress for humanitarian issues along the border a day after they met.

“The community responds in two different ways,” Nicholls said. “There's people that want to help. They want to make sure that the humanitarian needs of these people are taken care of. And so they volunteer, they provide resources. The other response is generally people that are concerned, usually not happy with the current immigration system. And so that aggression is understandable. But we look to channel that towards those that can make the decision—the people in Congress.”

That’s been a common theme from those in Yuma—that the nation’s eyes should be on this humanitarian crisis at the border—and that they need help from the government.

“The Democrats and the Republicans have got to come to a compromise but there just doesn't seem like they want to, especially the Democrats," Wood said. I don't know what can be done but something's got to be done, really. Because you got migrants down there, hundreds, thousands of them and somebody’s got to take care of them…the United States…Mexico doesn't seem like they care.”