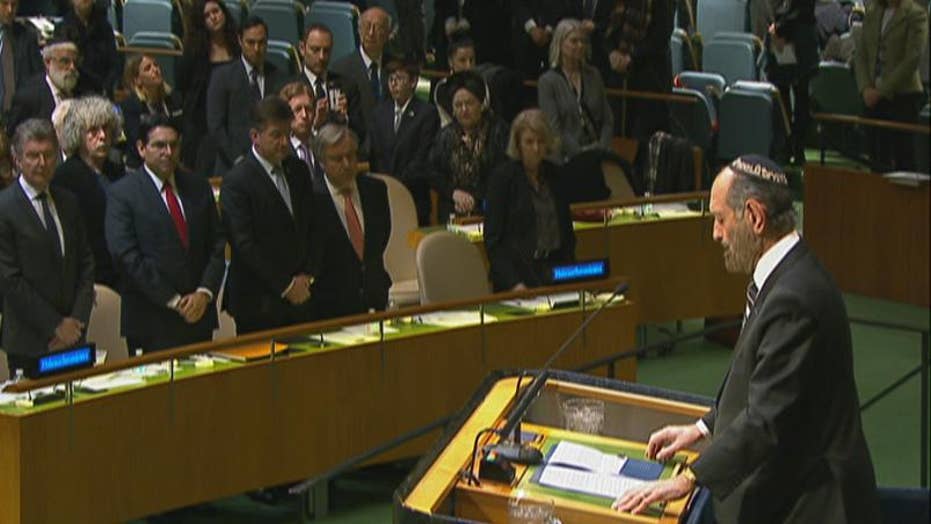 "I feel guilty that I survived," she told the United Nations on Wednesday, 74 years after she was spared the certain fate of death at Auschwitz.

"When I go with pupils to the camps in Poland, I imagine thousands of my brother Jews marching to their death. I wonder why God saved me?” Lavi said. “Perhaps he wanted me to do something big? Something big and I'm only an ordinary woman, with no special achievements, but now when I'm here talking to the United Nations, this is the big something that God planned for me."

Lavi is the youngest person saved by the legendary Schindler, who is credited with saving the lives of at least 1,200 Jews during the Holocaust. Now, at 81 years old, she stood proudly at the iconic General Assembly green and black marble podium to address the General Assembly's tribute to the victims and survivors of that dark period in human history

Eva Lavi is the youngest person saved by the legendary Schindler, who is credited with saving the lives of at least 1,200 Jews during the Holocaust. Now, at 81 years old, she stood proudly at the iconic General Assembly green and black marble podium to address the General Assembly's tribute to the victims and survivors of that dark period in human history. (UN PhotoEskinder Debebe)

"I don't know how they succeeded to put me on the list, but I was on the list" a grateful Eva told Fox News about Schindler's group of names that he saved.

She said Schindler told the Nazi guards that he needed Eva because, as a small child, she had small fingers that could fit inside the barrels of guns to clean them. The scene is depicted in Steven Spielberg's famous film, "Schindler's List." She credited Schindler for making up stories to save the lives of those who were spared.

"He lied, of course. He lied all the time, God bless him!" Lavi said, smiling. "My mother saved my life, no, first of all God, almighty God, second Mr. Schindler, then my mother. Her name was Felicia Ratz. Because of her I came here. Every time nothing happened to me, I knew that my life was saved."

Eva spoke to the U.N as it marked International Holocaust Remembrance Day, a solemn and emotional ceremony held in the soaring international chamber. Another Holocaust survivor, retired judge of the International Court of Justice, Thomas Buergenthal, also spoke. Like Eva, he also survived Auschwitz.

"It is our duty to remember, to mourn, to grieve, and to honor every single life that was taken so cruelly," declared U.S. Ambassador Kelley Currie, the representative for Economic and Social Affairs. "In commemorating the Holocaust, we must do our level best to take inspiration from them. In the words of Oskar Schindler, 'he who saves a single soul, saves the entire world.’"

She also had a blunt message for her fellow U.N. diplomats.

"Here at the United Nations, we use a lot of words. Many of them are forgotten as soon as they are uttered or read. They neither create hatred nor spur compassion – they just disappear into a void,” she said. “My hope is that today will remind us that our words – especially the words never again – can have power for good, but only if they are motivated by a recognition of our shared humanity and followed by action."

Eva now lives in Israel and at one time even served in the Israeli Defense Forces. She has two children and three grandchildren. Her presence was an inspiration.

Danon also criticized the rising anti-Semitism in the world, and the continual anti-Israeli bias that he says is too often displayed by the actions of some U.N. member states.

The usually stoic diplomats were moved close to tears as the U.N.'s staff Chamber Music Society played the theme song from the film, "Schindler's List."

The booming baritone voice of Cantor Joseph Malovany, of the Fifth Avenue Synagogue, also recited the names of the concentration and extermination camps where so many were sent to their deaths. U.N. Secretary General Antonio Guterres also spoke.

"She's a hero," Danon said about Lavi. "We are grateful that she could make the trip from Israel to the U.N., to tell her unique story. In a few years, unfortunately, we will not be able to bring the survivors to the U.N. to speak to the Ambassadors. That's why we have to cherish the memories, and document the stories of all the survivors."

Ben Evansky and Whitney Ksiazek contributed to this report.