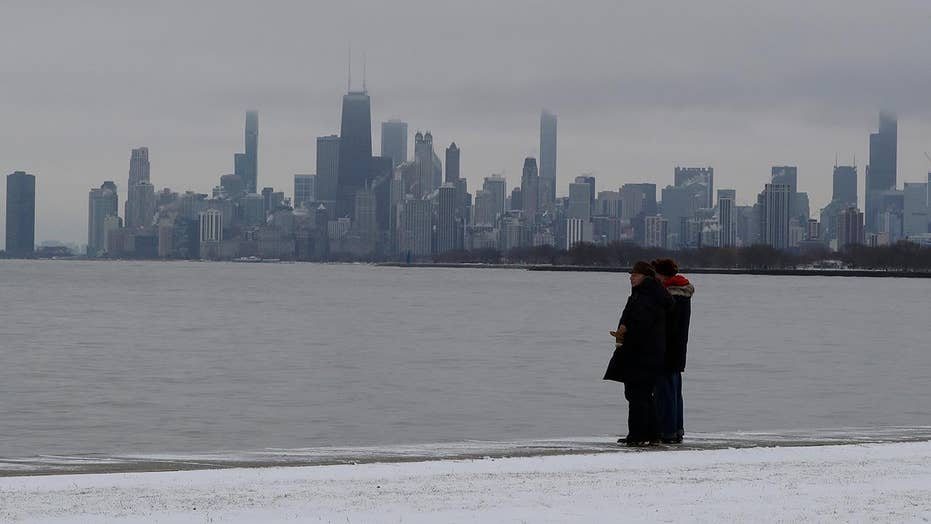 A fierce weather pattern in the Pacific Northwest led to slippery conditions Monday, causing a series of crashes involving dozens of cars on a Seattle-area bridge during rush hour.

According to the National Weather Service's Weather Prediction Center, moisture from the Pacific combined with Arctic air filtering south from Canada will mean "significant winter weather impacts" across the region.

"This is gonna be heavy snow across the Pacific Northwest for the next couple of days, maybe even running into the end of the week," said Fox News meteorologist Adam Klotz on "Fox & Friends."

Forecasters said up to several feet of snow can be expected for Washington, Ore., the northern Great Basin, and the central and northern Rockies going through Thursday.

Winter storm watches, warnings, and advisories have been posted across the region due to the series of storms. (Fox News)

"We've got winter storm watches and warnings across this entire area from central California running up across Oregon and Washington, and further inland as well," Klotz said Tuesday.

As the region is impacted by winter weather in the next few days, snow may accumulate in the Seattle and Portland metropolitan areas, which combined with cold air could create "treacherous and icy travel conditions," according to the WPC.

In the Seattle area, conditions already were dangerous during the evening rush hour Monday.

Around 30 vehicles were involved in a series of crashes on the westbound side of the State Route 520 floating bridge between Seattle and Bellevue. The Washington State Department of Transportation said 30 cars, including a bus, were part of chain-reaction crashes on the bridge around 6 p.m.

Trooper Rick Johnson with the Washington State Patrol said there were "slippery conditions" at the time.

A total of 30 cars were involved in a series of crashes on an icy bridge in the Seattle area during the Monday evening rush hour. (Washington State Patrol)

"Thankfully no major injuries! Drive safe tonight as the temps are below freezing," Johnson tweeted.

The bridge was closed for about four hours before reopening by 10 p.m. after transportation crews added more salt, Q13 News reported.

The region's first major winter storm of the season spawned widespread warnings about forceful winds, snow dumps and freezing temperatures. In Washington, U.S. Highway 2 was closed indefinitely near Gold Bar due to heavy snow accumulation and power lines, and trees falling over the road.

Semitrailer trucks that had been waiting at the U.S. 2 closure turn around Monday, Jan. 13, 2020, in Gold Bar, Wash. after the highway was closed indefinitely. (Olivia Vanni/The Herald via AP)

In Oregon, several feet of new snow in the area around Mt. Hood kept plow drivers busy as they worked to keep highways open. Plow driver Jeff Landaker told FOX12 that crews have been working 14-hour shifts since Friday when the storm hit, bringing white-out conditions and downing numerous trees.

Others who got stuck on area roads, such as semi-truck driver Curlin Roberson, said that chains on tires are definitely needed for anyone attempting to travel through mountain areas as the storm moves through.

"Word to the wise, just check the weather conditions before you start up; if there's a chain-up area make sure you chain," Roberson told FOX12.