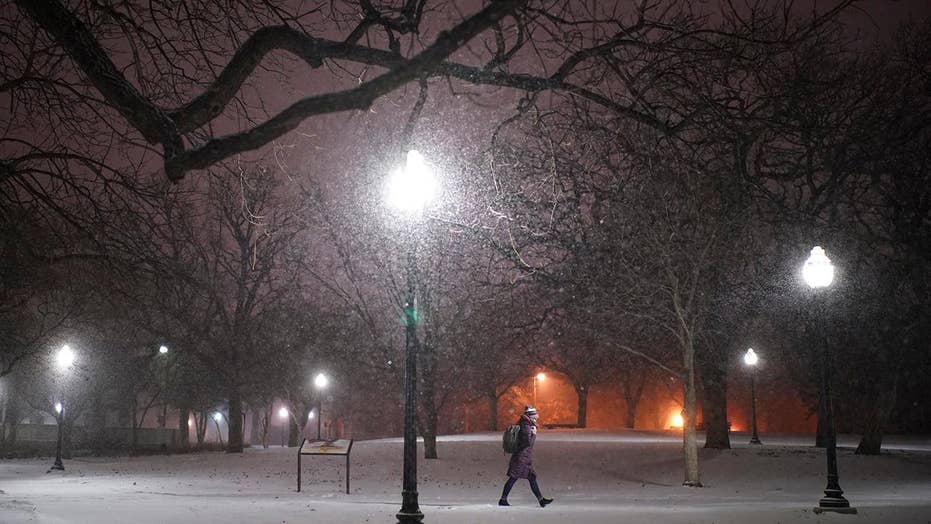 The Windy City and other areas in the upper Midwest are preparing for historic cold later this week, with some weather projections predicting around -45 to -60 wind chills.

When the polar vortex plunges into the U.S., it will be warmer in parts of the Arctic — Greenland, northern Canada and Alaska — than in Chicago and Minneapolis, meteorologists said. Cities such as Fargo, Minneapolis, Green Bay, Milwaukee, Chicago, and Detroit will all see the brunt of the brutally cold temperatures by Wednesday and Thursday.

The National Weather Service's Storm Prediction Center said Monday that a storm system is bringing heavy snow over the Great Lakes on Monday before ushering in bitter cold air into the region.

"Some of the coldest air in decades will pour in across the Northern Plains, Midwest and Great Lakes with windchills in the -40 to -50 degree range and air temperatures below zero for several days," Fox News Senior Meterologist Janice Dean said Monday. "This will be dangerous and potentially deadly for these regions, and people need to stay inside."

In Chicago, where temperatures dipped below zero over the weekend, city officials are encouraging residents to check on their neighbors during the bitter snap.

Mitsdarffer, who said the number of calls he's been handling this month have doubled compared to last year, said that simple tips can prevent homeowners from avoiding these problems.

"Try to run them during the day if you can. Do be aware that you are running water all night, so if you have a slow running drain, it's gonna back up on you. Secondly, open up all the cabinets underneath your sinks and faucets. Get as much warm air into all the areas that you can."

The cold weather has claimed 18 people in Cook County so far this winter, according to FOX32.

Chicagoans said Sunday even with the heater on, it still feels cold.

"We already did our grocery shopping, so I think we're kind of prepared for it to be really cold and for us to hibernate inside," Erin Antonik told the television station

The cold is coming from what is known as the polar vortex, which is a "large area of low pressure and cold air surrounding both of the Earth’s poles," according to the NWS.

“Record-breaking and potentially historic outbreak of cold still appears to be in the offing for the middle of next week,” according to the Chicago National Weather Service. “Greater than normal degree of forecast uncertainty in temperatures, due in large part to models showing all-time records being broken and in some cases shattered.”