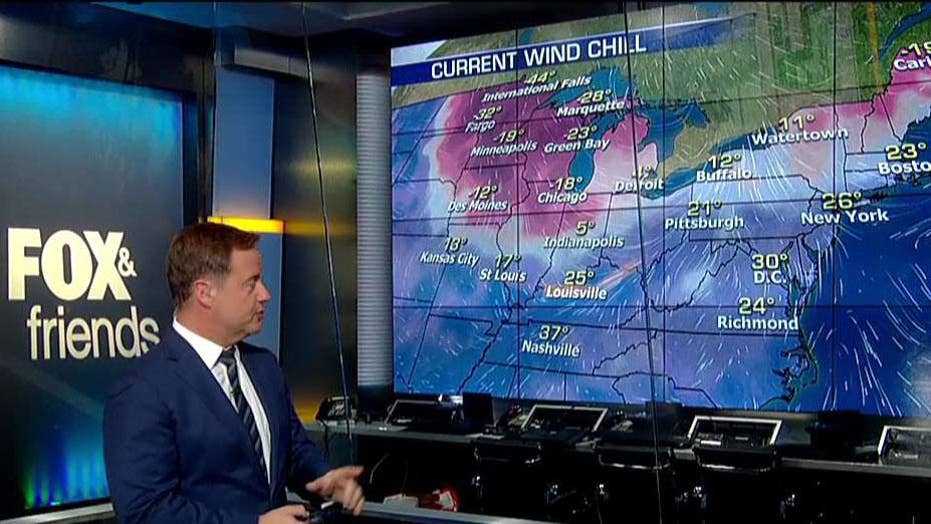 Wednesday is expected to be the coldest day of the week

A surge of arctic air is about to bring parts of the Midwest the coldest temperatures in years by the middle of this week, as part of the polar vortex is set to blast the region with dangerously cold temperatures.

The National Weather Service said in its forecast discussion that a "potentially record breaking push" of Arctic air will inundate the Northern Plains and Great Lakes by Wednesday, bringing wind chills as low as -40 degrees in many locations.

"There's no mild way of saying it. Brutal cold is coming," the NWS' Chicago office said on Twitter.

"While forecast specifics will be further refined, the frigid cold with wind will provide very low wind chills. It's forecast as the prolonged coldest in at least 5 years, but potentially much longer."

Cities such as Fargo, Minneapolis, Green Bay, Milwaukee, Chicago, and Detroit will all see the brunt of the brutally cold temperatures by Wednesday and Thursday.

The low temperatures forecast for Wednesday across the Midwest.

"The core of the cold will be in the Great Lakes, where numerous temperature records will be threatened," forecasters said.

Bitter cold temperatures are expected to remains in the region through Thursday.

The NWS Green Bay warned that wind chills may even approach -50 degrees on Wednesday and Thursday morning.

"Wind chills this low can produce frost on exposed skin within 10 minutes," the agency said.

The cold is coming from what is known as the polar vortex, which is a "large area of low pressure and cold air surrounding both of the Earth’s poles," according to the NWS.

"Many times during winter in the northern hemisphere, the polar vortex will expand, sending cold air southward with the jet stream," the NWS notes. "This occurs fairly regularly during wintertime and is often associated with large outbreaks of Arctic air in the United States."

POLAR VORTEX MAY BE ON THE HORIZON, SCIENTISTS WARN

Before the cold air arrives, a storm system is expected to bring snow across the Chicago area into Monday. Between 1 and 3 inches of snow is expected in parts of the area, according to the NWS.

"If travel is planned across the area this afternoon and evening, motorists should be prepared to encounter snow-covered roads, and slow travel conditions," the Chicago office said.

The NWS said that before the coldest air arrives, motorists should check their car batteries and tires before heading out on the road. Drivers should also plan on having jumper cables and pack a blanket before heading out.

Residents should also check their furnaces, chimneys, and carbon-monoxide detectors in addition to insulating exposed pipes.

Fox News Chief Meteorologist Rick Reichmuth said Sunday on "FOX & friends" that conditions in the Midwest will still be cold after the brutal core of cold air moves out.

"It will be there all week long, and then things get better next week," he said.

The cold air from the arctic blast over the Midwest is expected to eventually reach the Mid-Atlantic and Northeast by the end of the week, but temperatures are expected to moderate by that time.