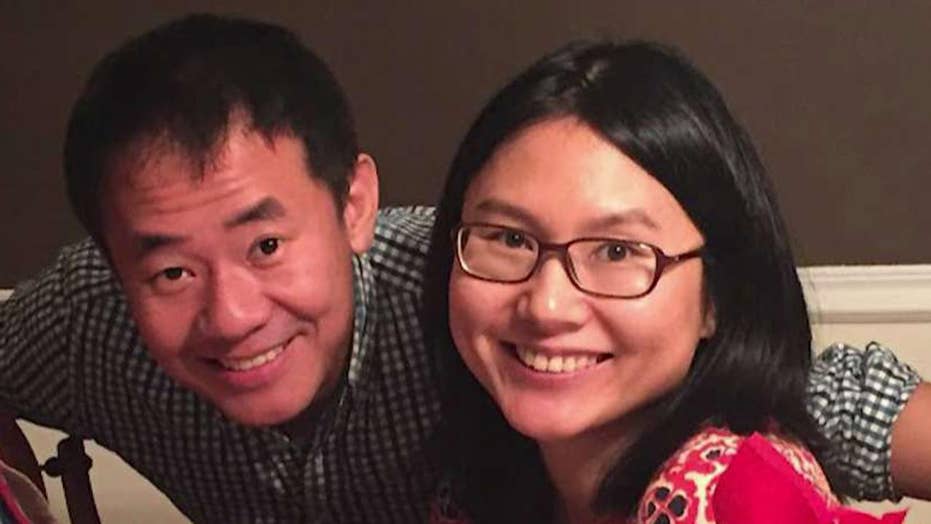 Wife of Princeton Ph.D. student held in Iran insists her husband is not a spy

Xiyue Wang is serving a 10-year term in Iran's notorious Evin prison and is one of at least four Americans now being in Iran; national security correspondent Jennifer Griffin reports.

Three years ago, American Ph.D. candidate Xiyue Wang left for what he thought would be a quick trip to Tehran to research 19th-century Central Asian politics, with his wife and 2-year-old son waiting behind at Princeton. Instead, he was arrested by Iranian police and became what many consider to be the latest pawn in the Islamic Republic’s decades-long history of American hostage-taking.

Wang is now one of at least four known Americans held prisoner in Iran, all accused of spying. Xiyue Wang’s wife spoke out on his conditions in a sit-down interview with Fox News – and rejected the regime’s allegations.

“He is not a spy,” Hua Qu said at her home in Princeton University faculty housing. “He's just a history nerd. All he wanted to do is to do good research and then teach for the rest of his life.”

Wang is now serving a 10-year term in Iran's notorious Evin prison, where White, too, is being held.

Hua Qu has been fighting for her husband’s freedom ever since his capture. Xiyue Wang left home in January 2016, the same month the Iran nuclear deal took effect.  Five other American prisoners were released by Tehran as part of the deal. But the cycle of American prisoner-taking swiftly resumed.

A 2009 handout photo shows Xiyue Wang at his apartment in Hong Kong, China.

For 20 days, Qu did not hear from her husband and feared the worst.

“I received a phone call and it was him crying to me that he was detained,” Qu said. “So it was that time that he first came out of solitary confinement and give me a phone call and he literally cannot say anything. He just cried at me.”

Asked how he described his conditions, she said: “He cannot even properly form a sentence. … His only crime is he's American.”

Jane Manners, who was in the same Princeton Ph. D. program with Wang and whose daughter attended the same preschool as his now 5-year-old son Shaofan, backed up his wife’s statements.

“He's not a spy. He is a man who was so deeply passionate about history. He was in the wrong place at the wrong time,” Manners told Fox News at Hua Qu’s home. “He was an American citizen in Iran right after Iran had released nearly all of its prisoners and they perhaps needed more as a bargaining chip.”

She described the impact on Wang's wife and son.

“[Shaofan] would look to the sky and see an airplane and say it’s daddy's airplane, and that it’s daddy coming back. It's hard on him. He's growing up without his dad,” she said. “He's not sure where his dad is, or when his dad is coming back.”

Her son now lives in fear that his mother could also be taken away.

Three years later, Wang's shoes wait by the front door as his family awaits his return.

WIFE OF DETAINED US CITIZEN IN IRAN PLEADS WITH TRUMP: 'MAKE OUR FAMILY WHOLE AGAIN'

“This is all politics,” Qu said.  “My husband didn't do anything wrong. He's detained only because he is American.”

“The United Nations Working Group on Arbitrary Detention has now concluded that the Government of Iran has no legal basis for the arrest and detention of Princeton University graduate student Xiyue Wang,” said Nauert. “The UN further notes that Iran committed multiple violations of his right to a fair trial and that his deprivation of liberty is arbitrary and that he should be released immediately.”

“Any charges of espionage against Mr. Wang are groundless. He is a student at a private university and has no associations with any government. No evidence has appeared suggesting Mr. Wang was in Iran for any purpose except researching the diplomacy of the Qajar Dynasty,” Norton wrote, reminding the supreme leader that Iran is a signatory to the International Covenant on Civil and Political Rights.

Wang Letter Sept 2018 by on Scribd

Last week, meanwhile, Iran confirmed it has been holding White, a 13-year Navy veteran from Imperial Beach, Calif., for the past six months. White joins Siamak Namazi, his father Baquer, and Wang as the four known Americans currently held in Iran. A fifth American, Robert Levinson has been missing in Iran since 2007.

Secretary of State Mike Pompeo was asked on CBS News’s “Face the Nation” Sunday about White and the plight of other Americans taken hostage by Iran.

“The American people should know we take the security of every American, wherever they are traveling in the world, as one of our foremost priorities. We will continue to work to get each of them back,” Pompeo said.

“These are a group of people who are among the worst terrorists in the world and who have the least respect for human rights in the world.”