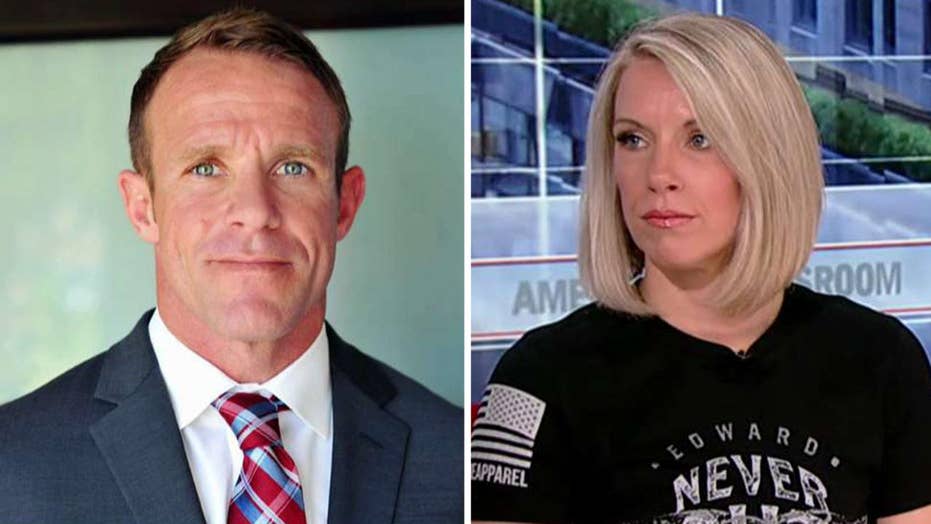 Wife of detained Navy SEAL Eddie Gallagher makes plea to President Trump: 'You're being lied to'

The wife of the decorated Navy SEAL accused of committing war crimes told Fox News on Friday that she wants to “let the president know he is being lied to” about the way her husband is being treated ahead of his trial.

Andrea Gallagher’s plea to the White House comes as the legal team representing her husband Edward filed a court motion this week seeking to remove the “unnecessary and punitive restrictions” they say have been placed upon him by his commander at the San Diego facility where he currently is being held. Trump, in late March, tweeted that Gallagher would be relocated to “less restrictive confinement” ahead of his May 28 court date – but the SEAL’s attorneys have disputed the Navy’s handling of that move.

“It’s an absolute nightmare. And I just want to let the president know he’s being lied to,” Andrea Gallagher said on ‘America’s Newsroom’. “There is corruption from the top down involved in this and we’re looking to expose it.

“In the meantime, I’m suffering,” she added. “This case – legal fees alone – will be close to half a million dollars. What military family can afford that?”

Navy SEAL Eddie Gallagher has gotten the chance to see his family following his relocation from a Navy brig in California, but a court fight is now unfolding over the living conditions he currently faces. (Courtesy Gallagher Family)

GALLAGHER’S COMMANDER DEFYING TRUMP’S ORDERS, TRYING TO SEND HIM ‘BACK TO THE BRIG’, LAWYERS ALLEGE

Special Operations Chief Gallagher, 39, is facing premeditated murder and aggravated assault charges stemming from the alleged killing of a wounded ISIS prisoner and alleged instances of him intentionally firing sniper rounds at civilians in Iraq.

Gallagher was moved out of the brig at the U.S. Marine Corps Air Station in Miramar, Calif., following Trump’s announcement on Twitter. Now Gallagher’s lawyers, in documents obtained and reported on by Fox News earlier this week, allege that his commander has placed a myriad of restrictions on the warfighter, ranging from the clothes he is allowed to wear to the times he can call his wife and children in Florida. They suspect the terms have been put in to place in hopes to entrap Gallagher and get him “remanded back to the brig.”

“We have been tortured endlessly, shamed, embarrassed. Slandered. Enough is enough,” Andrea Gallagher told ‘America’s Newsroom’. “The president said to unleash my husband. They have actually put him on a restriction that is tantamount to confinement. We need the president to take a good, hard look.”

A spokesperson for Naval Special Warfare Command told Fox News on Wednesday that the "President directed the Navy to move Chief Petty Officer Gallagher to a less restrictive confinement" and that the "Navy followed that direction.

"Chief Gallagher is now in a barracks environment, similar to a hotel room. In accordance with the Rules for Court Martial, Capt Rosenbloom is within his authority to place Chief Gallagher in a restricted status," Cmdr. Tamara Lawrence said in an e-mail. "Stipulations outlined for restricted Sailors are determined on a case by case basis.

"The allegations brought forth are serious and the military judicial process must be allowed to play out," she added.

Tyler Merritt, a retired Army captain and CEO of Nine Line Apparel, told Fox News on Friday that his clothing company has raised $80,000 over the past two weeks for the defense of Eddie Gallagher through sales of T-shirts advocating for his release.

“What it boils down to is the presumption of guilt before innocence. As a commander you have the right to pre-trial confinement,” he told ‘America’s Newsroom’. “But if I get an order from the president of the United States to release this man from prison and I decide to take it upon myself to create these pre-trial confinement conditions that are commensurate with being in prison, that is a big slap in the face to the president of the United States and I know he is being fed false information.”