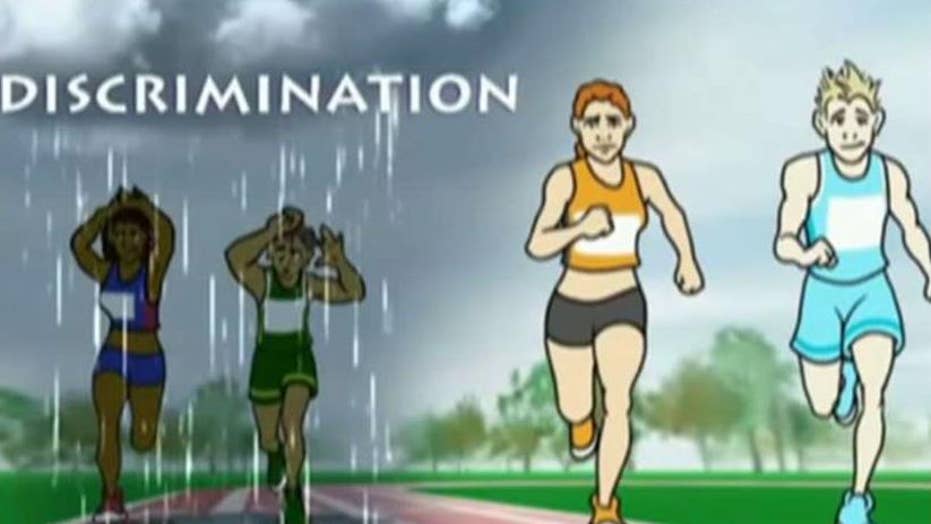 Was this a good lesson for students?

An animated film designed as a lesson in “racial discourse” for students at a Virginia high school will not be shown after it made students uncomfortable and drew criticism from parents who called it “white guilt.”

The video was shown at Glen Allen High School in Henrico during two assemblies for Black History Month and depicts several runners on a track, with black runners facing insurmountable obstacles while white runners are unimpeded.

Officials said in a statement Tuesday that the video, “The Unequal Opportunity Race,” was a presentation involving “American history and racial discourse.” They added, “A segment of the video was one component of a thoughtful discussion in which all viewpoints were encouraged. As always, we are welcoming of feedback from students and their families, and we address concerns directly as they come forward.”

Henrico County Superintendent Patrick C. Kinlaw acknowledged Wednesday that the video may not have been the best way to deliver a lesson in “racial discourse.”

"While we as educators do not object to difficult and constructive conversations about American history and racial discourse past and present, we understand why many people feel this video in particular was not the best way to deliver such an important lesson," Kinlsaw said in the statement.

Don Blake, whose daughter attended the assembly where the video was shown, said Wednesday that someone should be held accountable for the way the video was presented.

“They are sitting there watching a video that is dividing them up from a racial standpoint. It’s a white guilt kind of video,” Blake told WWBT.

Luke Harris, co-founder of the African-American Policy Forum, which created the video, told The Washington Post that the video was produced for "elementary and secondary schools or in college studies courses."

"We found that the video has a huge impact on the people that we're showing it to," said Harris, who is also an associate professor of political science at Vassar College. "Most of us know very little about the social history of the United States and its contemporary impact. It was designed as a tool to throw light on American history."

Administrators across the district have been instructed not to use the video, said school board chairwoman Michelle Ogburn in a statement. She apologized to those who were offended.

"In addition, steps are being taken to prevent the use of racially divisive materials in the future," Ogburn said.

The video comes four months after a student mistakenly played a song over the public address system before a football game that was a racist parody of the "DuckTales" theme song.