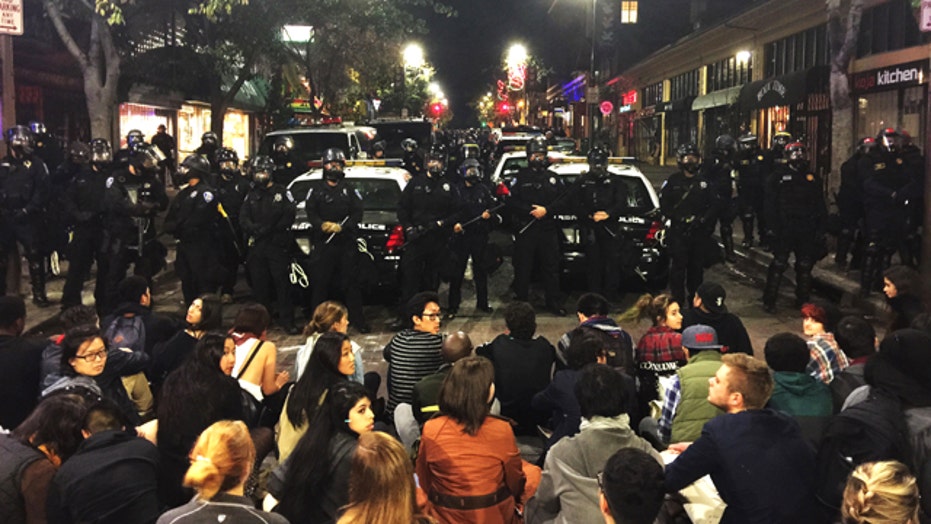 Community cleans up after demonstrations

A protest against police-involved killings spun out of control for the second straight night in Berkeley, Calif., Sunday, as demonstrators threw rocks and explosives at officers, turned on each other, and shut down a highway.

Sunday's protest began peacefully on the University of California, Berkeley campus. But as protesters marched through downtown Berkeley toward the neighboring city of Oakland, someone smashed the window of a Radio Shack. When a protester tried to stop the vandalism, he was hit with a hammer, Berkeley Police Officer Jennifer Coats said. Coats told KTVU that the man was taken to a hospital with non-life-threatening injuries.

Sunday's demonstrations began with approximately 50 protesters, but soon swelled to at least 500 people, according to estimates by police and protesters alike. Demonstrator Alessandro Tiberio told KTVU that the crowd had "very positive energy" when the march started.

"I'm an ally," Tiberio said. "It's important to stay focused on the fact that black lives matter. It's not that all lives don't matter but I'm here to support especially the black people who are most often the ones victimized by the police."

The demonstrations were the latest of several in the Bay Area — including in Oakland where activism is strong — to protest recent grand jury decisions in Missouri and New York not to indict while police officers in the deaths of two black men.

Police said groups of protesters late Sunday began roaming through the downtown area, throwing trash cans into streets and lighting garbage on fire, smashing windows on buildings, and damaging and looting businesses. There also were reports of vandalism at City Hall.

Some of the protesters made their way to State Highway 24 in Oakland and blocked traffic. The California Highway Patrol said some tried to light a patrol vehicle on fire and threw rocks, bottles and an explosive at officers. There was no immediate word of how potent the explosives were. Highway patrol officers responded with tear gas and chased protesters off the roadway. KTVU cited additional reports of CHP and police patrol cars being vandalized with windows smashed.

Coats said in a statement that there was "significant damage" to several Berkeley businesses and that many had windows smashed and several stores were looted.

The San Francisco Chronicle said that at about midnight, there were still a few hundred people on the streets. At one point, the Radio Shack on Shattuck at Dwight Way was ransacked. Later, a Whole Foods store on Telegraph was looted, with people taking and passing around bottles of champagne.

The demonstrations had concluded by about 3:30 a.m., according to Coats.

On Saturday night in Berkeley, three officers and a technician were hurt and six people were arrested when a similar protest turned unruly. The most serious injury was a dislocated shoulder, Berkeley police said. Coats said no police officers were hurt Sunday evening.