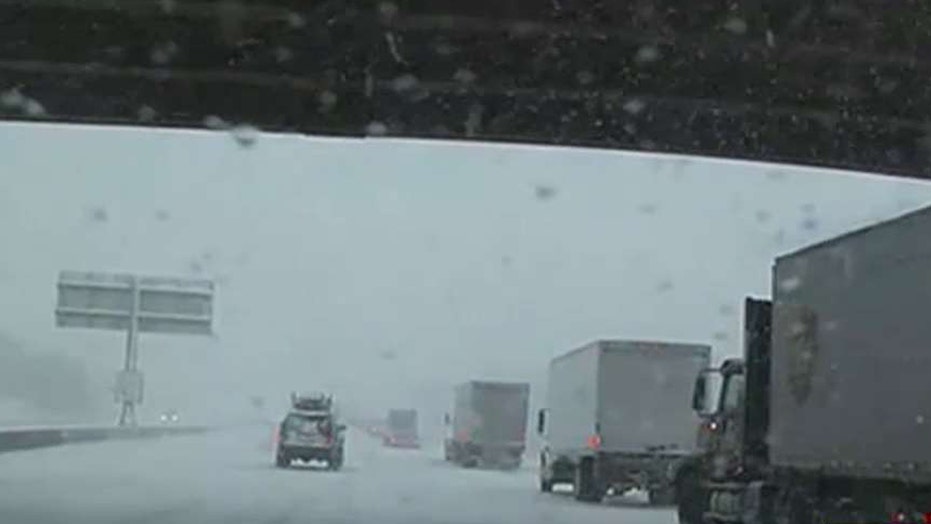 A powerful winter storm dumped heavy snow in Northwest Kansas late Tuesday night, hitting the area with up to 20 inches.

The National Weather Service said the heaviest snowfall was from Atwood to Colby, where about 20 inches of snow was recorded early Wednesday. Heavy snowfall was also reported in Sharon Springs, which got about a foot of snow, and Goodland, which recorded about 7 inches of snow.

The Kansas Department of Transportation said a section of U.S. Highway 36 west of Atwood was closed because of the weather. U.S. Interstate 70 in western Kansas reopened earlier Wednesday after being closed Tuesday during the storm.

The Thomas County Sheriff's Department says there have been several reports of cars sliding off roads, but no injuries have been reported.

As the system pushed east, the National Weather Service issued a tornado watch for parts of Texas, including Houston, and a large swath of Arkansas, where heavy rain had led to standing water in Little Rock and winds caused property damage in the southwest part of the state. Tornado watches also are in effect for most of Louisiana and western Mississippi through the evening hours.

On Monday, a least five tornadoes touched down in the Texas Panhandle, including one that hit a Halliburton district office near Pampa. The company says it was recently closed and no chemicals or workers were there at the time. Two deputies from the Gray County Sheriff's Office were exposed to natural gas while checking the storm-damaged property, which was later deemed safe, the sheriff's office said in a statement.

The storm that originated in the Gulf of Alaska could be a harbinger of El Nino, the ocean-warming phenomenon that's predicted to bring heavy rain to the West in the coming months, said Kathy Hoxsie of the National Weather Service.

"It's the beginning of the winter season," she said. "We want storms. We want rain. We've been projecting that we're going to have a wet winter and this is a sign that it's going to happen."

California in particular is anxiously awaiting winter rains as it seeks relief from its record, four-year drought. Heavy rain will help, but isn't expected to erase the deficit. Forecasters canceled high wind warnings in Southern California on Tuesday morning, but not before downed trees blocked roads overnight and thousands of customers in Los Angeles County lost power.