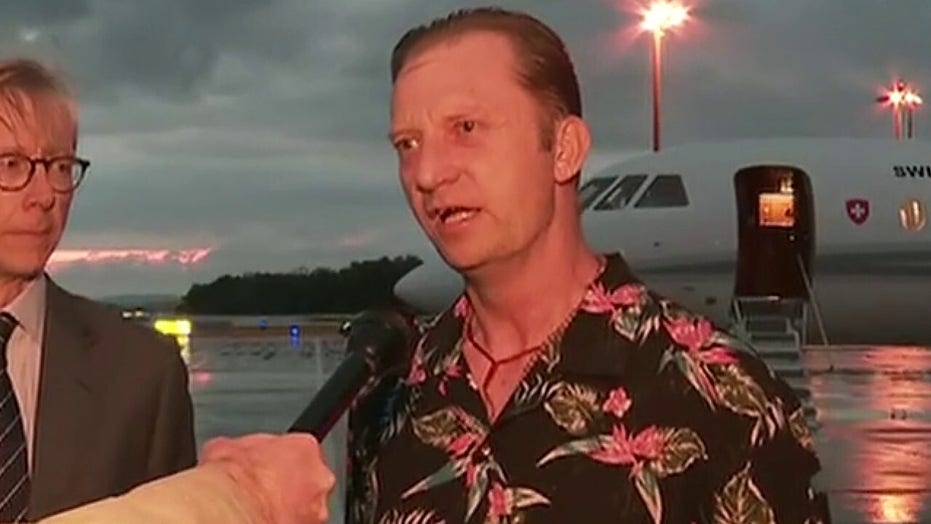 Michael White expresses gratitude after his release; Jennifer Griffin reports from the Pentagon on the deal that brought him home.

The thousands of veterans who claim that their exposure to burn pits during the wars in Iraq and Afghanistan left them sick may be closer to getting assistance from the Veterans Administration due to the legacy of a recently deceased soldier.

On Monday, the SFC Heath Robinson Transparency Act (H.R. 7072) was presented on Capitol Hill as an addendum to the previous legislation under the Burn Pits Accountability Act that was a part of the National Defense Act signed into law by President Trump back in December.

The new provision, which was presented by representatives Tulsi Gabbard, D-Hawaii, and Brian Mast, R-Fla., is a new non-partisan initiative that aims to hold the VA accountable when collecting data on burn pit exposure.

CORONAVIRUS CAUSE FOR CONCERN AMONG BURN PIT VETERANS

"There are clear patterns between exposure and these rare cancers or respiratory illnesses. But the answer that we always get back from both the DOD and the VA is [that] the evidence isn't there. The data isn't there. The research doesn't yet show that this correlation exists." Rep. Gabbard tells Fox News. "The aim of these bills together is to lay that foundation to prevent what is the hardship that our Vietnam veterans faced with Agent Orange."

Gabbard has pushed for approval of the Burn Pits Accountability Act which would ensure the evaluation of the exposure of U.S. service members to open burn pits and toxic airborne chemicals. (gabbard.house.gov)

The Heath Robinson Act aims to improve data tracking and accountability in how it is collected to better identify and determine the link between burn pit exposure, and reported chronic illnesses like respiratory ailments and rare cancers.

Under this new bill, the secretary of Veteran Affairs will be required to document every veteran who may have been exposed to burn pits while on duty and present findings to Congress every quarter. A biannual report will identify how many veterans have complained about burn pit exposure, made disability claims and the resulting outcomes. The report must also include a comprehensive list of conditions burn pit exposed veterans have.

"This has not been a focus of either agency or department, and there does not seem to have been any kind of real effort made towards recognizing that this is a serious problem, that both the DOD and the VA don't seem to even have a handle on how big it is."

A registry was created by the Veterans Administration in 2011, but signing it does not guarantee assistance. Many veterans are unaware that the registry exists.

Gabbard said that the bill will aim to combat what appeared to be a reluctance from the VA and the Department of Defense from collecting this data.

"This has not been a focus of either agency or department, and there does not seem to have been any kind of real effort made towards recognizing that this is a serious problem, that both the DOD and the VA don't seem to even have a handle on how big it is," Gabbard said. "I can only guess that the resistance comes from being afraid of what the cost may be to actually provide the care and the benefits to each of these service members who's been impacted."

Service members and their families concerned with the effects of burn pit exposure say they struggle to keep up with the high cost of medical treatments. There are more than 180,000 names signed to the VA registry, but it is estimated that 3.5 million veterans have been exposed to burn pits.

The Investigative Unit at Fox News has reported extensively on veterans made sick from their exposure to burn pits. Many service members said the pits were a crude method of incineration in which every piece of waste was burned, including plastics, batteries, appliances, medicine, dead animals and even human waste. The items were often set ablaze using jet fuel as the accelerant.

The pits were used to burn more than 1,000 different chemical compounds day and night. Most service members breathed in toxic fumes with no protection.

One of those service members who was made sick from exposure was SFC Heath Robinson, who succumbed to a rare form of cancer this past May and is the namesake of the new bill. Robinson is believed to have contracted a rare autoimmune disorder called mucus membrane pemphigoid after he was exposed to burn pits during a 13-month tour with the Ohio National Guard. While he received assistance due to the fact he was still serving in the military, he and his family have been long-time advocates for other veterans.

Heath Robinson (left) developed a rare form of cancer after he was exposed to burn pits during a 13-month tour of duty in Iraq. (Courtesy of Susan Zeier)

"He never blamed the military. You sign up as a soldier and you know you're going to go to war and there's going to be a chance of you getting shot or blown up and that you have that risk. But honestly, you just don't think about things like exposure," Robinson's wife, Danielle, told Fox News. She added that Heath felt it was important to go public with his story to help his fellow veterans.

"He never once blamed any of his higher-ups for giving him that duty," Robinson said. "His main focus was to get legislation passed and to start speaking out and telling our stories so that they shut down any remaining burn pits so that other young soldiers are not being exposed to it."

Danielle Robinson's mother, Susan Zeier, became an advocate and lobbyist after Robinson was diagnosed in 2017. Along with the advocacy group, Burn Pits 360, Zeier was a major factor in getting the Robinson Act introduced on Capitol Hill.

"Heath wasn't, but so many of them were being denied benefits by the V.A. and being told their symptoms are psychosomatic and that," Zeier tells Fox News. "I just got so angry I couldn't believe our country would just turn a blind eye to all these war heroes that needed our help."

"I've never really been a political activist or anything. But I just started writing to my senators."

Robinson passed away in May due to his illness. Wife Danielle Robinson is seen here during his burial ceremony.

Zeier said she did not get much response at first, but eventually got the attention of Sen. Sherrod Brown, D-Ohio, which led to three years of lobbying efforts.

Brown, along with his Republican counterpart, Sen. Rob Portman, announced on Thursday that they are presenting a companion bill in the Senate.

“This is a cost of going to war that we have to take responsibility for as a country," Brown said in a recent statement. "On the Vets committee we have a long history of putting party politics aside to work on behalf of the people who served this country, and I’m hopeful we can make progress on this bill, to take steps to help connect the dots between exposure to burn pits and the illnesses that so many of our veterans have developed."

Heath's wife, Danielle, believes that he would be proud that he was able to help the scores of veterans being denied proper treatment.

"I feel like if he was still here, he would know that his fight to live longer would have more meaning behind it, not only just to be with his friends and family, but to be paving the way to help other soldiers," she said. "With the way his drive and motivation were, I think he would just be feeling like his battle is another step to accomplishing something huge that could help his brothers and sisters in the military."