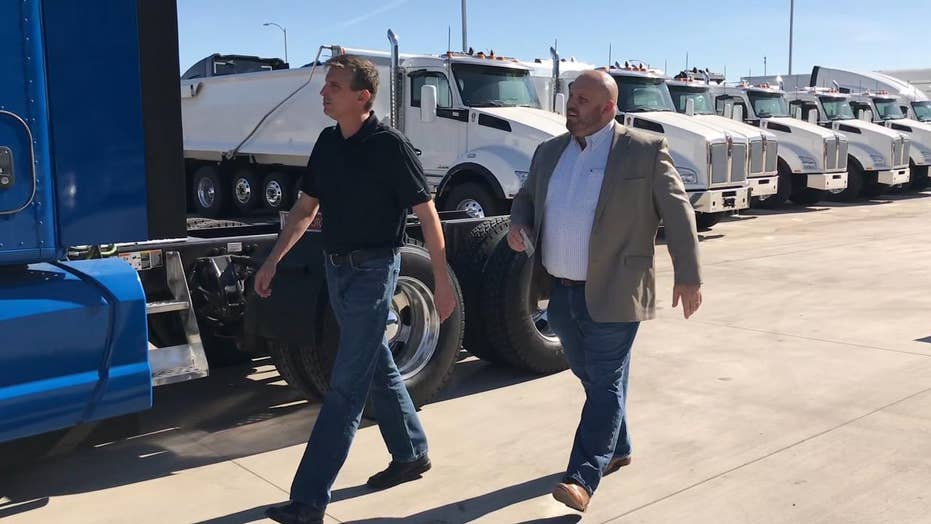 A non-profit group of truckers and human trafficking survivors are raising awareness by placing stickers on trucks. They hope to put an end to this issue.

Truckers are the eyes and ears on the roads, seeing first-hand that it’s an atrocity sweeping the nation.

Truckers Against Trafficking, a non-profit of truckers and trafficking victims, wants every American to know it can happen anywhere—not just outside the country or in rural areas.

“It’s everywhere now—it can be right next door to you,” Kevin Kimmel, a truck driver, said. “This is modern day slavery... That’s exactly what this is.”

"It’s everywhere now—it can be right next door to you...this is modern day slavery"

Kimmel, like many, wasn’t aware of the issue or how big of a problem it has become. Until he stumbled upon a victim one day when he made a call at a truck stop. A 20-year-old woman was with a couple in an RV. He said something about the situation didn’t seem right to him, so he called authorities to report the incident. That call rescued the woman – and it showed how truckers, or anyone who makes a call, could help fight human trafficking.

“This is a huge problem and until we educate the people on what it is, it’s going to keep happening,” Kimmel said.

Truckers Against Trafficking are working to combat this problem by raising awareness and conducting training for drivers on what signals to look for to report any potential trafficking case.

Along with that awareness, January is National Slavery and Human Trafficking Prevention Month. Truckers Against Trafficking this month partnered with Arizona’s Attorney General and the Arizona Trucking Association to place more than 25,000 stickers on trucks raising awareness of the issue.

Beth Jacobs is a human trafficking survivor. She was trafficked for six years after she was coerced by someone she thought she could trust from a pool hall by her bus stop and now works as a field trainer for Truckers Against Trafficking, spreading awareness and helping other survivors cope.

“It’s like I was stripped from everything that I owned,” Jacobs said. “The only difference between what happened to me and somebody being trafficked in Burma, for example, is that I was in the U.S.A.”

“The only difference between what happened to me and somebody being trafficked in Burma, for example, is that I was in the U.S.A.”

According, to the Human Trafficking Hotline – there are an estimated 21 million people trafficked around the world with $32 billion in estimated profits generated by human trafficking globally. There are 29 countries that still haven’t joined the Palermo Protocol to fight human trafficking.

“I truly believe that if people knew what to do, somebody would’ve helped me. And that would’ve never happened to me."

Jacobs said the stickers will show that a trucker with a sticker is a “safe person.”

“Knowing that somebody is no longer calling us a lot lizard and is looking at us as a person, not as a victim—makes a huge difference,” she said. “It will help victims come forward. It will help victims escape. Somebody could approach someone with a sticker on their truck and ask for help.”

"It is going on all around you…I’d like people to know the degree of which this is going on right in front of them and that lives are at stake. A simple phone call can save a life."

Kimmel and Truckers Against Trafficking encourages anyone seeing something suspicious or victims who need help to call or text The National Human Trafficking Hotline: TEXT 233733 (BE FREE) or call 1-888-373-7888.