Isaias makes landfall in the Carolinas, knocking out power and sparking fires

Over 100 million Americans from North Carolina to Maine are under tropical storm warnings on Tuesday as Isaias churns north up the East Coast, bringing the threat of flash flooding and tornadoes.

Isaias made landfall late Monday night as a Category 1 hurricane near Ocean Isle Beach, N.C., packing winds of 85 mph with higher gusts before being downgraded hours later to a strong tropical storm.

As the eye came ashore, multiple fires were reported in the coastal Carolina community as up to three feet of floodwaters were observed. Several rescues have also taken place as the system heads northward, with at least one deadly tornado confirmed.

"The winds and the rain and we're going to see obviously power outages, tree limbs down, maybe trees down as well," Fox News senior meteorologist Janice Dean said on "Fox & Friends." "In some cases, the strongest tropical storm the Northeast has seen since Sandy, so that's saying a lot."

As of 11 a.m. EDT, U.S. National Hurricane Center (NHC) in Miami said the storm now has maximum sustained winds of 70 mph -- just 4 mph shy of officially being a hurricane -- and is located about 70 miles southwest of Philadelphia. Isaias is moving north-northeast at 33 mph.

Even though the system has now weakened to a tropical storm, it will continue to bring heavy rain, strong winds, storm surge, and tornadoes across the Mid-Atlantic and Northeast through Tuesday night.

Tornado watches were posted from Virginia to the New York City area as of early Tuesday, where brief twisters are possible.

The storm has generated multiple reports of tornados, with one twister in North Carolina causing at least one death and damage to a mobile home park. 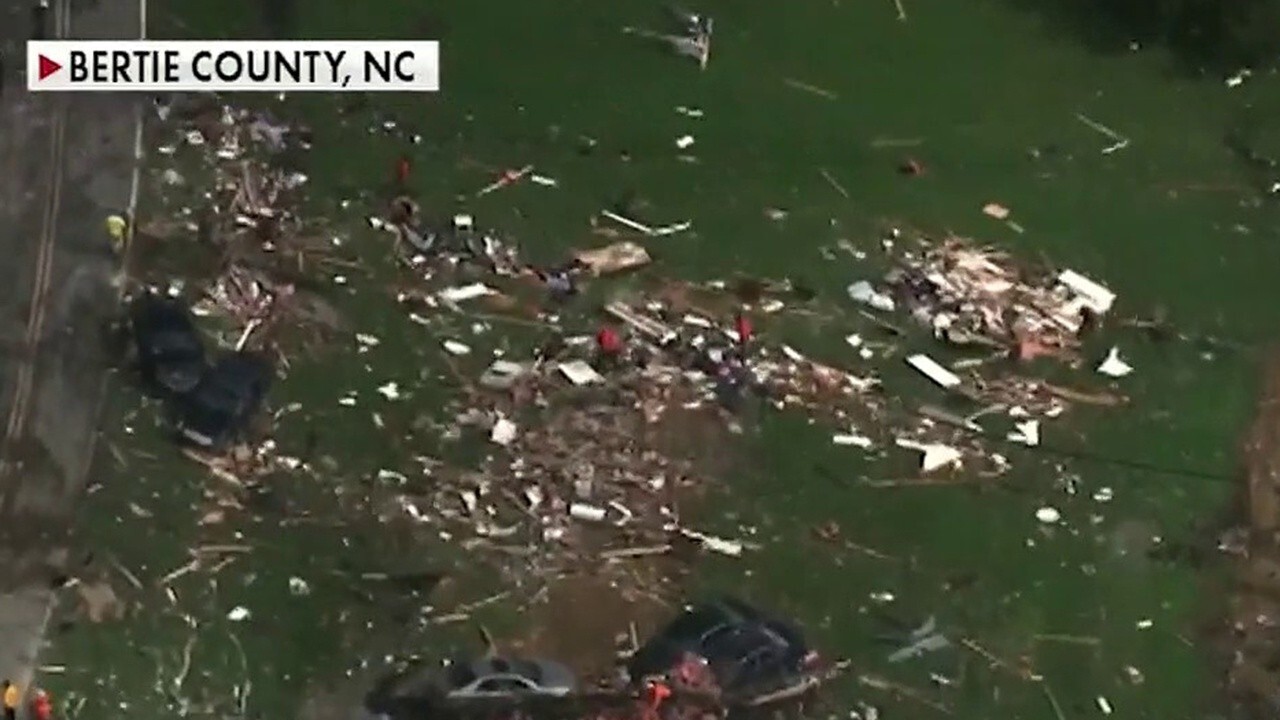 Officials in Bertie County said on Facebook "with heavy hearts" that a tornado touched down in the Morning Road area of Windsor. Bertie County Sheriff John Holley told The Virginian-Pilot that at least two people were killed and several are missing after the twister struck a mobile home park.

"We are beyond grateful for all of the support from our surrounding counties, and ask that you keep us and all responding agencies in your thoughts and prayers," county officials said on Facebook.

The threat of flooding from Tropical Storm Isaias. (Fox News)

Flash flooding will be a big risk for areas along its path from Virginia up to Maine.

Forecasters are calling for a wide swath of 3 to 6 inches of rain, with isolated amounts of up to 8 inches for some locations.

A weakening Isaias will then continue up the East Coast, giving the Mid-Atlantic, Northeast, and New England rain and gusty winds Tuesday evening into Tuesday night.

"It's moving quickly, that's the good news, but the impact is going to be quite impressive for some of these regions," Dean said.

Wind gusts over 50 mph across the Mid-Atlantic and Northeast could cause power outages and tree damage.

According to power-outage tracking website poweroutage.us, more than 680,000 customers have lost electricity, most of them in North Carolina and Virginia.

In Suffolk, Virginia, near the coast, multiple homes were damaged by falling trees, and city officials received reports of a possible tornado. A fire station downtown sustained damage including broken window. A photo posted by city officials showed a pile of bricks lying next to a damaged business. 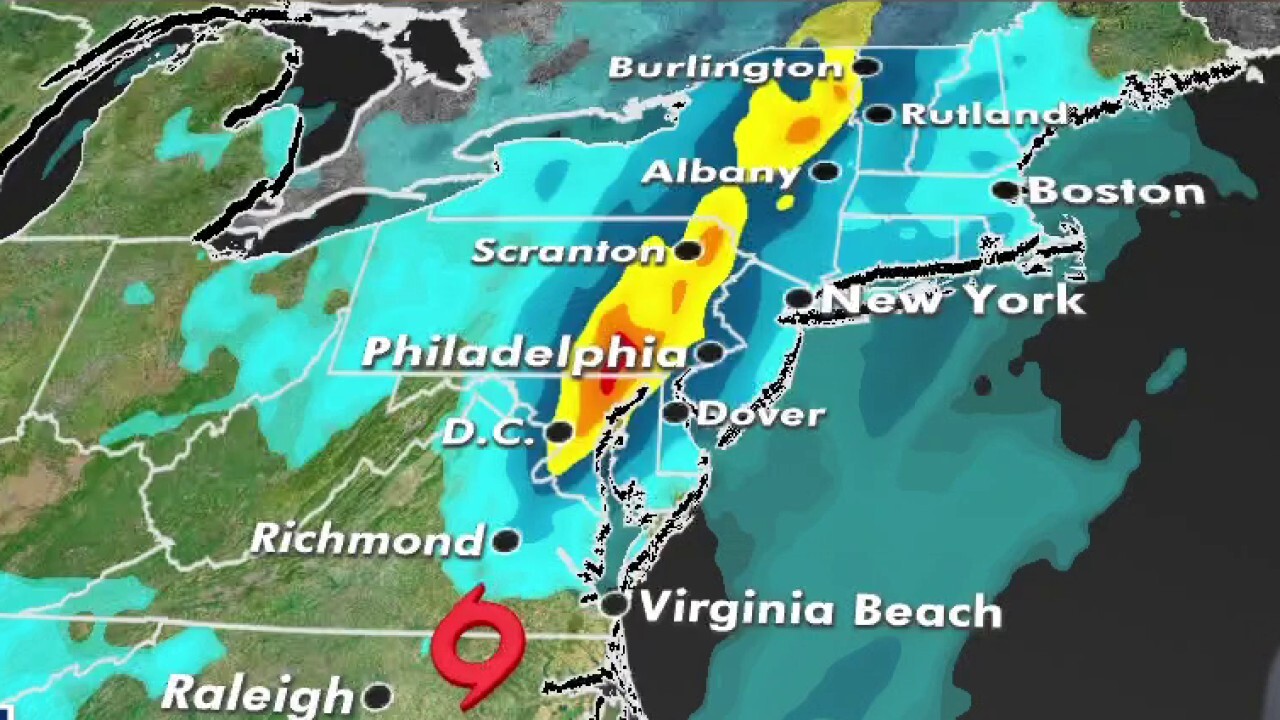 As the eye of the hurricane came ashore late Tuesday night, rescue crews in North Carolina were busy responding to everything from floods to fires.

Horry County Fire Rescue shared photos on Twitter of the "multiple structure fires" just as the storm made landfall.

Firefighters from the town’s fire department were battling the blaze with assistance from Horry County firefighters in South Carolina, Tony Casey, a spokesperson for Horry County Fire Rescue, told The Associated Press.

About 80 miles north of Ocean Isle Beach, about 30 people were displaced due to a fire at a condominium complex in Surf City, news outlets reported. It is not clear if the fires were connected to the storm. No injuries have been reported.

In Brunswick County, N.C., a group of nine people and their dog were rescued overnight from Oak Island.

A group of nine people and their dog were rescued overnight from Oak Island as the hurricane roared ashore. (Brunswick County Sheriff's Office)

Further details about the rescue were not yet known.

In Southport, North Carolina, the storm surge and wind gusts left dozens of boats piled up against the docks, and many decks facing out on the water were smashed by the surge. People were out Tuesday morning raking debris or picking it up with their hands and dropping it in trash cans.

Boats are piled on each other in the marina following the effects of Hurricane Isaias in Southport, N.C., Tuesday, Aug. 4, 2020. (AP Photo/Gerry Broome)

Royce Potter, the owner of Potter’s Seafood, told the Associated Press he rode out the storm on a boat docked near his business, which sustained water and wind damage after he said forecasters led him to believe the area would be spared.

“They got this wrong,” he said, visibly shaken. “I’ve ridden storms out here for years.”

Isaias killed two people in the Caribbean and roughed up the Bahamas but remained at sea as it brushed past Florida over the weekend, providing some welcome relief to emergency managers who had to accommodate mask-wearing evacuees in storm shelters.

As the storm neared the shore, a gauge on a pier in Myrtle Beach, S.C. recorded its third-highest water level since it was set up in 1976. Only Hurricane Hugo in 1989 and Hurricane Matthew in 2016 pushed more salt water inland.

North Carolina Gov. Roy Cooper warned residents on Monday that the storm could be dangerous regardless of its strength. He urged those evacuating to turn to shelters as a last resort, citing coronavirus risks and the need to operate shelters at reduced capacity to allow for social distancing.

A bell tower toppled outside of Southport Baptist Church in Southport, N.C. as hurricane Isaias moved through North Carolina on Tuesday, Aug. 4, 2020. (WECT-TV via AP)

“Whether it’s labeled a tropical storm or a hurricane, you should take this storm seriously, and make sure your family is ready,” Cooper said.