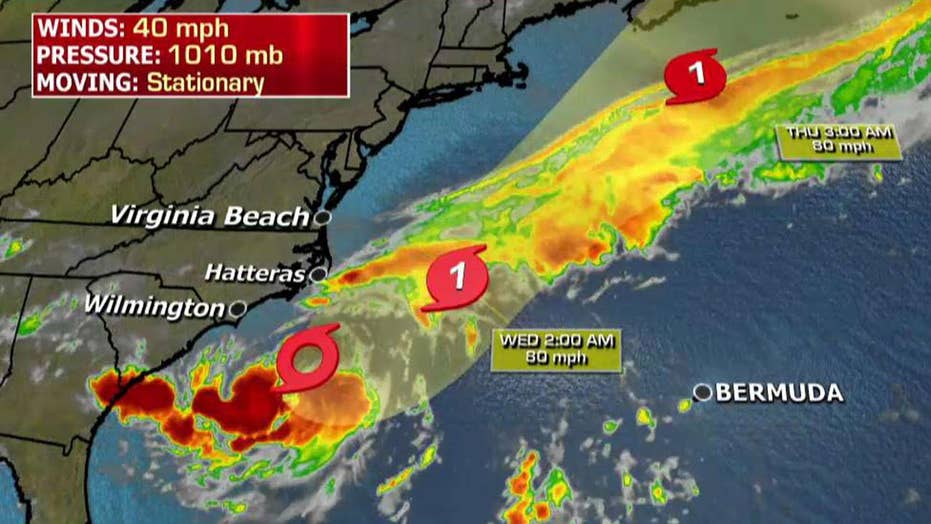 Tropical system forms off the coast of North Carolina

Rick Reichmuth brings the latest on the weather.

The third named storm of the 2018 Atlantic hurricane season formed off the coast of North Carolina on Sunday, as forecasters warned beachgoers of potentially dangerous surf in the days ahead.

The National Hurricane Center said in a 11 a.m. advisory that Tropical Storm Chris has formed about 160 miles south of Cape Hatteras, N.C., with sustained winds of 45 mph and is stationary.

"Chris is forecast to become a hurricane on Monday with some additional strengthening thereafter," the NHC said.

The effects from Chris have already taken a deadly turn in North Carolina. While the storm was still categorized as Tropical Depression 3 on Saturday, a man died when he was caught in rough surf on a North Carolina beach.

A map showing the location and forecast track of Tropical Storm Chris. (NOAA)

While the storm is expected to remain away from land, it's still kicking up the surf during the peak summer beach season along the East Coast.

"Swells generated by Chris are expected to increase and affect portions of the coasts of North Carolina and the mid-Atlantic states into early next week," the NHC said. "These swells could cause life-threatening surf and rip current conditions."

2018 ATLANTIC HURRICANE SEASON TO BE 'NEAR OR ABOVE-NORMAL,' NOAA SAYS

The town of Kill Devil Hills said in a news release a man in his mid-60s was reported missing in the rough surf around 12:15 p.m. on Saturday on a beach where red flags were present. Lifeguards spotted the man about 15 minutes later in the water and pulled him from the ocean.

Rescuers administered CPR  to the man and he was transported to a nearby hospital, where was pronounced dead, officials said.

Forecasters earlier this year said that the Atlantic hurricane season is expected to be close to "normal" with  10 to 16 named storms with winds of 39 mph or higher, of which 5 to 9 will strengthen into hurricanes. Of those storms, there will be 1 to 4 major hurricanes, which are classified as Category 3, 4 and 5 with winds of 111 mph or higher.

The list of names for the 2018 Atlantic Hurricane Season. (NOAA)