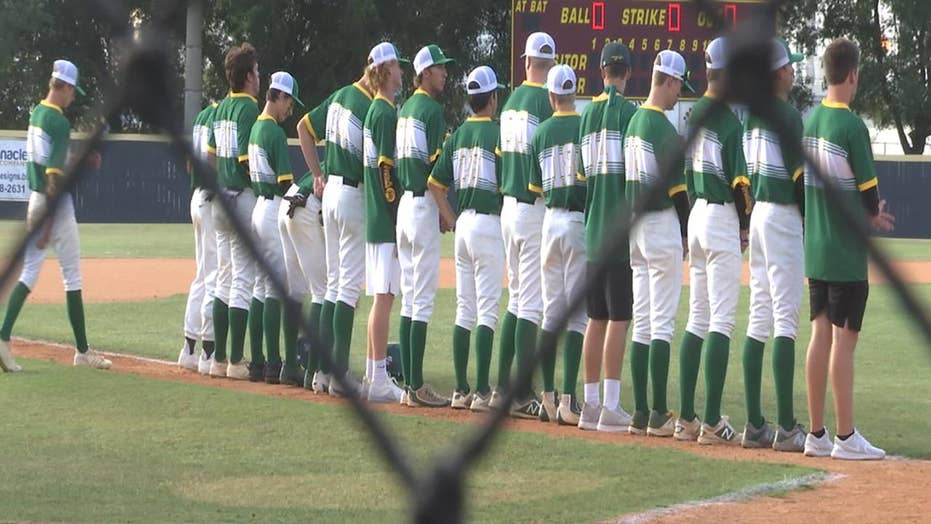 DEER PARK, Texas – At approximately 7:50 a.m. Friday, Rome Shubert was shot in the head at Santa Fe High School in Texas. He was one of 13 people injured by a suspect with a gun and desire to kill.

At 7 p.m. Saturday, Shubert walked onto a baseball field with his Santa Fe Indians teammates for a playoff game.

“It made me proud of the way they came out here, after everything that happened,” Shubert said of his teammates.

“It made me proud of the way they came out here, after everything that happened.”

Shubert, a pitcher, did not play Saturday. But his mere presence was strengthening, and it appeared to inspire the entire team and fans in the overflowing stands.

Santa Fe High School pitcher Rome Shubert had only a Bandaid on his neck Saturday night after getting shot in the head Friday morning. (Fox News)

“It was a pretty intense game," Shubert said. "I mean, all those people there was very intimidating to some people. But emotions were just really high.”

The game ended up a 7-0 loss for Santa Fe versus Kingwood Park High, which eliminated the Indians from the regional playoffs. But the outcome seemed important only to the players and coaches. The fans, while understandably disappointed, appeared happy just to know a group of players who were willing to put themselves out there only 36 hours after a horrific tragedy.

Santa Fe received an offer to delay the game until Sunday if the Indians felt they weren't ready to play. Coach Ronnie Wulf left the decision entirely up to the Indians players.

He gave them a talk, left the team alone in a room, and they decided not to wait.

“I think it’s the right decision. I’m not happy how it came out, that’s just the way it is. There’s a lot of emotion and you can’t really fix that,” Wulf said.

The coach and players wore tape on their wrists with the initials of the 10 people who were killed. Fans in the stands wore green shirts reading, “Stand as One” on the front and “Santa Fe Proud” on the back.

“It definitely shows you the support we have. Our community’s very strong. And you know, you can’t tell, it feels like half our town’s here right now. It’s amazing,” said Mayor-Elect Jason Tabor.

“It definitely shows you the support we have. Our community’s very strong. And you know, ... it feels like half our town’s here right now. It’s amazing.”

There were a lot of teary eyes throughout the night. The fans cheered, stomped their feet and clapped their hands like they would at any other game. But one regular said the attendance was well beyond an average game.

“We get a lot of support from everybody, all across the country. It’s just an amazing outpour,” Tabor said. “We’re hurt but we’re not broken and we will heal from this and we’ll come back even stronger.”