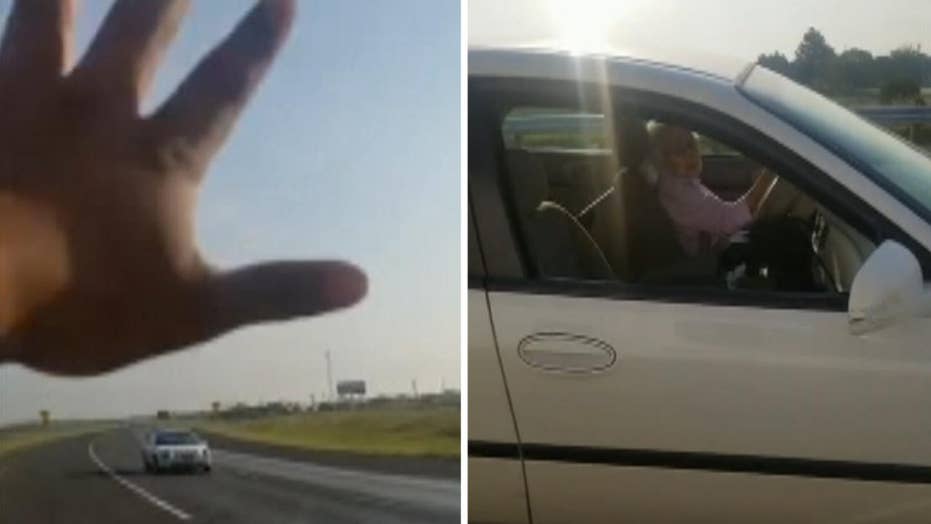 Raw video: Hero driver alerts elderly woman that she's driving on wrong side of the highway near Lubbock.

WARNING: GRAPHIC LANGUAGE IN VIDEOS BELOW

A Lubbock, Texas man was driving on Highway 183 between Seymour and Mabelle last week when he noticed a 94-year-old woman going full speed in the wrong direction.

“I drive 537 miles a day so I see many wild things on the road but absolutely nothing this terrifying! “ Thomas Prado, who drives a transit van and makes deliveries, wrote Wednesday in a Facebook post, which has since received more than than 1,000 reactions and shares.

Prado said he and another person who was driving a semi-truck had to “swerve” to avoid hitting the elderly woman, who has not yet been identified.

“I remember sitting there and I just thought please don't let this be her day," Prado told KCBD News.

That’s when he decided to help ensure it wasn’t.

One video shows Prado speeding ahead of the woman, eventually pulling ahead of her and cutting across the median. He gets out of his car at one point, desperately motioning to the woman to stop. But she continues to drive on.

Prado then gets back into his vehicle, driving off in hopes to catch up with her before she reached the bridge ahead.

“Stop! Stop!” he yells as the woman finally slows to a stop and rolls down her window.

In the next video, Prado gets out of his car and runs over to the woman. Offering to drive her car back onto the correct side of the highway, he then helps her out of the vehicle and escorts her to the passenger side.

"I asked, ‘Do you have anyone I can call?’ and all she told me was ‘I have a cat,’” Prado recalled to the news station, adding he knew at that moment the woman was confused.

Local authorities, who arrived not long after to assist the woman, told Prado the woman is doing alright, KCBD News reported.

On Facebook, Prado wrote the moral of his post is “to look after your elderly family, friends, or neighbor.”