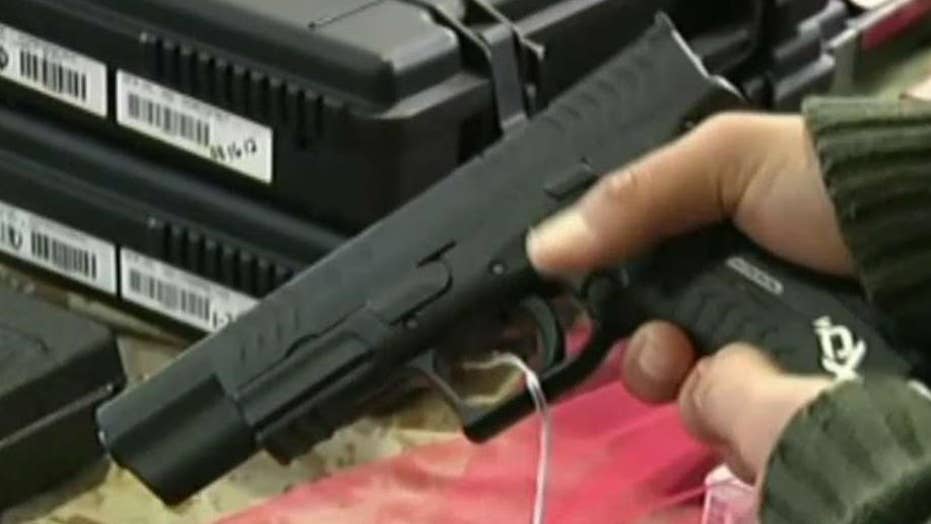 Gun rights supporters in Texas counted down the hours, minutes and seconds to New Year's Day, because when the clock strikes midnight, licensed firearms owners in the Lone Star State can openly carry their handguns in public.

The non-profit group Open Carry Texas, which supports the law, posted a countdown on its website.

Texas already allows openly carrying rifles and shotguns, but has banned having handguns visible since just after the Civil War. On New Year's Day, it'll be the 45th and largest state to sanction some form of open carry, with California, Florida, Illinois, New York and South Carolina still banning it.

Activists with Open Carry Texas say they support the law, but that it should go farther. "Our ultimate goal will always be constitutional carry - if you can legally own and purchase a gun, you should be able to legally carry that gun without begging for government permission in the form of a license and 2nd Amendment tax," they say on their website.

Texas had nearly 826,000 concealed license holders in 2014, which ranks among the nation's highest. Openly carrying a gun will require obtaining the same license concealed weapons holders have -- be at least 21, have clean criminal and psychology records, complete a training course and pass a shooting test. Concealed handguns are even allowed inside the Texas Capitol, where license holders can bypass metal detectors.

"If you can legally own and purchase a gun, you should be able to legally carry that gun without begging for government permission in the form of a license and 2nd Amendment tax."

Under the new law, businesses can bar guns from their premises if they post approved signs outside.

Texas also has the country's most federal firearms license holders, from manufacturers to dealers, and the state cites its relaxed gun ownership rules in lobbying gun makers to move here. The National Rifle Association has traditionally pumped tens of thousands of dollars into Texas' state political races, more than it spent many other places, though contribution totals look to be waning recently.

The original open carry bill included a "no-stop" provision barring police from demanding to see the license of someone simply for openly carrying their gun. Tea party legislators didn't want 2nd Amendment rights infringed, while Democrats worried about racial profiling, concerned that blacks and Hispanics might be asked for their licenses more than their white counterparts.

"If I get a gun, I guess I'd better put my hands up," state Sen. Rodney Ellis, a Houston Democrat who is black, said when the measure was debated on the Senate floor.

Austin Police Chief Art Acevedo was an outspoken critic of the "no-stop" provision, saying it would effectively bar police from doing their jobs while endangering the public. Under pressure from Acevedo and other police chiefs, as well as state law enforcement organizations, that language was stripped from the final open carry bill.

But Michael, who is readying Acevedo's force for the new law, said he doesn't expect many officers to ask for licenses. The department is even training its dispatchers to educate the public on the law change, anticipating a barrage of 911 calls about someone openly carrying a gun.

"The call-taker will say it's now legal to do that," said Michael, who said his department has been discussing preparations for open carry for months with police departments across Central Texas.

Police "don't want to not act and then have something devolve into a mass shooting incident, but harassing every person with a holster gun isn't going to solve that," said Shannon Edmonds, director of governmental relations for the Texas District and County Attorneys Association.

"The irony is that you saw many law enforcement agencies lobby strongly against that provision that would have restricted them outright from ever asking if someone had a license absent other evidence of a crime," Edmonds said, noting that's changed after a number of those same agencies talked with their legal counsels.

Not demanding to see licenses, though, could also make it easier for unlicensed Texas residents to take advantage of the don't-ask environment.

"We've changed things here a lot and we've not thought this through," said Charley Wilkison, executive director of the Combined Law Enforcement Associations of Texas, the state's largest law enforcement officers' union. "People will drive without a license and we can sure count on them to carry a weapon without training or license."