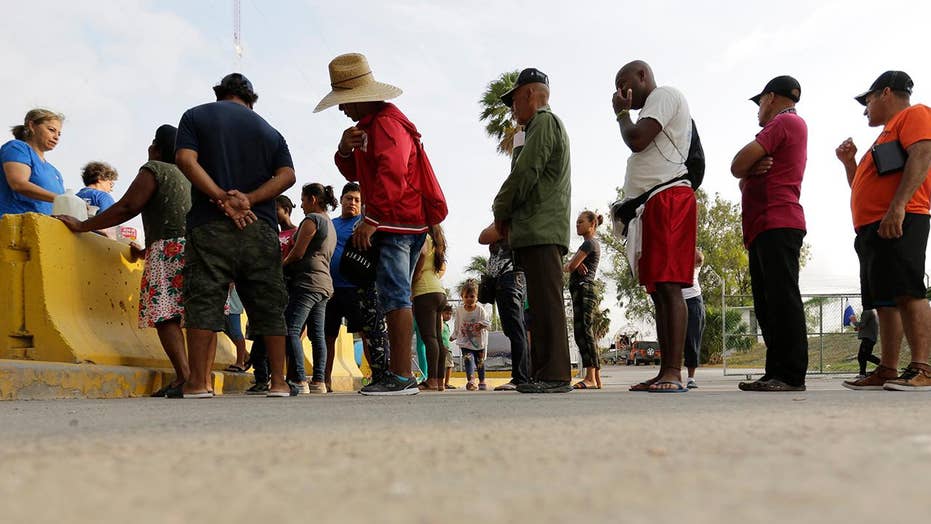 Sen. Lindsey Graham set to announce a new plan to have migrants to file for asylum in their own country or Mexico, not in the U.S.; William La Jeunesse reports from Los Angeles.

When President Trump took office, he promised to end "catch and release." Migrants believed him as apprehensions in April 2017 fell to a record low of 15,798.

Since then, migrants learned the U.S. can do almost nothing to stop them. Apprehensions have since soared 582 percent to levels not seen in almost two decades – and almost double what President Obama in 2014 called a “crisis.”

“Why is it doubling? Because word's out on the street in Central America – if you bring a minor child with you to America, we can only hold a minor child for 20 days," South Carolina Sen. Lindsey Graham said this weekend. "Will we release everybody, including the adults that never show up for the hearing cases three years from now? It's also been found out in Central America. You ask for asylum. Nobody's trying not to get caught."

"We're not going to leave until the border is secure,” said Shanahan, who is trying to transfer $1.5 billion from numerous defense projects to secure the Southwest border.

In South Texas, border agents the last several days apprehended 229 migrants an hour, or 5,500 a day, forcing the agency to set up tents in parking lots and hiring jets at $16,000 a flight to send adults to nearby Del Rio just for processing.

Pictures released by the Rio Grande Valley sector show migrants piling up in makeshift tents in parking lots as agents struggle to handle the surge.

“Resources consumed by the massive influx of illegal aliens and these humanitarian efforts along the South Texas border are beyond a breaking point and has put border security at risk”, said Chief Patrol Agent Rodolfo Karisch

As for the surge itself, few seem pleased. Mexico blamed the U.S. for not processing Central Americans faster, leaving 13,000 asylum seekers stranded and on waiting lists in Mexico.

Border cities in the U.S. blame the border patrol for dumping immigrants in their communities, waiting at bus stations for money to arrive from relatives. And the American Civil Liberties Union is complaining about migrant rights and the conditions in shelters.

"The No. 1 concern is the detention conditions in these temporary border patrol facilities that really have no regulation," said

Graham promises to introduce a bill Wednesday to help solve the problem. It would require migrants to file for asylum either in their own country or Mexico, not here.

Most Democrats oppose that. The bill would also allow the U.S. to deport unaccompanied children and hold families in detention up to 100 days until the asylum claim is completed, up from the current 20-day maximum.

"We're going to go to 100 days. We'll hold minor children for 100 days so that we can actually process the entire family without letting them go. We're going to increase judges by 500," said Graham. "We've got an almost 930,000 backlog of asylum claims. We're going to wipe out the backlog."

House Democrats have yet to name their price for any legislation. But they promise any solution will address more than just border security.