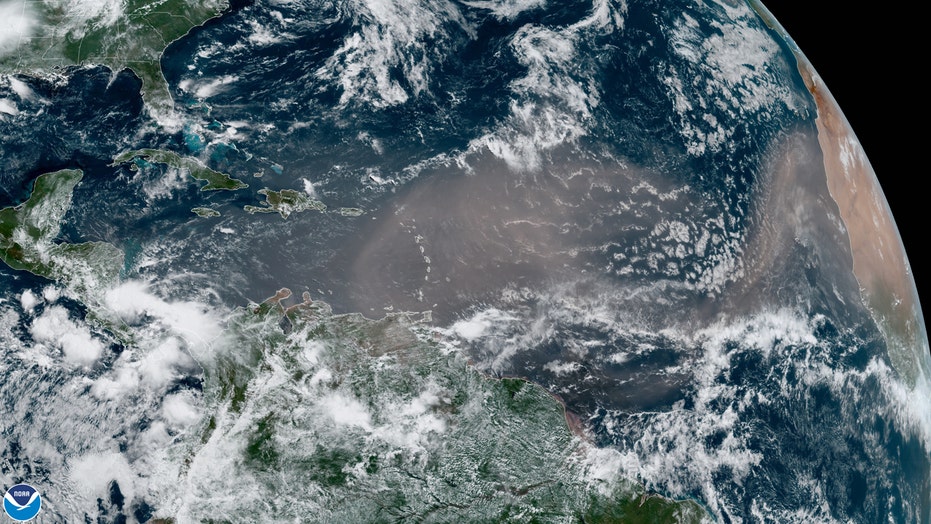 An abnormally large plume of dust from the Sahara Desert in Africa arrived in the Caribbean on Sunday after spending the past week crossing the Atlantic Ocean and is bound for the Gulf Coast.

The National Oceanic and Atmospheric Administration (NOAA) said the plume was first captured on June 7, blowing west off the African continent over the Atlantic.

The plume can be seen in a deep orange and light pink blob on satellite imagery.

The NHC said a second plume is also coming off Africa and making its way over the eastern Atlantic.

A NASA satellite photo showed the cloud of dust over the Atlantic on Thursday, which the space agency described as "tremendous."


Although much of the dust remains above the surface and causes hazy skies and colorful sunsets, it can aggravate those with respiratory issues.

The dust does typically hamper the formation of tropical cyclones and hurricane strengthening.

GULF OF MEXICO WATER DISCOLORATION AT FLORIDA BEACH WAS DUE TO STORM WATER, NOT SEWAGE, OFFICIALS SAY

As of Sunday, the NHC is not forecasting any activity in the Atlantic Basin for at least the next week.

A large plume of Saharan dust is seen reaching the eastern Caribbean on June 21, 2020. (NOAA/GOES-East)

Another feature that comes with these massive dust clouds is really beautiful sunrises and sunsets as the sun reflects off of the dust.

Dramatic sunsets can be expected across the South this week.

According to NASA, winds typically loft about 800 million metric tons of desert dust from North Africa.

The dust can end up affecting air quality as far away as North and South America, but also plays an important ecological role, such as fertilizing soils in the Amazon and building beaches in the Caribbean.