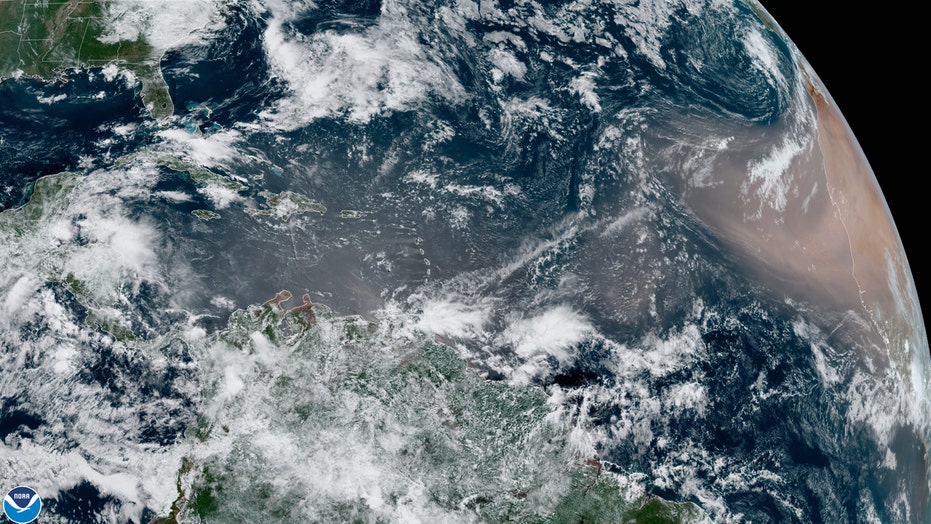 A massive cloud of dust from the Sahara desert is swirling across the Atlantic Ocean and may reach the Gulf of Mexico next week, which forecasters say may bring the potential for some spectacular skies.

The National Oceanic and Atmospheric Administration (NOAA) said that the plume was first captured on June 7, blowing west off the African continent over the Atlantic.

GULF OF MEXICO WATER DISCOLORATION AT FLORIDA BEACH WAS DUE TO STORM WATER, NOT SEWAGE, OFFICIALS SAY

SAL activity usually "ramps up" and peaks from late June to mid-August, with individual outbreaks reaching as far west as Florida and even Texas.

Some of these dust clouds can cover vast areas of the Atlantic, areas sometimes as large as the lower 48 United States, according to NOAA.

The National Weather Service (NWS) office in Houston said that the most recent large cloud that has moved off of Africa is doing just that, and will move into the Caribbean by Sunday and Southeast Texas by next Tuesday.

A dust cloud from the Sahara swirls west over the Atlantic Ocean on June 17. (NASA/GOES East)

Jason Dunion, a University of Miami meteorologist and research scientist with NOAA’s Hurricane Research Division, told the Palm Beach Post that the dust cloud making its way across the Atlantic is "significant" based on its size and how far west it may go.

"This one lifted a lot of dust off the Sahara," he told the paper.

Satellite imagery on Monday showed the SAL streaming off the coast of Africa.

The NWS office in San Juan, Puerto Rico noted that Saharan Dust is bringing dry air by Thursday to the island, before more dry air arrives by Sunday with the larger dust cloud.

ARIZONA WILDFIRE NOW THE LARGEST IN US AFTER DOUBLING IN SIZE, BURN SCAR SEEN FROM SPACE

If the dust cloud makes it to the Gulf of Mexico by Tuesday, forecasters said residents will be gifted with colorful sunsets.

"If this dust reaches the area we should expect some red skies at sunrise and sunset for a few days and probably drier weather as well," the NWS Houston said.

Besides dry conditions and better sunsets, the dust clouds can also affect tropical cyclones and tropical disturbances now that hurricane season has started.

According to NOAA, the dry, dusty air has about 50 percent less moisture than the typical tropical atmosphere.

"This extremely dry air can weaken a tropical cyclone or tropical disturbance by promoting downdrafts around the storm," the agency states.

Strong winds in the SAL also increase wind shear in and around storm environment, while the warmth from the dust clouds stabilizes the atmosphere, suppressing the formation of clouds.

What you should about this year's 2020 Atlantic hurricane season. (Fox News)