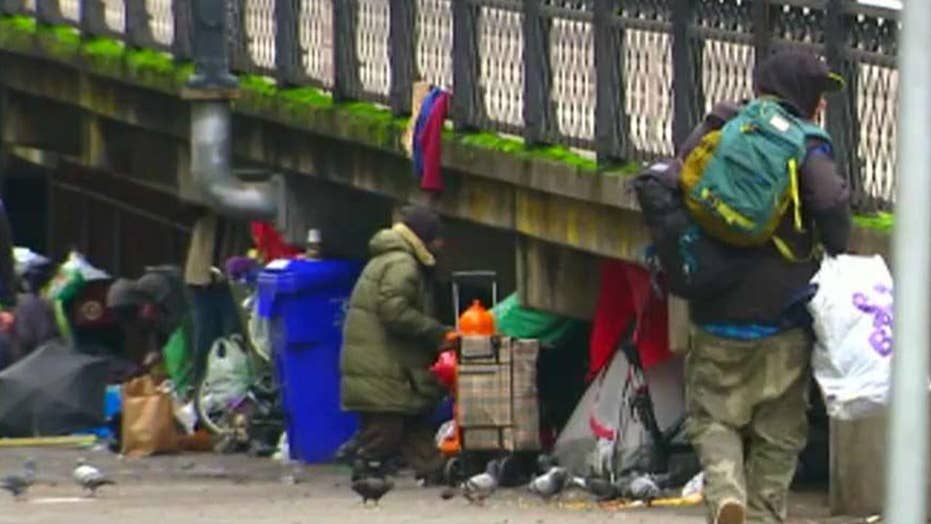 Store owners say they are tired of picking up needles left behind by the homeless addicts.

As homeless encampments continue to crop up in San Francisco, the city's leader is promising an "aggressive" crackdown starting this week in one neighborhood to clear sidewalks of tent camps for good.

San Francisco Mayor Mark Farrell told the San Francisco Chronicle on Friday the city has gone from being compassionate towards the homeless population to enabling them, which as the city's leader, "I don't stand for that."

“Enough is enough,” Farrell told the paper. “We have offered services time and time again and gotten many off the street, but there is a resistant population that remains, and their tents have to go.”

San Francisco's mayor is promising an "aggressive" crackdown on homeless encampments on sidewalks this week. (Reuters)

The city plans to conduct sweeps starting this week through the city's Mission District to clear out tents set up along sidewalks. As a supervisor, Farrell was behind legislation passed by voters that allows the city to remove tents as long as they provide alternate shelter and give one day’s notice.

There have been sweeps in the area before, but campers returned days later or simply moved a few blocks away, according to KTVU.

Farrell said this time will be different, as the city plans to have a "dedicated team" to make sure people don't come back.

“The tents are a public safety hazard for the people living in them, and for the residents of San Francisco,” Farrell told the Chronicle. “And they are gone.”

San Francisco Mayor Mark Farrell told the San Francisco Chronicle on Friday the city has gone from being compassionate towards the homeless population to enabling them. (Reuters)

But homeless outreach groups contend the mayor's action may just be moving the problem elsewhere.

“Without a relocation plan, it’s just more of the sidewalk shuffle,” Jennifer Friedenbach, executive director of the Coalition on Homelessness, told the Chronicle.

Friedenbach told the paper many tent dwellers suffer from mental illness, and "don't fit into a crowded situation" if put into a shelter.