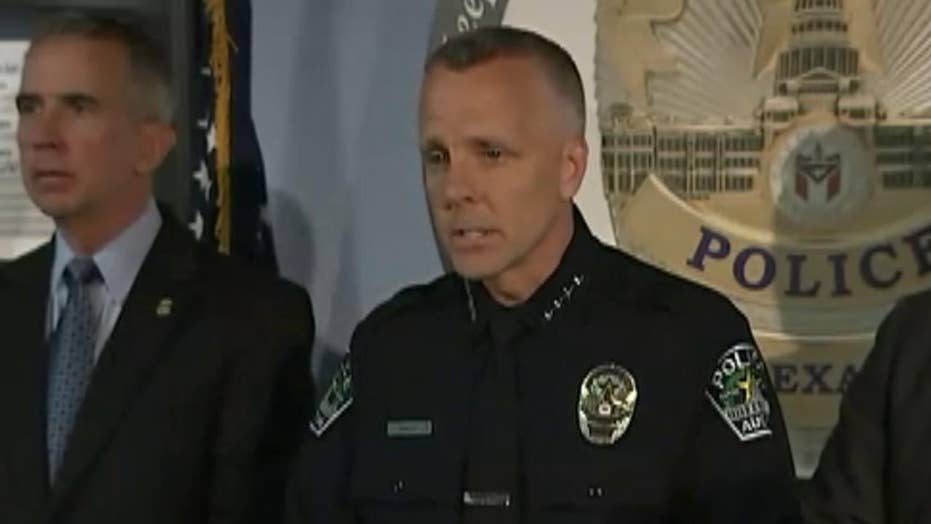 Austin Police Department raises reward for information leading to the capture of a suspect in bombing case to $100,000.

A reward offered by Texas officials to anyone with information leading to an arrest in the deadly package bombing investigation in Austin has been upped to more than $100,000.

Austin Police Chief Brian Manley announced at a news conference on Sunday that the department, the FBI and the Bureau of Alcohol, Tobacco, Firearms and Explosives (ATF) are now offering $100,000 — up from the previous reward of $50,000 — for anyone who can provide information that leads to an arrest in the case, which has left two people dead.

The six-figure reward is in addition to a separate reward of $15,000 provided by Texas Gov. Greg Abbott's office.

Manley on Sunday said investigators now believe the package bombings  "were meant to send a message."

The police chief said "we want to listen to" whomever was behind the bombings, in order to "understand what brought you to this point."

On March 2, 39-year-old Anthony House was killed after a "device" exploded on his front porch, investigators said. Ten days later on March 12, Draylen Mason, 17, was killed after a package found outside his home was brought inside.

A third package explosion on March 12 injured a 75-year-old woman. She remained in critical condition.

The explosions were believed to be linked, according to investigators, and officials said they were not ruling out any possible motives — including a possible hate crime, considering all victims are black or Hispanic. Two of the three families affected reportedly knew each other through activism in the local black community.

The package explosives involved in the three incidents were not delivered by the U.S. Postal Service or any private carrier, but were left overnight on doorsteps. Federal law enforcement officials told Fox News the packages were made to look like mail.

More than 500 law enforcement officials have investigated more than 400 possible leads in the case, Manley said Sunday. Police warned residents who find any suspicious packages to call 911, and to send tips to Austin Crime Stoppers at (512) 472-8477 or Texas Crime Stoppers at 1-800-252-8477.