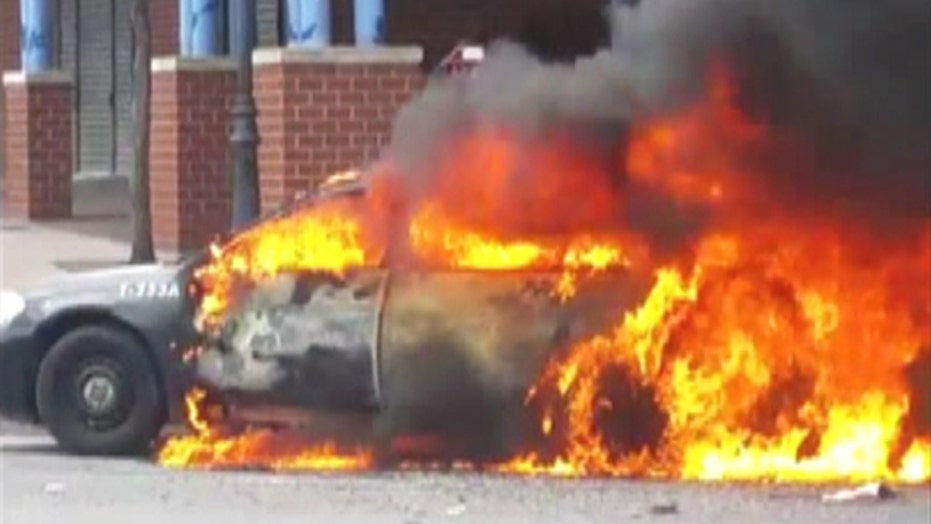 When I arrived at Pennsylvania and North Avenues Monday to cover escalating riots in Baltimore—I only saw two officials on-scene: the firefighters responding to two police vehicle ablaze. Just minutes later—they left without using a drop of water. That’s when things took a turn for the worse.

It wasn’t because those firemen were careless—but because they were unable to do their jobs. The fires kept coming—and everyone’s safety was in jeopardy.

The black pillars of smoke rose above the police vehicles—every so often a muffled “pop” from the fires would send people running as they feared they’d explode. Just steps away at the CVS store that would later serve as a fiery icon of the riots in helicopter aerial footage—looters were making their way out with whatever they could. Boxes of candy, jugs of laundry detergent and chips were all up for the taking. And people took.

Once an armored police vehicle drove by, as if to survey the scene for the line of cops dressed in riot gear waiting helplessly down Pennsylvania Avenue. Boys threw as many glass bottles as they could pitch at the vehicle.

Just before I was to give a live report by phone from the scene—I was struck. I fell, and knew I was injured. I remember worrying about how I would make it to safety as pain shot through my leg.

Out of nowhere a young man approached me, said something muffled, and swung a punch. He hit the right side of my face, sending my iPhone 6 flying from my hand. He then grabbed it and cocked his leg back to kick me in the ribs before a crowd quickly assembled to hurry me away while limping to safety. Among the good Samaritans were peaceful nearby residents who rushed to carry me away, and another journalist from Gawker who drove my car to a nearby TV station for help.

My left knee is useless right now—a torn tendon needs surgery, doctors say. But had I not been hurt so early in the riots—I’m could have faced much worse.

I’m, of course, not the only journalist to get injured in the riots. But the helmets, gas masks, and emergency contact numbers that we all save for trips into foreign danger zones are now needed here at home.