Raleigh Christmas parade: Video shows moments before and after accident that injured girl

Aerial footage from WTVD shows the moments before and after a truck collided with a girl Saturday at the Raleigh Christmas parade. (WTVD)

Joy turned to terror at a Christmas parade in Raleigh, North Carolina, when a pickup truck struck at least one of the parade performers on Saturday morning.

Video shows the horrifying moments before a young girl with the CC & Co. Dance Complex was struck by a white truck that was towing a parade float. Parade participants scattered as the driver lost control of their vehicle, honking wildly and shouting that the brakes were not working.

Paraders scattered as the truck began picking up speed down the street. A few individuals can be seen chasing after the vehicle and attempting to bring it to a stop.

They are initially unsuccessful, as the truck rolls forward while towing a float behind. 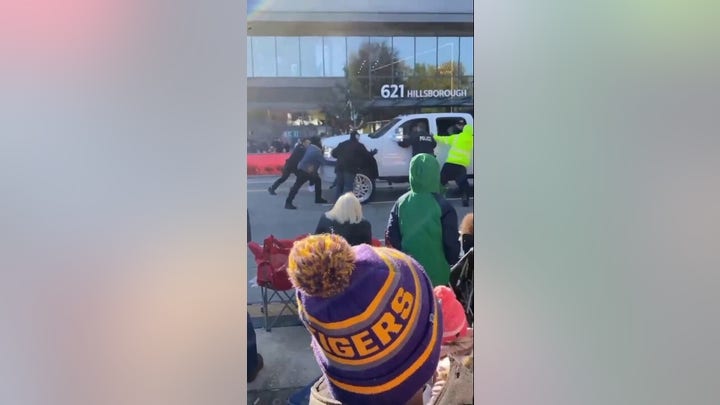 People stop a truck during the Raleigh, North Carolina Christmas parade Saturday. A girl was injured in an accident. (WTVD)

Eventually, at least six individuals, including two police officers, were able to bring the truck to a stop through sheer physical strength.

The accident left at least one person injured, as a dancer in the parade was struck by the truck.

The girl was taken to a local hospital and the extent of her injuries remain unknown.

People and first responders attend to a girl who was hit by a truck during the Raleigh, North Carolina Christmas parade Saturday. (WTVD)

Aerial footage from WTVD shows an out-of-control truck that collided with a girl Saturday at the Raleigh Christmas parade. (WTVD)

""Today started with such joy. The parade route was packed with smiling kids and it made my heart so happy to see," Raleigh Mayor Mary-Ann Baldwin said in a statement. "Now we are all devastated by the news of this tragic accident and praying for the victim and her family. It is heartbreaking."