A tragic accident brought a Christmas parade in Raleigh, North Carolina, to an abrupt stop after one of the vehicles towing a float struck a young girl, killing her, the Raleigh Police Department confirmed to Fox News Digital.

At around 10:25 a.m. Saturday, the 78th Raleigh Christmas Parade was stopped, and first responders were called to the scene after a member of the CC & Co. Dance Complex was struck by an out-of-control vehicle, WRAL reports.

The girl was taken to a local hospital for care but despite life-saving efforts she died of her injuries, police said.

Video from the scene taken by WRAL shows the accident as it happened. The truck appears to gain speed as the driver lost control. Some people fled the vehicle's path while others rushed towards the truck in an attempt to stop it from running into other members of the parade.

Witnesses said there was confusion as the scene unfolded.

People stop a truck during the Raleigh, North Carolina Christmas parade Saturday. A girl was injured in an accident. (WTVD)

"The girls kept dancing, and then very quickly parted as the truck moved through them. There were more dancers beyond this group. We were all, I think, wondering if it was part of the parade," a woman who saw the accident told WRAL.

"Perhaps [the truck] picked up a little bit of speed and it kept honking, and then there was quite a bit more chaos. Everyone started to look confused. I do not know, perhaps the fire engine and other first responders helped stop the truck. I am not clear whether or not someone was hit on the ground," she said.

Another bystander said she saw the girl on the ground with a blanket covering her. Others reported hearing tires screeching, screaming, and the vehicle's horn blaring at the time of the accident.

People and first responders attend to a girl who was hit by a truck during the Raleigh, North Carolina Christmas parade Saturday. (WTVD)

Police said the accident is still under investigation.

"Our hearts go out to the family of the victim and those who witnessed this tragic incident," the department said in a statement to Fox News Digital. "The victim’s family has asked for privacy during this very difficult time."

The driver cooperated with police and was charged with misdemeanor death by motor vehicle, careless and reckless, improper equipment, unsafe movement, and carrying a firearm in a parade.

The parade lasted for about an hour before the accident, and then it was canceled, according to WRAL. 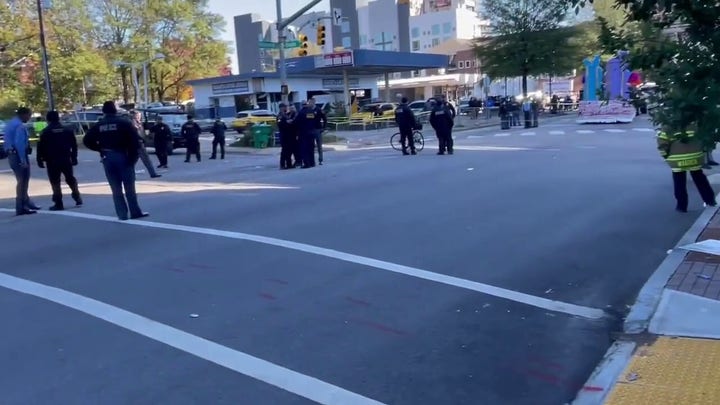 Raleigh Mayor Mary-Ann Baldwin issued a statement after the accident: "Today started with such joy. The parade route was packed with smiling kids and it made my heart so happy to see. Now we are all devastated by the news of this tragic accident and praying for the victim and her family. It is heartbreaking."