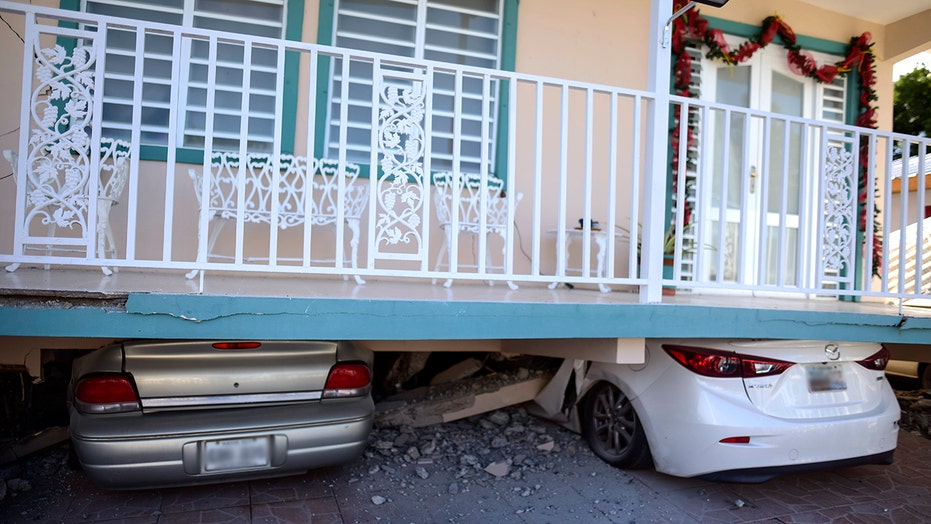 A magnitude 5.8 earthquake struck the southern coast of Puerto Rico early Monday, cracking homes and triggering landslides after a flurry of smaller quakes rattled the region over the past two weeks.

There were no immediate reports of deaths or injuries.

It was the largest of a flurry of temblors that first began the night of Dec. 28, with quakes ranging in magnitude from 4.7 to 5.1. The lesser quakes had already left some homes damaged.

After the 5.8-magnitude quake hit the region, a string of smaller temblors, including a magnitude 5 quake, shook power lines and frightened residents into the streets.

Pictures of the damage showed cars crushed under a collapsed house, caved-in roofs and other homes standing lopsided after partially collapsing.

Cars were crushed under a home in Guanica that collapsed after Monday's earthquake. (AP Photo/Carlos Giusti)

In the southern town of Guánica, Mayor Santos Seda told the AP that five homes collapsed, but only one of them was inhabited.

“This is hell,” said Alberto Rodríguez, 43, whose home collapsed on its side as the smell of gas filled the air. “We haven’t slept... you can’t remain calm here. Guánica is no longer a safe place.”

Dr. Sindia Alvarado, who lives in the southern coastal town of Penuelas, said she was petrified.

“My entire family woke up screaming,” she said. “I thought the house was going to crack in half.”

While it was unclear if aid was needed, Sen. Marco Rubio, R-Fla., said his office would contact local and federal officials to determine whether government aid was necessary.