Minnesota GOP chairperson Jennifer Carnahan on the protests in favor of the Pledge of Allegiance.

Protesters were out in force in a Minnesota city this week, upset over the city council's decision to stop reciting the Pledge of Allegiance at the start of their meetings.

The decision was announced by the St. Louis Park City Council after a unanimous vote on June 17. The amendment to the council's rules was characterized as an effort to serve a more “diverse community."

“We concluded that in order to create a more welcoming environment to a diverse community we’re going to forgo saying the Pledge of Allegiance before every meeting,” Council Member Tim Brausen said ahead of the vote.

Council member Anne Mavity, who sponsored the rules change, told KARE 11 that she didn’t feel saying the pledge was necessary, especially for non-citizens.

"Not everyone who does business with the city or has a conversation is a citizen," she said. “They certainly don't need to come into city council chambers and pledge their allegiance to our country in order to tell us what their input is about a sidewalk in front of their home.”

The council's meeting to reconsider the controversial change was held on Monday, as nearly 100 citizens waved American flags and chanted "USA!" in a bid to convince the council to reverse course before the change goes into effect next week. 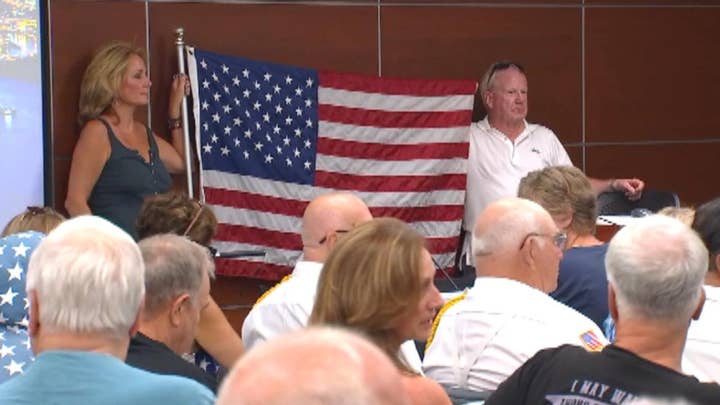 Mayor Jake Spano reportedly proposed that the decision be reversed, arguing it should have been reviewed more thoroughly before a vote was held, while Mavity proposed further meetings on the subject. No decision was reached at the meeting on reinstating the pledge.

St. Louis Park is a suburb of Minneapolis and is represented in Congress by Democratic Rep. Ilhan Omar.

"One of the gentlemen, Tim Brausen, said evidently Minnesotans are upset because we are playing with their hallowed traditions. So it was just this air of superiority and very disturbing all around," she recalled.

Carnahan said she hopes the council will see "the error of their ways" soon and reinstate the pledge.