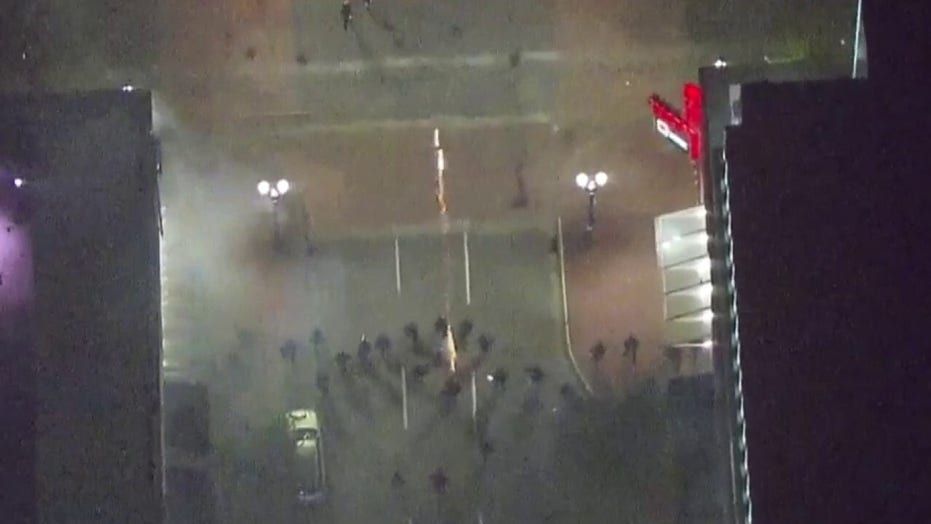 Portland police warned they would use force to protect officers after yet another night of violent clashes between rioters and law enforcement that resulted in multiple officers being struck in the face by objects thrown at them.

Thousands of peaceful protesters in Oregon's largest city kneeled or laid with their hands behind their backs during demonstrations that began early on Wednesday, in solidarity with George Floyd -- an unarmed black man that died at the hands of several Minneapolis police officers, one of whom kneeled on his neck for over 8 minutes.

But as night fell and the majority of crowds dispersed, pockets of violent uprisings began to grip the streets of Portland, for the sixth night in a row.

"We are beginning to see a nightly pattern. After hours of peaceful demonstrations and when the majority goes home, there remains people who want to commit criminal acts," the Portland Police Department said in a post on Twitter.

Officials said rioters threw fiery projectiles including fireworks and mortars at police officers while others hurled glass bottles and other objects at law enforcement.

Some individuals rushed at police officers and one officer was struck in the face, police said.

Another officer was hit in the jaw with a full can of beer.

"Force will be used to protect the officers if the actions do not stop," the department said. 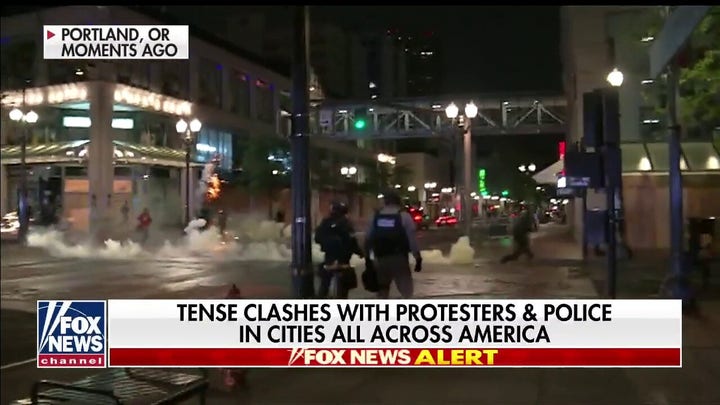 As cases of civil disturbances mounted overnight, with windows shattered on buildings, fires lit in the streets, and vandalism apparent on buildings and structures, police threatened to arrest or use force to contain the mayhem.

On previous nights, officers deployed tear gas a pepper spray on crowds and chased them through the streets.

President Trump has placed blame on some of the violent uprisings on Antifa-- a far-left militant group who have long had a history in cities like Portland for organizing violent clashes with law enforcement and white supremacist groups.

The Justice Department announced on Wednesday they would be looking into whether coordinated attempts to target police across the nation are the works of Antifa.

Portland police said Thursday that Wednesday's overnight surges of violence were mostly the work of a small group of "agitators" who set fire to a dumpster, newspaper boxes and what appeared to be a large pile of books and attempted violence against police officers.

Throughout the night, the Portland Police Bureau's Demonstration Liaison Officers engaged with peaceful protest organizers who they said "united their voices together to stop the agitators and keep the demonstration safe."

Despite instances of violent upheaval, the Police Chief Jami Resch said the overwhelming majority of protesters were peaceful and exemplified "safe and responsible demonstration."

"This speaks to the testament of the thousands of participants and sends a powerful message. I greatly appreciate the community for expressing themselves while respecting others," Resch said.