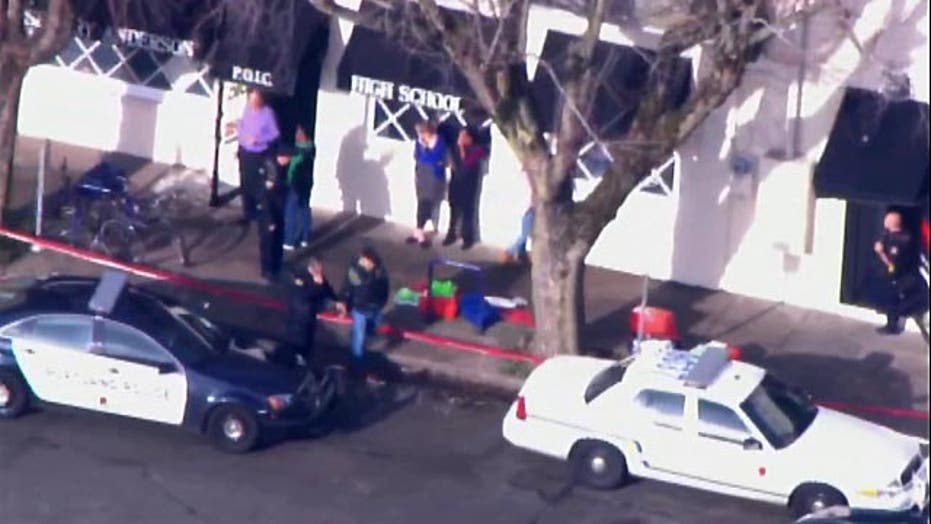 Police in Portland have arrested a suspect in the shooting that injured three people outside an alternative high school.

Authorities said they stopped a vehicle around 1:30 a.m. Saturday at North Interstate Avenue and Going Street and arrested a 22-year-old man. A handgun was found in the vehicle.

Police were searching an apartment about half an hour later as part of the investigation. The apartment is about five blocks east of the shooting near Rosemary Anderson High School.

Detectives are investigating and will release the suspect's name and charges after he is booked into the Multnomah County Jail.

Witnesses told police there may have been a dispute outside the high school on Friday, just before the shooting occurred at a street corner.

The assailant and two other people fled, and the wounded students went to the school for help, a police spokesman said. A 16-year-old girl was critically wounded while two males were hospitalized in fair condition. Another girl was grazed by a bullet.

"Based on the investigation thus far, the shooting appears to be gang-related," Sgt. Pete Simpson said Friday night in a statement.

Police gang investigators "feel comfortable saying this is a gang-related shooting based on some of the people involved," Simpson added in an interview. Police said they believe the shooter has gang ties. Simpson declined to say which victims might be linked to gangs.

The spokesman said police were still gathering details on the reported dispute.

"There was some kind of dispute between the shooter and some people," Simpson said. "We don't know if it was (with) all the victims or one of the victims."

The victims are students at the high school or in affiliated job training programs, police said.

Police identified the hospitalized victims as Taylor Michelle Zimmers, 16, who was in critical condition; David Jackson-Liday, 20; and Labraye Franklin, 17.

Olyvia Batson, also 17, was treated at the scene after a bullet grazed her foot.

Sierra Smith, a 17-year-old student, told The Oregonian she saw one of the male victims being helped by a teacher inside the school.

"He was laying on the ground. He had blood coming out of his stomach," she said. "It was scary."

Another student, Oliviann Danley, 16, told the newspaper she saw a boy run into the school and yell, "Oh my God, did I just get shot?"

Rosemary Anderson High School serves at-risk students who were expelled or dropped out, or who are homeless or single parents. According to the school's website, 190 students annually are enrolled at the north Portland location. The school also has a second location in Gresham.

Gang violence in Portland isn't a new phenomenon. Some of the violence occurs between rival gangs, but bystanders have also been hurt.

"We've made a lot of progress in addressing the gang problem, but we haven't eradicated it," Mayor Charlie Hales said. "Today's really a sad reminder that it's still with us."

Portland police have said they saw a spike in gang crime over the summer and have complained they don't have adequate resources to address the problem. Recent violence includes a man killed in a drive-by-shooting in June and another man killed in a separate shooting. A 5-year-old boy also was shot in the leg while playing at an apartment complex.

A Multnomah County report on gang activity released in June said crime in the county that includes Portland actually decreased from 2005 to 2012. As inner-city Portland gentrifies, the report said, criminal activity is shifting from northern neighborhoods to areas farther east, including the city of Gresham.

The north Portland neighborhood where the shooting occurred exemplifies the trend. Before Friday, the place once known for gangs had not had a shooting with injuries in nearly four years.

"It brings up a lot of old wounds," Simpson said.

Dani Gonzales, 64, has lived in the neighborhood for 25 years and said it's generally safe but there has always been some gang activity.

"Kids just get silly and get crazy ideas. I don't know what goes on in their heads," Gonzales said.

There was another school shooting in the Portland area in June, but it was not gang-related. A freshman killed another boy in a locker room, and a bullet grazed a teacher before the shooter went into a bathroom and died from a self-inflicted gunshot, police said.