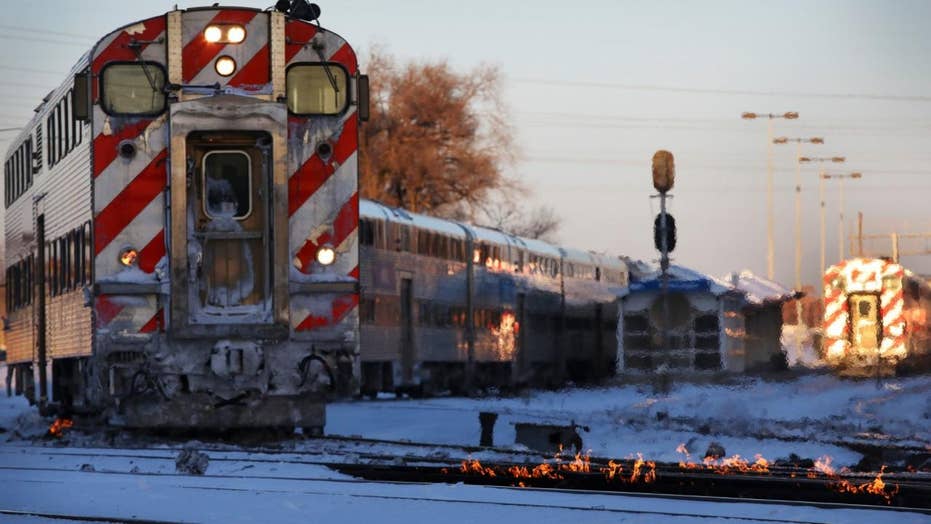 Chicago rail crews are ensuring the tracks don't freeze during the Polar Vortex through gas-fed systems that generate heat near the lines so the rails don't pull apart.

As the polar vortex blankets the Chicago area with life-threatening cold temperatures this week, rail crews are literally turning up the heat in order to keep trains running.

Chicago commuter railroad Metra is using a system that runs along rail tracks to generate flames and heat to prevent rail and switch defects from the extreme cold that could halt train service.

"Pull-aparts are rail defects in which two rails separate at their connection," the railroad recently said in an Instagram post. "They occur in extreme cold when the metal shrinks and the rails literally pull apart from each other."

Once the metal is warmed up and expands, crews can then reconnect the separated rails, according to Metra.

While it may appear to passengers on a train and in photos that the rails are on fire, Metra says that's not actually the case.

Metra said that it uses gas-fed heaters to combat the extreme cold, which can cause rails to “literally pull apart from each other." (Metra)

"Despite popular belief, the tracks themselves are not on fire," the agency said in a news release. "Instead, the flames come from a gas-fed system that runs adjacent to the rail, generating heat on the critical areas where the switches are supposed to make contact."

Chicago commuter railroad Metra says it uses flames from gas-fed heaters to warm the metal until it expands so rails don't break apart in the cold. (Metra)

Metra uses the system to help keep switches clear and from defaulting to  “fail-safe” mode, which Metra explains is when switches fail to make contact with the rail and complete an electric circuit. That halts all train traffic through the area.

"Winter weather will always be a challenge for the railroad, and though no railroad is free of switch issues, innovations like the switch heaters at A-2 help alleviate some of those obstacles," the railroad explains.

In Chicago, temperatures were still dropping after plunging early Wednesday to minus 19 degrees, breaking the day's previous record low set in 1966, though wind chills in northern Illinois made it feel as cold as negative 57 degrees.

About 1,300 of Wednesday's canceled flights in Chicago were at O'Hare International Airport, one of the nation's busiest. Governors in Illinois, Wisconsin and Michigan declared emergencies as the worst of the cold threatened on Wednesday.